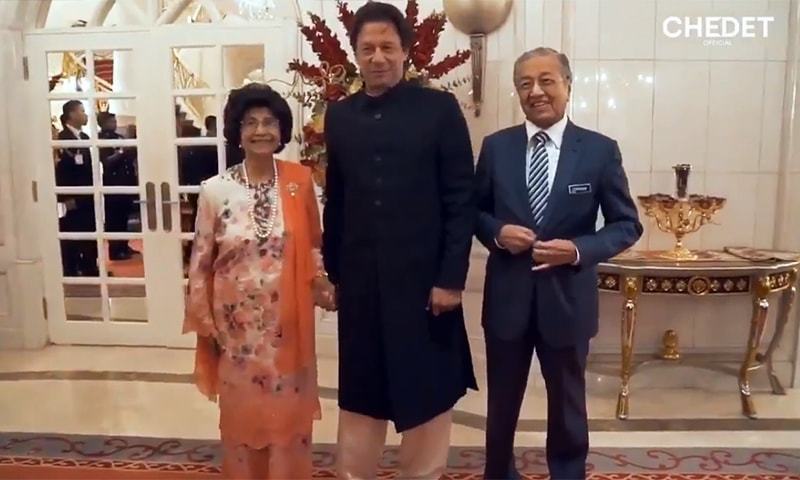 Malaysia’s First Lady Siti Hashmah recounted her incident of holding the hand of Pakistan’s premier Imran Khan during his official visit to Malaysia.

A video circulating on social media shows Dr. Siti Hashmah talking to a gathering of people about the exchange of cute gesture between her and PM Khan. She also talked about her bond with Pakistan’s premier Imran Khan.

People were burst into laughter when she jokingly asked the audience that if they were envious. Siti Hashmah said they posed for pictures with Imran Khan after having lunch.

“Mahathir asked to arrange for a picture-taking session. You know what happened. At that point, he was about to leave. So we took our positions. I asked him if I could take his hand. He said yes,” Siti Hasmah said.

The First Lady has said Imran Khan is like her son and he calls her his mother that’s why she held his hand. “So I took his hand. Why I did that is because he is another illustrious son who came to our humble home. So what is wrong with that? Why are you jealous?” she asked again.

She said that Vladimir Putin was another leader who visited their humble house at a time when they were sidelined and were not invited to many of the events. The lady said Vladimir Putin visited them on the way back from his official trip to Malaysia. Hence it was Vladimir Putin’s hand she held before Prime Minister Imran Khan.

“My daughter-in-law saw the reports online and she teased me that she was ‘ashamed’ of me flirting with Putin,” she said and sending the audience into a fit of laughter.

“Putin was one of the lustrous leaders who came to our humble house during an official visit to Kuala Lumpur during the 10 years when we were sidelined and not invited to many functions. He came to our house on his way back to the airport,” she said.

She also said due to the poor eyesight she once held the hand of another man instead of her husband. She said, “I was so ashamed. I scolded my husband and told him ‘this is what happens when you are not beside me’.”

Dr. Siti Hashmah brought a smile on the face of people when she approached premier Imran Khan with a request to hold his hand during an official photoshoot.

Katrina Kaif on reuniting with Salman Khan on ‘Bharat’: We both have the same mindset when it...

Hadiqa Kiani responds to fan for calling her aunty