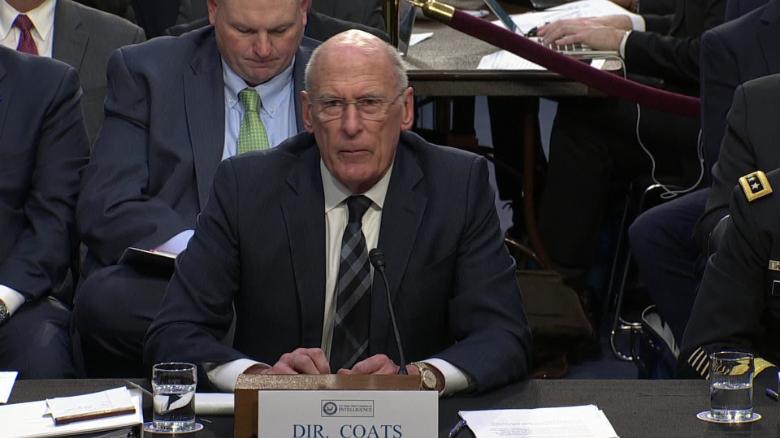 This is a battle between “America First” and what should be called orthodox America. Listening to the Director of National Intelligence Dan Coats, CIA Director Gina Haspel, and other Intelligence officials is like watching a movie from those old times when people still hung a calendar on their walls with certain dates encircled or when FBI officials wore suits and hats and delivered full sentences without shaking their heads or shoulders.

The old guard is speaking the old language where Russia is a threat, China is a threat, and keeping the European and Asian alliances as well as the American bases there are important for maintaining the global power of imperial America. The new annual report “Worldwide Threat Assessment” released on Tuesday believes that North Korea is unlikely to give up its nuclear stockpiles.

The Intelligence community doesn’t want the framework of things to be shaken since it has worked for them for decades now.

And that Iran, at least for now, is not going to “breakout” toward making a bomb. Gina Haspel said that the government in Pyongyang “is committed to developing a long-range nuclear-armed missile that would pose a direct threat to the United States.” Now, that is the opposite of what Trump believes; that “there is no longer a Nuclear Threat from North Korea.”

However, Dan Coats said that inside North Korea there is “some activity that is inconsistent with full denuclearization.” Regardless, Trump believes North Korea can be tamed with his charm offensive and Iran cannot be trusted and left alone, which Trump warned about that it would “be on the cusp of acquiring the world’s most dangerous weapons”.

My suspicion is that Iran is spared not because the Ayatollahs are embraced by Washington overnight, but rather that it is an attempt to appease the European allies of the United States because Trump exited the United States from the Joint Comprehensive Plan of Action (J.C.P.O.A) or what’s called the Iran deal, which was signed by the Europeans too. Europeans had been very upset by this move of Trump.

French leader Emmanuel Macron had been trying hard along with Angela Merkel to keep the deal alive. With Merkel exiting the political stage soon, Macron is the only influential leader left in Europe that Washington would need for diplomacy around the world. Similarly, last month Trump had abruptly ordered the withdrawal of US troops from Syria claiming “we have won against ISIS; we’ve beaten them, and we’ve beaten them badly”.

The new annual report “Worldwide Threat Assessment” released on Tuesday believes that North Korea is unlikely to give up its nuclear stockpiles.

While that announcement may have been the product of Trump’s show skills he honed at The Apprentice or may be one of his countless early morning outbursts expressed on Twitter, the critique of that decision, however, is disingenuous too. Orthodox America represented by these old-time Washington insiders strongly believe in keeping tabs on Russian presence in Syria, the only Russian outpost in the Middle East.

Syria to Orthodox America is less about IS and much more about the Russian base in Latakia. I can bet on this that if IS were in let us say Tuvalu– where Russia has no influence and there are no oil fields– the American intelligence chiefs wouldn’t have contradicted Trump’s withdrawal from Tuvalu. Trump called America’s intelligence agencies and officials “passive and naive”. In a ritualistic early morning, angry tweet Trump said, “Perhaps Intelligence should go back to school!”

Read more: Trump wages war against intelligence agencies: How far will it go?

Either the president wants them to learn tradecraft or he is giving them a curse to be in a condemned place such as a school. The latter explanation holds more water because Trump is notoriously bookless despite his large houses and offices, which would have sufficient space for bookshelves. The naiveté of the US Intelligence community is really a doubtful phenomenon given their global missions, global activities, and politicized intelligence.

Here is the funny part: Both Trump and the American Intelligence community are wrong. Both are pursuing their own agendas. Trump wants to be able to say in the next presidential campaign that he fulfilled his previous campaign promise; that he brought the soldiers home, yet he is also tough on terrorism by being tough on Iran, which also shines his pro-Israel credentials.

The Intelligence community doesn’t want the framework of things to be shaken since it has worked for them for decades now. The fear of what might be on the other side of a different approach leads to sticking to the status quo, which is what Trump wants to shake. In a nutshell, either one, doesn’t have the American people in mind while pursuing their different and conflicting agendas.

Punjab Food Authority on a Mission