Why does Trump want to keep deaths due to drones secret? 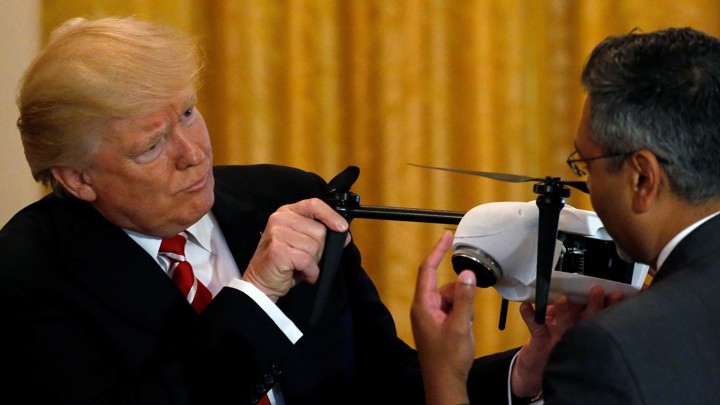 President Trump has revoked the rule that required the Central Intelligence Agency (CIA) to publish annual reports of the civilian death toll resulting from its drone strikes in areas where the United States is not officially at war such as Yemen and the tribal areas of Pakistan.

The rule was put in place by President Obama in July 2016. Drones were President Obama’s favored weapon of choice because it helps avoid American casualties in active battle. Drones are remote-controlled killing machines operated by people who basically have PlayStation skills since the design of the drone control is modelled on PlayStation.

The drone pilots like to call themselves pilots not gamers. Their argument is that these drones are planes except they are operating them remotely. They do not like the name Unmanned Aerial Vehicle (UAV) because according to them; there is a pilot controlling the aerial vehicle remotely.

The Amnesty International carried out an investigation of 5 out of the more than 100 drone strikes by the Pentagon in Somalia in 2017. Even in that tiny sample, it found 14 civilian deaths.

Sitting in little makeshift drone control stations parked in Nellis and Creech bases outside Las Vegas, these self-proclaimed pilots basically use their PlayStation skills on large screens displayed in front of them, except the people they are killing by unleashing the hellfire missiles are real human beings. The biggest threat to the lives of these gamers’ in drone warfare is the drive between home and work.

Trump administration argued that they are ending the Obama-era rule of publishing annual reports of drone death toll because there is already a law in place that requires the Pentagon to publicly report on any civilian deaths resulting from any of their operations. However, what is important to understand here is that that law requires only the Pentagon to do so not the CIA, which is involved in drone strikes in regions where the US is not at war officially. President Trump wants to keep those deaths secret. The drone campaign has broadened under Trump.

In the fight against the Islamic State in Iraq and Syria, the Pentagon said that the American led coalition killed 1257 civilians as of the end of January. But Airwars, a university-based monitoring group, found that actually 7500 civilians had been killed in Iraq and Syria.

The Obama administration had said that during its two terms the number of civilian deaths resulting from drone strikes was between 64 and 116 in 542 airstrikes outside major war zones. Micah Zenko, co-author of a new book, “Clear and Present Safety,” calculated the real tally at roughly 324.

Many are criticizing President Trump’s move as anti-democratic and anti-transparency. The New York Times Editorial said, “A lack of transparency and accountability for civilian deaths helps enemies spin false narratives, makes it harder for allies to defend American actions and sets a bad example for other countries that are rapidly adding drones to their arsenals. It could also result in war crimes, as some critics have claimed.” I do not disagree with it.

President Obama basically threw some pocket change for human rights activists to think they have won a battle in favor of the civil liberties and the preservation of the democratic norms. Such a strategy helps the water from boiling.

However, I wonder if the purpose of transparency and accountability was served with Obama’s transparency-lite? I wonder if anyone even dared to think, let alone executing the idea that President Obama be tried for war crimes? What he did was in a way modelled on the strategy of the Mexican and Colombian drug cartels.

The cartels advertently let the American Drug Enforcement Agency (DEA) bust a significant amount of drug shipment arriving in Florida or Texas to make them believe that they made a huge dent in the drug business. In reality, while the DEA agents enjoyed drinks at the bar that night celebrating the huge drug bust, the gigantic shipment was ferried, flown, and tunneled into America away from the attention of the DEA.

President Obama basically threw some pocket change for human rights activists to think they have won a battle in favor of the civil liberties and the preservation of the democratic norms. Such a strategy helps the water from boiling. It keeps the temperature just right. Furthermore, President Obama had adopted this rule during the last few months of his presidency, which was disingenuous because he didn’t mean the rule for his administration but rather for the next one.

President Trump’s move is surely against democratic norms because only an informed citizenry can establish a healthy democracy. I also believe it is counter-productive because such a tight lid on no reporting on any drone deaths could create more unrest among the human rights activists and consequently, there would be more noise about the drone deaths, which frankly has been a topic on the back burner since Trump assumed the presidency. Trump’s tightening the noose on the information flow from death toll by drones would create more curious minds who would ask to know more.

Out of sight, out of mind would n’t work here. This is a situation that calls more for hiding in plain sight. President Trump has shown a remarkable tendency to tell lies after lies anyway so, why not lie about the number of deaths rather than completely keeping the information hidden and raise curiosity? President Trump denies facts and advocates for fiction.

Read more: Will Trump continue with the drone wars?