Why Govt must send “Judge’s Reference” to Supreme Judicial Council?

What is the state of mind, quality of education and world view of a judge who actually writes something like that in 'black and white' in an official judgement next to a court seal representing a state? Can this primitive medieval "mind set" be allowed to exist on a high court bench; can such a man be elevated to Supreme Court of Pakistan? Government need not collect past cases or evidences, it only needs to send a Reference to Supreme Judicial Council centred on Para-66. Let the Supreme Court of Pakistan grapple its responsibility and the burden of history. 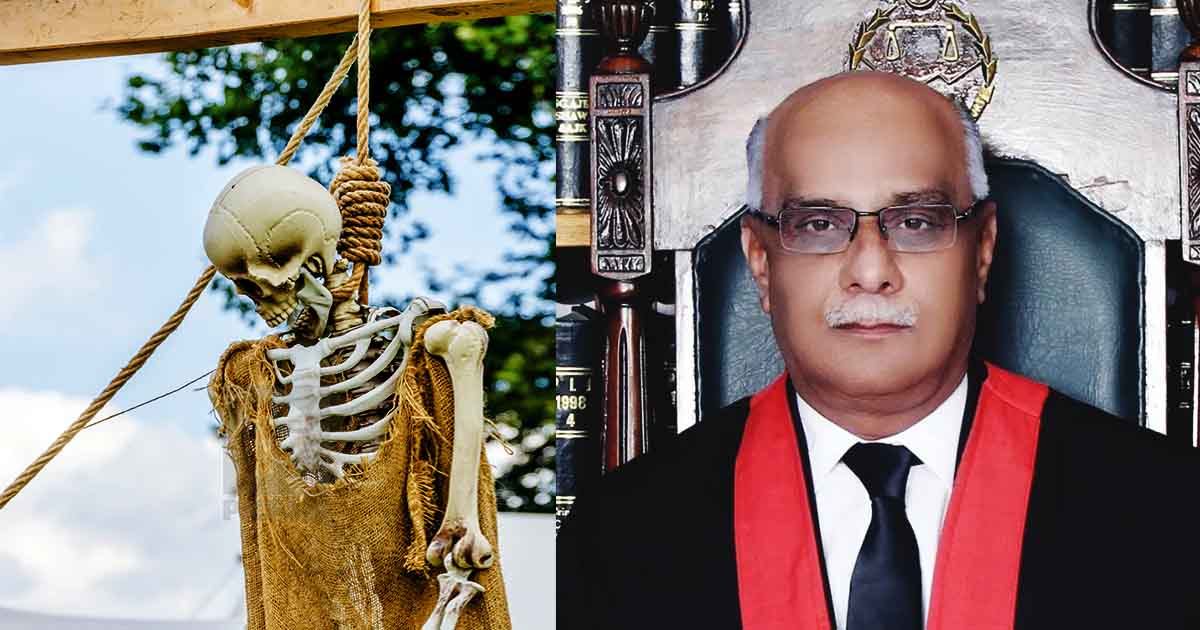 Many lawyers, members of Bar Associations, retired Judges and media commentators are now making a case that Govt. should not rush to Supreme Judicial Council because its reference against the crazy judge, Waqqar Seth may not be admitted, may not meet the legal requirements, may not be a fit case for declaring the judge medically “insane” and so on.

They are wrong -and they may also represent a clandestine effort to frustrate and defeat the “right thing” government needs to do. PTI government and its ministers also appear confused. They fear that this may represent another confrontation with the judiciary and since all Bar Associations will support the “crazy judge” therefore chances of success are slim.

Cromwell saga represents an England that was struggling to emerge from its medieval era. Criminals and rebels were often quartered and their bodies dragged without sledges on streets

Unfortunately, PTI government – and its multifarious allies of all colours and shades in and outside the parliament – have never been known for “moral clarity” and with every next compromise this motley crowd is weakening its position.

First let me connect those who may have missed the context for one or the other reason. I am referring to the infamous “Para-66” of the verdict of a special court in Pakistan that awarded death sentence to Gen. Musharraf, ex-President of Pakistan for his Nov 2007 decision of imposing emergency and detaining judges he had forcibly removed through a Provisional Court Order (PCO of Nov 3, 2007) which was later deemed invalid by a restored Supreme Court in 2009.

I am not discussing the verdict of death sentence – though there is much to discuss there, but here I am exclusively concerned with the “Para-66” of the verdict in which Waqqar Khan Seth, presiding judge of the Special Court (who ironically also happens to be the Chief Justice of Peshawar High Court) wrote that:

“We direct the law enforcement agencies to strive their level best to apprehend the fugitive/convict (Musharraf) and to ensure that the punishment is inflicted as per law and if found dead, his corpse be dragged to the D-Chowk (in front of the Parliament House), Islamabad, Pakistan, and be hanged for three days.”

D-Chowk is a popular land mark in Islamabad, Pakistan’s capital famous for political speeches and rallies. And the sentiments are apparently drawn from the 17th century exhumation and post-humous execution of Oliver Cromwell and other regicides at the orders of Charles-II.

Most in Pakistan don’t realise that post-humous execution of Cromwell, on 30th January of 1661 was arranged exactly on the anniversary of beheading of Charles-I ordered by the High Court of Justice on 30th January of 1649. It was to take revenge for the regicide in a medieval era England where 12 other regicides (who were found alive in 1659) were quartered and their bodies were dragged in streets.

To most Pakistanis, including many in the legal community, Cromwell saga represents the plight of a usurper who had destroyed parliament and was punished to restore democracy or rule of law. Pakistanis also apparently believe that England became safe for democracy after the post-humous execution of Cromwell.

Read more: Was Musharraf’s verdict a good judgment under the lens of law?

In reality, this 17th century saga is part of the English civil wars when briefly between 1649 and 1659, England was declared a republic after the defeat of Stuart Kings at the hands of parliamentarian army raised by a defiant House of Commons.

Cromwell was not a solider but a parliamentarian (Short & Long Parliaments, 1640-48) who ended up becoming a commander in the parliamentarian army. In 1899, British Parliament commissioned an expensive bronze statute to commemorate services of Oliver Cromwell to British democracy and this still exists outside House of Commons. I have recently explained all this in a video blog to educate young Pakistanis.

But Cromwell saga represents an England that was struggling to emerge from its medieval era. Criminals and rebels were often quartered and their bodies dragged without sledges on streets. A High Court judge, in Pakistan in 2019, first half of 21st century, writing in a court verdict dealing with the ex-President of the country that “his corpse be dragged to the D-Chowk (in front of the Parliament House), Islamabad, Pakistan, and be hanged for three days.” represents an unacceptable side of Pakistan’s own primitive medieval psyche.

Many on streets, in politics, on media use such a violent language. But this is not a mere catharsis of a frustrated public. In past 20 years there has been more than one instance of a tribal jirga implementing primitive medieval era punishments.

Mukhtaran Mai’s who was gang-raped on the orders of a tribal jirga of Mastoi tribe in 2002 is one example known world wide but many more such instances – in the context of “Wani or Karo-Kari” may have happened and some were reported too. But can this be accepted from a High Court judge?

Courts and judges are different from Jirgas. Court derives its power and authorisation from either a constitution or some statute. It does not operate in a vacuum. How judge “Waqqar Seth” justified his order in Para-66, where he derived legitimacy and authority for this order remains to be examined.

What is the state of mind, quality of education and world view of a judge who actually writes something like that in ‘black and white’ in an official judgement next to a court seal representing a state? Can this “mind set” be allowed to exist on a high court bench; can such a man be elevated to Supreme Court of Pakistan?

What’s the right thing to do?

Coming back to the Question: Should the government file the reference against this medieval era mentality judge, Waqqar Seth, to the Supreme Judicial Council or not?

Most in the Bar Associations will not welcome that. And many lawyers and media commentators specialise in obfuscation, in creating newer issues and sub-themes to distract from a subject and defeat the “Truth”.

Thus the latest arguments, being debated on the media channels are that: Supreme Judicial Council may not (or should not) accept reference built around a court judgment, that judge’s “mental competence” or ‘insanity’ can only be determined through a medical board; reference will weaken Pakistan’s position in the ICJ because a past decision of this judge was quoted in proceedings there and finally that government may be embarrassed because of its failure in getting the Judge Seth disqualified from Supreme Judicial Council.

All these arguments are patently dishonest arguments (some like the reference towards ICJ are based on flawed assumptions) appear to be part of a well planned political campaign to frustrate and stop the government from doing something “right” which this government has to do for preserving the sanity and self-image of the nation state of Pakistan.

Fundamental reality is that elected Government of PM Imran Khan, Supreme Court of Pakistan and its Supreme Judicial Council are answerable to history and to global consciousness. No amount of legal chicanery, references to this decision or that, or sub-sections of one the other law can be allowed to defeat something which represents a state’s “moral responsibility” towards its people and to the world in the beginning of 21st century.

If we lose out to the trickery of lawyers and media spin masters then we will accept that Pakistan is such a primitive nation that a High Court Judge who displayed his “medieval mind set” in writing in an official verdict was not challenged because of mere technicalities.

Absolutely not! Some quarters, perhaps in a deliberate attempt to confuse and defeat the government initiative had suggested that some previous judgments of the same judge (eg, Release of terror accused etc) should also be made part of the Reference to Supreme Judicial Council.

Logic is that it will show that this judge is consistently erratic or unreasonable. This is either plain stupid or a conspiracy. Any additions to the reference will only weaken it. – and dilute the enormous significance of the savagery of “Para-66” Any such additions will give rise to a bigger debate, will broaden the proceedings and will backfire.

Let judge explain its position. Supreme Court and Supreme Judicial Council both are responsible to the Pakistani nation, history and the world. Many quietly fear that Courts in Pakistan have often operated in whimsical fashion.

A bizarre looking petition from a character without any credibility or suspicious antecedents may be accepted and a substantive petition from a trustworthy citizen may be rejected or left lying for years without being taken up. Well meaning and most intelligent arguments are shot down and patently superficial arguments are sometimes accepted.

While there may be elements of truth in such fears, but I am pretty hopeful that Supreme Judicial Council will not submit to excuses of trivial legal lacunae or technicalities to reject or delay applying its mind to challenge of Para-66. We all are answerable to history – including Supreme Court of Pakistan. Let the Apex Court apply its mind to the gravity of “Para-66” and its implications.

Moeed Pirzada is Editor Global Village Space; he is also a prominent TV Anchor and a known columnist. He previously served with the Central Superior Services in Pakistan. Pirzada studied international relations at Columbia University, New York and Law at London School of Economics, UK as a Britannia Chevening Scholar.

CCTV footage of Abidi’s assassination: what is the motive?

PM Khan advises supporters to stay calm and stand by him

Video of salute to doctors goes viral on social media