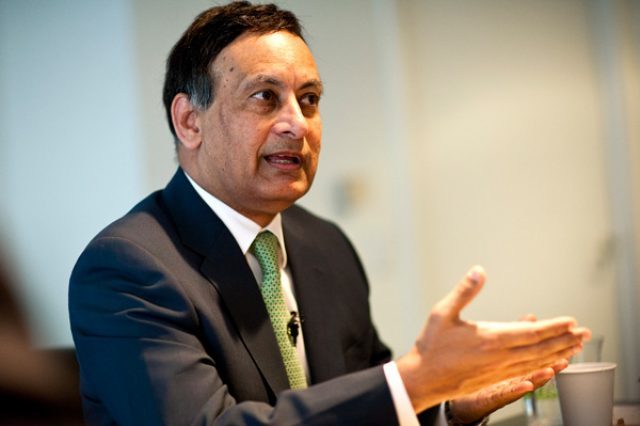 The FIR mentioned that the former ambassador made some derogatory remarks about Pakistan during an interview in the US. It is stated that Mr. Haqqani’s objectionable remarks have undermined the country’s national security and challenged the sovereignty. “Haqqani deliberately issued venomous remarks on Pakistan, its forces and the Kashmir cause,” read the FIR.

Mr. Haqqani has also been held responsible by the complainants for the Memogate scandal and for issuing visas to CIA and Indian agents when he was in the office.

Mr. Haqqani has a controversial past; he has been the member and head of Islami Jamiat-e-Talaba, the student wing of the Jamaat-e-Islami during his stay as a student at the Karachi University. He has also been the supporter of military dictators Zia-ul-Haq and spokesperson of ousted Prime Minister Nawaz Sharif in 1992. He has also worked as the spokesperson of Benazir Bhutto in 1993.

Why a treason case against a former Ambassador?

It is alleged that a week after the Osama Bin Laden in Pakistan, Mr. Haqqani who was serving as Pakistan’ s ambassador to the United States communicated with a Pakistani-American businessman Mansoor Ijaz to convey a message to the Americans. The message was passed on the request of then-president of Pakistan Asif Ali Zardari. The message was that Pakistan’s military was conspiring against the civilian government to topple it down. The message was passed by Mr. Ijaz who later on shared all the details in a piece he wrote for the Financial Times in October 2011. It was also mentioned that the message was conveyed to Admiral Michael Mullen, the Chairman of the Joint Chiefs of Staff of the US military. The memo also mentioned about the military’s weak position after Bin Laden saga and a “unique window of opportunity” for the Zardari-led PPP government to bring the men-in-uniform under control.

Amidst the controversy, Mr. Haqqani resigned from the ambassadorship but denied all the allegations leveled against him. He came back to Pakistan and was accused of high treason. The government initiated a parliamentary investigation to probe into the matter. The Supreme Court of Pakistan, however, ordered to form a judicial commission on the basis of a petition filed by the Pakistan Muslim League-Nawaz (PML-N). Haqqani was earlier not allowed to leave the country but later on, the SC allowed him to go abroad.

The commission completed its investigation and found that Haqqani indeed wrote a memo and the underlying purpose was to ensure the United States that the civilian government in Islamabad was her ally.  It was also claimed in the report that the former ambassador was not loyal to Pakistan. The SC did not give any weigh to the report, terming it as mere opinions of the members.

Mr. Haqqani is known as “The Last Friendly Pakistani” and “an instinctive ally of the west” in the western media for his political position on various domestic and global issues.

Bruce Riedel, one of the foremost authorities on Pak-US relations, wrote a book titled Deadly Embrace: Pakistan, America, and the Future of the Global Jihad in 2011 in which he made an effort to explain the nature of a tortured relationship between Pakistan and the United States since 1947.  Although the book reflects an utterly American perspective yet the author has adequately identified the causes of “authoritarianization” in Pakistan. One of the chief reasons is, points out the author, the United States’ constant approvals and supports for the military regimes in Pakistan. The USA is not, and has never been, interested in genuinely democratizing Pakistan rather her focus has remained on bringing in some selected men and women at top who can better serve her (USA) interests in South Asia.

Read more: Was Ambassador Haqqani implementing the policy or making it?

It is in the United States’ best interest to maintain a divide between Pakistan’s civil and military leadership in order to get benefit from the vacuum generated by the tussle between the two. Civilian governments in Pakistan have generally a habit of seeking western legitimacy and like the present government make all efforts to present anti-army stance to please the US establishment. Our politics makes a better sense if seen from this perspective as to how the US maintains a tension between Pakistan’s military and civilian leadership and support the later in order to counter, or weaken, the former.

Mr. Haqqani’s case makes an interesting sense if seen from the standpoint narrated above.

Is the U.S military in the Gulf really “weakest” in history?