Why is it important to celebrate Women’s Day? 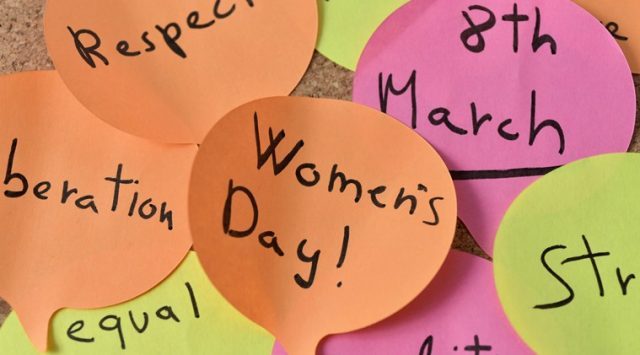 Like many other International Days, Women’s Day in Pakistan divided our society. There were ‘liberal feminists’ who celebrated the day and expressed their views without any fear. To counter liberals, there were political workers of right-wing political parties, and students of religious seminaries apart from the conservative segment of Pakistani society who not only refused to celebrate the day, but also made fun of what feminists were doing.

Pakistan is an interesting society where extremism exists in myriad forms and types but moderation is something very rare to be found in our socio-political context. Those who claim to be liberals are no different from those who claim to be Islamists. Extremism is an essential ingredient which defines the character of, and underlying Machiavellian political intentions behind the existing narratives of Liberalism and radical Islam. Ideological positions taken in such intellectually drained and politically intense atmosphere are likely to be a demonstration of cultural confusion and political perplexity.

Women’s Day is only a reminder for both women and men. For women to realize them about their real potential and for man to encourage them to acknowledge “her” presence in a world where “she” is voiceless.

Present-day Pakistan where politics of ethnicity is on the rise and people are unable to trace out their historical and ideological origins to give meanings to their loves; women are a subject to both domestic violence and political suppression, and above all, women are struggling to seek independent individual identity.

As a matter of fact, we need to understand that extremism is not a solution to our problems. Those who think Women’s Day is not important need to be taught as to why is it so important to celebrate? And that so-called liberal who become as radical as the right-wing thinkers are, need to adopt a moderate middle way. This is what is required for both stability and upgradation of our society. Rest of the article is a reminder, an argument or whatever you prefer to term it, for Pakistani men and women to celebrate ‘her’ Day.

A woman has an existence, therefore, she must have an individual recognition in a society where identities matter more than anything else. But generally in male-dominated societies identities belonging to man matter more and gender identity particularly when it is about woman becomes a non-issue. Considering someone weak, irrational and emotional fool is not something really appreciable rather these adjectives belittle, disregard and undermine the existence, independence and potential of women.

Acknowledging women’s separate existence and identity means to regard the way women look at the world, view relationships, make independent choices and become economically independent. Majority of women both educated and un-educated in Pakistan are living in a state of, in Marx’s language, False Consciousness. They have been told to serve their husbands, bear all the oppression and suppression, and not to question. They have been advised to avoid the public sphere, and respect ‘their’ men by remaining silent.

Women in our culture are to be facilitators for men to fulfill their dreams. Women’s dreams, desires and expectations are not that much important. Only a smile of her husband should be a greatest reward for her all sacrifices.

Silence is a considered as a token of reverence in almost every patriarchal social system. These norms undermine the idea of the existence of women. Nature has created women for a greater purpose, not for serving men and their families. Constraints are put by those who fear when women will get an opportunity to freely express their potential status as powerful, wise and successful creature will get challenged.

I intend to make a case that we need to view the world from a women’s standpoint. It will then make a better sense as to what it means to be a woman? Let’s imagine a horrible situation when no one listens to what you have to say and you are supposed to do what someone else is asking you to do. How does it feel? It is not easy to be submissive without any condition. It pains. It destroys. It kills. And a woman has to bear it all. . .

Women in our culture are to be facilitators for men to fulfill their dreams. Women’s dreams, desires, and expectations are not that much important. Only a smile of her husband should be the greatest reward for her all sacrifices.

Those who think we do not need to celebrate women’s day and every day is women’s day are mistaken. They view women from a man’s perspective. They don’t know what it means to be a woman in a society like ours where almost every other woman is a slayer of her own dreams and desires. Women’s Day is only a reminder for both women and men. For women to make them realize their real potential and for men to encourage them to acknowledge “her” presence in a world where “she” is voiceless.

End to subsidy on Hajj: Finally compliant with Islam?