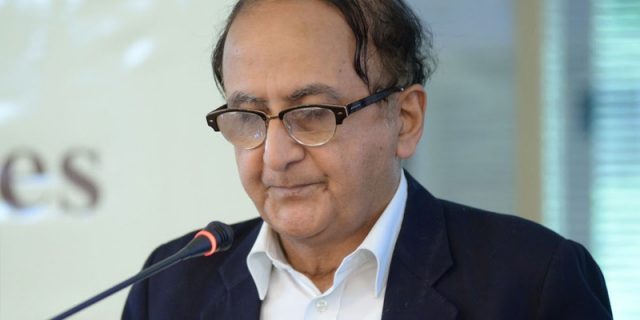 Professor Hasan Askari Rizvi, much to the dismay of the PML-N took oath as caretaker Punjab chief minister at Governor House today [June 08]. Pakistan Election Commission on Thursday nominated him as the caretaker CM of the most populous and politically all-import Punjab province.

Earlier, a parliamentary committee comprising of PML-N and PTI legislators failed to reach a consensus over the proposed candidates. According to the constitution of Pakistan, ECP has the authority to decide on the caretaker CM. Askari is a highly respected figure at home and abroad. He is a renowned political scientist and military analyst who is currently serving as professor emeritus of political science, Punjab University.

He served as a former visiting professor of Pakistan Studies at the Columbia University from 1996 to 1999. Earlier, he also served as Allama Iqbal Professor at Heidelberg University, Germany, from 1988 to 1991. In a career spanning more than 35-years, he has been associated with teaching and research at the postgraduate level. In 2010, Askari was awarded Sitara-e-Imtiaz.

PTI demanded ECP take notice of the situation. On May 29, it wrote a letter raising objections over the appointment of Asma Hamid as the advocate general of Punjab. She is known to have close ties with Sharif family.

He has also published a number of books, including ‘Military, State and Society in Pakistan’ and ‘the military and politics in Pakistan: 1947 – 1997’ among others. He has also written numerous opinion articles in national and international newspapers and magazines.

After taking oath as the interim CM, while talking to the private channel, he said that caretaker Punjab government will ensure free and fair elections and no one should worry about the transparency of the upcoming polls.

PML-N had opposed his selection as a candidate. It rejected Askari’s nomination and called him a partisan person for the position of CM. Former PM Abbasi termed it a partial appointment because Askari had been openly writing against PML-N and very often spoke against his party on TV channels.

Former interior minister Ahsan Iqbal hinted that crises will emerge if elections are made controversial with such appointments. It will be poisonous for the country, he added. Former railway minister acknowledged his credentials as a learned man but opposed his nomination because he is a supporter of PTI. It had appealed ECP to withdraw his name.

Brushing aside this criticism, PTI has welcomed the professor after making a blunder, when it nominated Nasir Khosa in haste and took back his name after criticism from within the party. PTI said reservations over the CM are absolutely baseless.

Askari is a highly respected figure at home and abroad. He is a renowned political scientist and military analyst who is currently serving as professor emeritus of political science, Punjab University.

Askari has also responded to the backlash from PML-N. He said, they have a right to express reservations, but it does not affect me. I am here to fulfill my constitutional responsibilities, he added. His nomination enraged the former government. The province which resides almost half of the 208 million population of the country plays a critical role in the politics of the country.

PTI has also accused PML-N of making politically motivated transfers and appointments of grade 21 and 22 officers in last weeks of its tenure. PTI demanded ECP take notice of the situation. On May 29, it wrote a letter raising objections over the appointment of Asma Hamid as the advocate general of Punjab. She is known to have close ties with Sharif family.

Read more: Will General Elections 2018 be held on time?

PML-N wanted to ensure early elections because it enjoys bureaucratic dominance in Punjab. Because it can use its dominant position in the bureaucracy to affect the elections. Hassan Askari had been supporting and advocating delay in elections. This is why this appointment has angered PML-N.

On the other hand, PTI is challenging PML-N’s unfair advantage due to desired appointments of bureaucrats.  It does not matter how honest and professional an official be, a level playing field should be provided to all the political parties and the old blessed [lords] should be replaced to ensure fair and free elections.

Hassan Askari is brought exactly to control the dominant position of PML-N, to ensure fair and transparent elections.

On the 40th anniversary of 1979 embassy siege, US slaps more sanctions on Iran