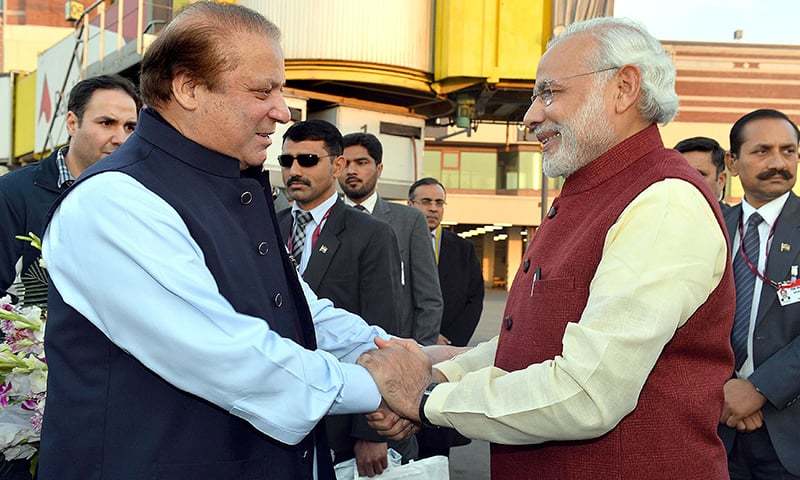 Indian hardliner party Shiv Sena, according to an editorial in Saamana, wants Prime Minister Narendra Modi to ban Pakistani film and artists. “Can the government declare that those who give work to Pakistanis are the enemies of India,” the editorial read. (In September, the party had given Pakistani artists a 48-hour deadline to leave the country).

Home Minister Rajnath Singh threatens that “Pakistan has been divided into two countries (in 1971). If it does not stop cross-border terrorism, it will soon be in 10 pieces.” His premier, Modi, plus National Security Advisor Ajit Doval are threatening to wage a water war on Pakistan and to turn Balochistan into Kashmir (by offering support and asylum to dissidents such as Brahamdagh Bugti). And a good number of Indian intellectuals and former civil-military officials concur; one can glean from bilateral interactions that they endorse Modi’s rhetoric on water and Balochistan as “expanded strategic options” that he is exercising to rein in and teach a “reticent and wayward” Pakistan a lesson.

A few saner elements in India appreciate the complexity of the geo-politically driven conditions. There will be a need, they suggest, to renounce narrow strategic and political interests for the larger cause and this will have to be a joint effort by Pakistan, Afghanistan and India. Such an approach can ultimately help resolve old outstanding issues which could unleash unprecedented geo-economic dividends for all.

This cacophony of statements against Pakistan smacks of a strong sense of self-righteousness that borders arrogance. It invariably reminds me of  a conversation I had with the former Israeli prime minister Shimon Perez a decade ago at his office back in April 2006: You will see the benefits if Pakistan enters into even a working relationship with us. He asked, probably rightly, what was the point in acrimony if Pakistan had no direct dispute with Israel. He pointed to Israel’s business relations with the UAE and Turkey. He also pointed to the utility of Pakistan-Israel relations for their impact on Pakistan-US relations. There are enormous benefits out there, Perez had told us during his meeting with a German media delegation. Many Indians frame their responses in more or less similar way by pointing to the “dividends of peace” that “Bangladesh Nepal and other South Asian countries are reaping from their “redefined relationship with India.”

Little do the Indians realize, however, that Pakistan is not to India what Palestine is to Israel and nor is Pakistan another Bangladesh, Maldives, Sri Lanka or Bhutan. What is also lost on many Indians is that Pakistan is to China what India or Israel are to the United States. Also, despite all the past mistakes and the baggage of unholy alliances with non-state actors, Pakistan still enjoys the empathy of Turkey, China, Russia and proximity to Iran—something many Indians visibly cannot stomach.

Only a few would agree that bi- or multilateral international relations are usually defined by mutual needs and not personal relations between two individuals, unlike the personal diplomacy that Modi has tried to espouse. Trans-border relations with Nepal and Bhutan or Sri Lanka may hinge on Modi’s personal whims but they are different among all those who partnered in sins such as the anti-Soviet Afghan jihad and the anti-jihad war on terror. Those sins were committed as part of geo-political games as well as in the pursuit of geo-commercial interests.

Few saner elements in India, though, do appreciate the complexity of the geo-politically driven conditions in south/west Asia. They also agree that such conditions should not be used as a pretext for deferring confidence-inspiring measures through engagement.

This minority also thinks that achieving the aforementioned objective will require respective positions to be re-framed. There will be a need, they suggest, to renounce narrow strategic and political interests for the larger cause and this will have to be a joint effort by Pakistan, Afghanistan and India. Such an approach can ultimately help resolve old outstanding issues which could unleash unprecedented geo-economic dividends for all.

This proposed path would therefore be ideal but given the current Modi-led mood it hardly elicits any confidence for the simple reason that the messaging out of New Delhi appears unflinchingly ballistic and complicating. The Indian leadership insists Kashmir is an internal problem for India and that the February 1994 joint parliamentary resolution (which declared Kashmir an integral part and demanded the vacation of Pakistan-occupied Kashmir) takes precedence over the UN Security Council resolutions, despite the fact that they acknowledge Pakistan as a party to the conflict. The option of turning the Line of Control into a quasi-permanent border has closed and Pakistan should brace for a) more punishment (read Balochistan via Premier Modi’s August 15 speech) and b) be ready for consequences in AJK/Gilgit-Baltistan.

Little do the Indians realize, however, that Pakistan is not to India what Palestine is to Israel and nor is Pakistan another Bangladesh, Maldives, Sri Lanka or Bhutan. What is also lost on many Indians is that Pakistan is to China what India or Israel are to the United States

We are told that India under Modi is now thinking of “mainstreaming Kashmir”, ruling out thereby any bilateral discussion on the issue any more. Article 370 (in the Indian Constitution notwithstanding), New Delhi is not inclined at all to negotiate on Kashmir with Pakistan any more. This position essentially sets an alarming precedent for disregarding UN legislation. It precludes any recourse or allusion to the UN resolutions about an “unfinished conflict” sitting on the agenda of the world body.

By implication, such posturing will likely serve as a tool to defeat any India-sponsored resolution at the UN. Countries such as China and Russia in particular will likely benefit from it—at least until India becomes a permanent security council member. If it is the foundation for Kashmir’s future, then it’s again a recourse to what Ajit Doval had said in February 2014 i.e. the only unfinished agenda is the liberation of “Pakistani-occupied Kashmir.”

That is the neo-normal, they say, peddling a phrase borrowed from the Chinese, who coined it to denote the exceptional annual growth trajectory of China. For some, the post-Wani protest movement, which Kashmiris revere as the latest “intifada, gives expression to the resentment of only a few and should not be mistaken for a “craving for azadi.” Wani epitomized, some say, the Daesh/IS phenomenon, which “common Kashmiris hate and disapprove”. Given what has unfolded in the months since Wani’s killing on July 8, such statements do underscore a certain degree of arrogance that the American Professor Barnett Rubin once said, “comes with the sense of sole super power”.

There is no doubt that Pakistan has bled itself by adopting controversial means, some of them extremely questionable and self-destructive, but most Indians decline to recognize the fact that since 2008 Pakistan has seen the back of three Army chiefs, two political transitions, and considerably success against local terrorist networks.

Of course, durability of military and political transitions as well as transaction of the redefined relations with China and Russia would largely depend on how and whether Pakistani leaders, both civil and military, re-calibrate their approaches to embrace a new forward-looking governance regime anchored in the fundamentals of geo-economics. Therein also lies the response to the Indian moves to “isolate and bleed” Pakistan.

Imtiaz Gul, is founder and Executive Director of Centre for Research & Security Studies, an Islamabad based think tank. He is a prominent columnist and author of several books on South Asia including “Pakistan: Before & After Osama Bin Laden” Read more about him: http://www.imtiazgul.com/biography.html

This article first appeared in Friday Times: 10 pieces of advice

Attack on Indian Army in Uri, Kashmir, Pakistan & United States: Cui Bono? Who benefits and How

ICC is all praise for the spectacular Gwadar Cricket Stadium

APEC summit: The rise of China?