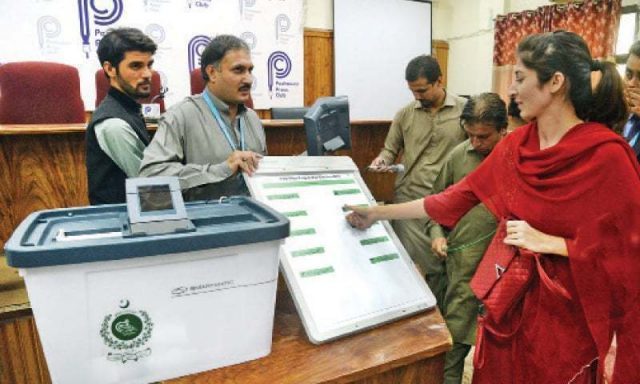 Pakistan Muslim League-Nawaz (PML-N) and Pakistan People’s Party (PPP) have opposed the introduction of a new voting system which will allow the millions of overseas Pakistanis to vote in the upcoming 2018 general elections.

Supreme Court has said that the final decision pertaining to approval of the online voting system will be taken by the parliament.

Supreme Court had taken up the case after the petitions were filed by the Pakistan Tehreek-e-Insaf Chairman Imran Khan and other citizens pleading that the overseas Pakistani’s cannot be denied their constitutional right of voting. The Overseas Pakistanis have the right to participate in the electoral process.

A three-member SC bench headed by the Chief Justice of Pakistan Mian Saqib acknowledged that denying overseas Pakistani’s their right to vote is in contradiction with the constitution of Pakistan.

The National Database and Registration Authority (Nadra) has prepared a software which was presented to the apex court on April 12.

Nadra had prepared the software in collaboration with Elections Commission of Pakistan (ECL) at the cost of 105 million rupees.

“The task was of a difficult nature because it had to be ensured that the voting system could be safe, reliable and accurate.”

The presentation was held in the SC auditorium in the presence of representatives from different political parties, television cameras, and IT experts.

Majority of the experts believe that major threat will persist if ECP goes ahead with the designed software. Based on feedback from the mock test, ECP has shown reluctance to use the software straightway unless more tests are not conducted prior to introducing the software in 2018 general elections.

Based on the evidence presented, CJP accepted that an expert opinion is needed to reach the final conclusion on the matter. The court does not want to create any controversy on the matter, because, any decision taken in haste could certainly have an undesired impact on the elections.

There is a possibility that court will make a task force to present a report of threats which could sabotage the online electoral process.

Apparently, both Nadra and ECP believe that a lot needs to be ensured before making a big call to allow the overseas Pakistanis to vote in the upcoming 2018 general elections.

Both the institutions apparently fear a scandal, which cannot be ruled out, despite Nadra’s insistence that precautionary measures are taken. Yet there are always possibilities of meddling and threats, because in the past other countries, which introduced such programs, faced pertinent threats from hackers.

It may have been used successfully in Brazil, as pointed out by PTI, but the court was told that countries such as the Australia, Germany, Netherlands, Norway United States, and France faced online manipulation and systems were apparently hacked.

Among the 1 crore Pakistanis who reside abroad, 5.8 million people have the National Identity Card for Overseas Pakistan (NICOP), which makes them eligible to vote, but have not been able to cast votes due to the unavailability of an online voting system in Pakistan.

Read more: New policies by Facebook to stop interventions in elections, including Pakistan

If the overseas Pakistani’s are allowed to vote, it can have a profound impact on 2018 elections. This is why PTI has always been the greatest campaigner to include overseas voters in the electoral process.

In the proposed system, computer literacy is a necessary requirement.  Overseas voters will have to register on the website created especially for voting, using a verified email address. Every individual will have to give answers to a few confidential questions.  Then the voter will be sent a passcode to vote within a given time period to kick-start the voting process.

But, there remain certain threats such as data transfers to the third parties. Furthermore, secret balloting can be compromised, impersonation is a possibility and forced voting cannot be ruled out.

Moreover, Distributed Denial of Service (DDoS) attack can make the service unavailable for voters by overwhelming it with traffic from multiple sources.

“PPP and PML-N are against the inclusion of overseas voters because PTI has always maintained that overseas diaspora needs it.”

PTI might be the biggest beneficiary if this happens, which is why the other two largest parties PPP and PML-N are opposing this decision. They are citing security threats to the online voting process as the reason behind their reservations. These threats are pertinent and cannot be ruled out, even Nadra chairman admitted that no system can be foolproof, but precautionary measures can prevent threats.