Why the new CJ should focus on judicial reforms 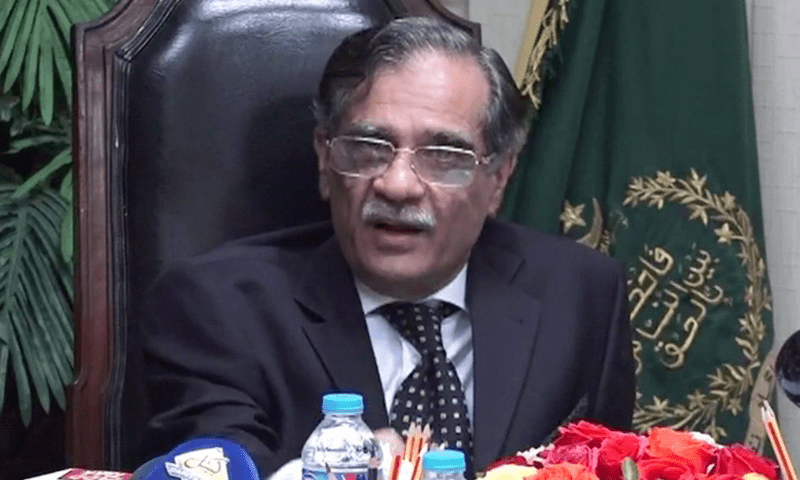 The new chief justice of the country’s apex court Justice Asif Saeed Khoso is going to assume his office on the 18th of this month. The tenure of his predecessor justice Saqib Nisar marked with endless invoking of suo-motuism under article 184(3) of the constitution and hyper-activism is about to end. His mission to rectify the other institutions rather than bringing about desperately needed reforms in his own institution will overshadow his brilliant performance in the annals of judicial history. He himself has admitted this fact on the number of occasions that he had been unable to put his own house in order.

Now, with the new chief justice in the office, it is highly expected that urgently needed reforms in the judicial system of our country would see the light of the day. Justice Asif Saeed khosa who is popularly known for his quick judgments and profound legal scholarship would, for sure, do something historic in this direction by effecting long-awaited judicial reforms.

Professional competence and integrity should be the only basis for judicial appointments and extraneous factors like sociopolitical stature should not be taken into account.

Some of the key areas that require exclusive attention of the coming justice are as follows: corruption, appointments based on nepotism and favoritism, unnecessary delay in disposal of the cases and rampant misconduct.

Judiciary like all other institutions of our country is not immune to the epidemic disease of corruption. It has been observed that in subordinate courts especially in the lower judiciary nothing can be achieved unless the palms of the court staff are greased. This malpractice is earning a bad name to the sacred institution of the judiciary and therefore warrants immediate and stringent action.

To this end, in each high court a cell to be called “cell for the eradication of corruption from judiciary” may be established in the office of the registrar, under the supervision of chief justice of the high court to entertain complaints with credible evidence. Copies of such complaints may also be forwarded to the registrar of the supreme court of Pakistan. Actions should also be taken against those judicial officers and the staff who have their lifestyle beyond their ostensible means.

Bar councils should also take the complaints of corruption and professional misconduct against the lawyers seriously. They should purge their noble profession of such corrupt elements who are blackening the name of the bar. Further, it is due to their ill-behavior and gross misconduct that a new term “VUKLA GARDI” has been attributed to this profession of gentlemen. The bar associations must reform themselves to claim their correct place as servants of law rather than acting as obstructionist forces to genuine efforts at reform.

In addition, a bar should also take notice of those lawyers who have remained judges of the superior courts and use prefix/suffix of their previous designations such as Rtd justice, Ex-judge, an ex-attorney journal to attract the clientage. This practice is prohibited under rule 174-A of Pakistan legal practitioner and bar council rules, 1976. In this respect, bar councils are bound to take steps to discontinue this practice.

Inter alia, both the bar and the bench should follow the prescribed code of conduct religiously. The judges are required under article x of the code of conduct to take all steps necessary to decide the cases within short possible time.

Another area that requires serious reformatory action is judicial appointments. Currently, the system of induction in our judicial dispensation is plagued by nepotism and cronyism. To discourage this practice, the principle of meritocracy should always be upheld under all circumstances. Professional competence and integrity should be the only basis for judicial appointments and extraneous factors like sociopolitical stature should not be taken into account. In this regard, the committee for the selection of judicial officers should be carefully constituted from among the honest, strong-willed judicial officers to withstand the pressures whatsoever and whatever manner coming from outside.

Further, appointments in the attorney –general office and the advocate general’s office may be made on merit rather than sole discretion of the president and governor of each province. In this regard, Article 100 and article 140 of the constitution which provide for such appointments may be amended. If these offices are filled with political appointees, the dream of good governance would remain as elusive as ever.

Apart, there is a huge backlog of cases in the Supreme Court, high courts and district courts. As per latest statics of law and justice commission of Pakistan, there are 38,539 cases pending with SC, 2, 93947 with the five high courts and 18,69886 cases with the subordinate judiciary of the four provinces and the federal capital. This colossal pendency results in an unnecessary delay in the disposal of cases and thereby countenances the famous maxim “justice delayed is justice denied”. In most civil and revenue matters, the litigants have to wait for decades –sometimes the third generation of petitioners get the final verdict in their cases.

Therefore, to clear the backlog under different categories, special benches should be constituted at principal seat and branch registries of Supreme Court and high court to decide current and old cases by placing the prioritized one’s on the fast track. Priority should be given to the disposal of trade, commerce, and investment cases. Such cases should be managed on the fast track through the establishment of designated courts and by constituting special braches by High courts and supreme courts.

The article further says that the judges should make every endeavor to minimize sufferings of the litigants by deciding the cases expeditiously through properly written judgments.

Emphasis should also be given on quick disposal of the cases related to women and juvenile offenders and the cases of Narcotics and anti-terrorism. Moreover, the strict action should also be taken against frivolous litigation. The courts should impose compensatory costs u/s 35 –A of the C.P.C. similarly on the patron of High court of Sindh, the other high courts may also amend the relevant rules for incorporation of a provision to impose a cost up to one hundred thousand rupees for false, frivolous and vexatious litigation.

Inter alia, both the bar and the bench should follow the prescribed code of conduct religiously. The judges are required under article x of the code of conduct to take all steps necessary to decide the cases within short possible time. The article further says that the judges should make every endeavor to minimize sufferings of the litigants by deciding the cases expeditiously through properly written judgments. A judge who is unmindful or indifferent towards this aspect of his duty is not faithful to his work, which is a grave fault.

Finally, the parliament should also extend the required cooperation to the judiciary by updating and amending the laws that govern trials to bring them in line with the modern day. Pakistan’s civil and criminal procedure codes are over a century old, while the law of evidence dates from 1984. Further, a concerted and serious dialogue must also take place between the parliament and representatives of the judiciary to enhance the administrative capacity of the courts.

To cap it all, it is incumbent on the coming chief justice Asif Saeed Khosa to do whatsoever is possible in his capacity to reform the country’s judicial system; if he succeeds in doing so, his name would shine for good in the chronicle of judicial history of the country and the people of Pakistan will ever remain indebted to him.

Advocate Abdul Rasool Syed is a lawyer by profession and is based in Quetta, Baluchistan. He also has MBA from IBA Karachi. He is passionate about writing and contributes to various publications including Daily Times and Frontier Post. The views expressed in this article are author’s own and do not necessarily reflect the editorial policy of Global Village Space.

Previous articleMy every step was within constitutional limits, CJP
Next articleBrexit in dates: From leave shock to parliament’s historic vote

19 June 2021
Previous articleMy every step was within constitutional limits, CJP
Next articleBrexit in dates: From leave shock to parliament’s historic vote

China invests up to $25b in Pakistan

Will US Congress punish Syria’s Assad?