Why was the CJP justified to rebuke and admonish a judge in Larkana? 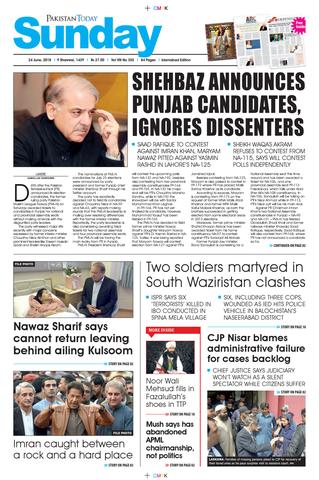 The CJP also asked the judge a few questions regarding the case being heard. The judge, however, failed to respond with satisfactory answers which further irked the CJP. “We cannot compromise on judicial respect,” top judge remarked.

Later on, the video of the CJP in the session court of Larkana went viral on social media, as well as electronic media. People came up with mixed responses. A few disliked the way the CJP rebuked the judge and many stood by the top judge for his agenda to reform the district judiciary.

Amidst all controversy and debates going on social media, the additional district and sessions court judge,  Gul Zameer Solangi resigned from his post for being ‘humiliated’ by the honorable CJP.

Amidst all controversy and debates going on social media, the additional district and sessions court judge,  Gul Zameer Solangi resigned from his post for being ‘humiliated’ by the honorable CJP.

In his resignation letter, judge Solangi wrote that he was posted in Larkana on March 20, 2017. He stated that the chief justice’s “behavior during ‘ongoing court proceedings’ of my court, which was widely aired in the electronic, print and social media”, had caused him anguish.

Read more: Pakistan doesn’t have democracy but ‘worst kind of dictatorship’ under CJP…

He wrote further that, “I have suffered deep anguish and injury to my self-respect and dignity, therefore, I am unable to continue my job with your esteemed organization”.

According to sources the Sindh High Court has not received the resignation of the judge as yet. Legal experts also suggest that according to the protocol, the judge was supposed to submit his resignation to the Session judge who can make the decision on this matter. Moreover, experts also point out that the resignation letter doing rounds on social media is written on a plain paper instead of the official letterhead.

The CJP who was unhappy over the speed of the judge regarding hearing cases made an interesting point. The judge had heard only three cases since the morning and it irked the CJP. The top judge noted; “how can we ensure provision of justice when judicial process is so slow?”

It is important to note that according to the Law and Justice Commission of Pakistan (L&JCP), a total of 1,873,085 cases were pending disposal in all the superior and subordinate courts of Pakistan as on November 30, 2017. As per the statistics compiled by the L&JCP, the Supreme Court has 38,071 cases pending till November 30.

Furthermore, according to the report, the District Judiciary — Sessions Judges, Additional Sessions Judges, senior Civil Judges and Civil Judges — is also faced with an enormous pendency of 1,541,119 cases. Although Khyber Pakhtunkhwa is small in size compared to Sindh, its District Judiciary has more than double undecided cases. The district courts are in a worse of condition with pending cases, Punjab has 1,187,076; Sindh has 99,820;  KP has 204,209; Balochistan has 13,009 cases; Islamabad has 37,005 cases awaiting disposal.

The CJP also asked the judge a few questions regarding the case being heard. The judge, however, failed to respond with satisfactory answers which further irked the CJP. “We cannot compromise on judicial respect,” top judge remarked.

This is a matter of serious concern, and the anger of the CJP over ‘slow speed’ of the judges to hear and decide the cases is justified. When courts do not decide matters in time, it is likely that people lose their trust in the institution, and lawlessness becomes a norm. To ensure the rule of law, it is pivotal to ensure immediate and affordable access to  justice across the country.

Read more: CJP’s intervention for independent PEMRA is a ray of hope for…

It is also important to note that generally district courts and police make the cases complex with bureaucratic red tape, which highlights the malpractices prevailing in the institutions. There are various reports and articles which suggest that the district courts are under the shadow of corruption which needs immediate action and an effective policy. In this context, the efforts of the CJP to make judiciary more vigilant and alert working in the district courts are notable and important to ensure swift and affordable access to justice for every Pakistani citizen.

The behavior of the top judge in the session court of Larkana might not be as per judicial protocol, but his agenda to reform the district courts require public support.

Implementation of Axle Load Limit Regime: When and How?

Why did SC dismiss the review petition of Shahrukh Jatoi?

How feudal lords use jirgas to maintain supremacy