WikiLeaks’ Assange arrested in London on US extradition request 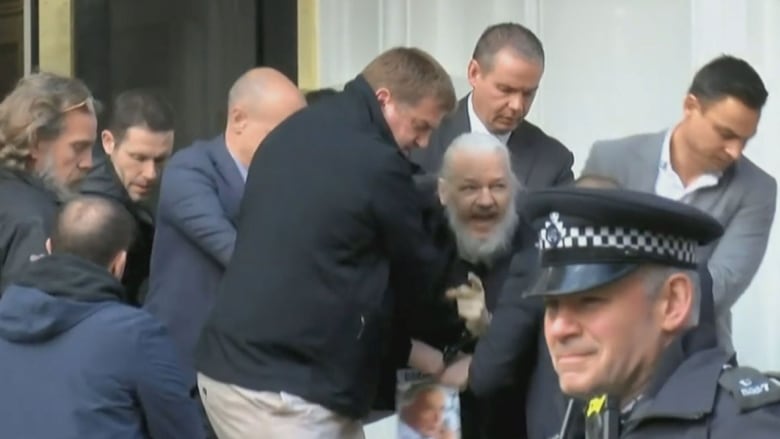 WikiLeaks founder Julian Assange’s seven-year hideout in Ecuador’s London embassy dramatically ended when British police dragged him out and arrested him on a US extradition request.

Footage from the Russian video news agency Ruptly showed Assange his worn face framed by a bushy white beard and shock of silver hair being hustled out of the building by burly men in suits and pulled into a waiting police van Thursday.

The scene unfolded outside the plush central London building that has been Assange’s refuge from the authorities since 2012. “No one is above the law,” British Prime Minister Theresa May said to cheers in parliament.

Assange had long suspected that he was secretly wanted by Washington for his decision to publish a trove of classified Pentagon documents detailing alleged US war crimes in Afghanistan and Iraq.

The drama came after Ecuador under pro-US President Lenin Moreno, increasingly frustrated with Assange’s stay pulled its asylum and cancelled his citizenship after earlier curbing his internet and mobile phone access.

British police said Assange had been initially arrested for breaching his bail conditions in 2012 and then “further arrested on behalf of the United States”, where he is wanted to face hacking charges. His London lawyer Jennifer Robinson said Assange would be “contesting and fighting” his extradition.

Robinson said Assange had also told her to pass a message to his supporters that his repeated warnings about the risk of US extradition had been proved right. “He said: ‘I told you so’,” Robinson told reporters and supporters, including fashion designer Vivienne Westwood, outside Westminster Magistrates Court.

The pony-tailed 47-year-old Australian gave a thumbs-up sign to the press gallery in court and opened up a copy of Gore Vidal’s book “History of the National Security State” about the US military-industrial complex before his hearing began.

Judge Michael Snow pronounced Assange guilty of breaching his bail conditions by sheltering in the embassy and remanded him in custody to face sentencing at an unspecified later date. He faces up to a year in a British prison and will have his separate extradition case heard on May 2. Assange yelled “this is unlawful” and “I am not leaving” during the arrest, the court was told.

Police struggled to handcuff him but eventually lifted him out exactly an hour after entering the embassy. Assange had long suspected that he was secretly wanted by Washington for his decision to publish a trove of classified Pentagon documents detailing alleged US war crimes in Afghanistan and Iraq.

The Reporters Without Borders free speech group said Assange’s arrest “could set a dangerous precedent for journalists, whistleblowers, and other journalistic sources that the US may wish to pursue in the future”.

US authorities had steadfastly refused to confirm reports that they had issued a sealed indictment against Assange until Thursday. The US Justice Department said Assange was being charged with a computer hacking conspiracy relating to his work with former US intelligence analyst Chelsea Manning in March 2010 and faced a maximum of five years in prison if convicted.

US President Donald Trump brushed aside the issue when questioned by reporters at the White House. “I know nothing about WikiLeaks, it’s not my thing.”

Assange will now be at the heart of a legal and diplomatic tug of war pitting him and his legions of supporters including Russian authorities against the US justice system. His links to Russia continued through the years holed up in the Ecuadoran embassy.

A collaborator close to Assange was arrested in Ecuador on Thursday, Interior Minister Maria Paula Romo said after she earlier linked the individual with alleged attempts to destabilize Moreno’s government.

US intelligence agencies believe the hack was conducted by Russia’s military intelligence agency. Assange says he never knew the source of the politically-compromising material when he released it on WikiLeaks.

Assange’s supporters fear that his extradition will be followed by more serious US charges such as treason a crime that carries the death penalty in wartime. Moreno insisted that he had “asked Great Britain for the guarantee that Mr. Assange will not be extradited to any country in which he could suffer torture or face the death penalty”.

Assange’s case has opened up a bigger debate about security and free speech. His supporters view him as a fearless exposer of injustices such as torture and alleged war crimes committed by US forces and then covered up. Assange’s critics accuse him of cosying up to authoritarian leaders such as Russian President Vladimir Putin and putting US lives at risk.

The Reporters Without Borders free speech group said Assange’s arrest “could set a dangerous precedent for journalists, whistleblowers, and other journalistic sources that the US may wish to pursue in the future”.

Russian foreign ministry spokeswoman Maria Zakharova accused Britain of “strangling freedom” and fugitive US whistleblower Edward Snowden himself hiding in Moscow since 2013 said the arrest was a “dark moment”. Former Ecuadoran president Rafael Correa claimed it was an act of “personal vengeance” on the part of his successor Moreno.

A collaborator close to Assange was arrested in Ecuador on Thursday, Interior Minister Maria Paula Romo said after she earlier linked the individual with alleged attempts to destabilize Moreno’s government.