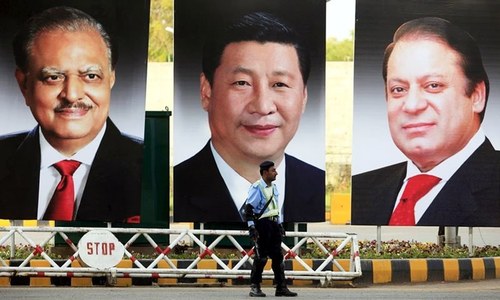 China has been negotiating with Baloch militants for above five years to secure its $60 billion investment in the infrastructure development project China Pakistan Economic Corridor. It has been in direct contact with those Baloch militants where most of the CPEC-related schemes are placed. One Pakistani official told the Financial Times, London, “The Chinese have quietly made a lot of progress.

Even though separatists occasionally try to carry out the odd attack, they are not making a forceful push.” Pakistani officials have welcomed talks between China and militants. “Ultimately, if there’s peace in Baluchistan, that will benefit both of us,” one official in Islamabad elaborated.

China has maintained a policy of non-interference in the domestic politics of other countries for more than half a century. But that policy has been tested by its desire to protect its huge investment in its One Belt One Road initiative in which more than 65 countries are involved.

When internal challenges such as insurgency in Baluchistan and Uyghurs’ separatist movement in the Xinjiang region in China are addressed, it would be easy for both China and Pakistan to confront external security challenges coming from India and the US.

China’s Belt & Road initiative has brought China into the world’s most complex conflict zones. China’s peacekeepers are also in negotiating process with South Sudan where the former has invested in oilfields and planned to build a rail line. China has also sent its troops in Mali and talked about launching attacks against Islamic State group in Iraq as it is the largest foreign investor in Iraq’s oil sector.

China seems keen to fill the loopholes left by Washington to tackle extremism in Pakistan. There was a debate that China’s investment could lead Pakistan to be treated like a client state by Beijing, despite China’s promises not to station its troops there. After the suspension of a security assistant by the US, many Pakistani people were convinced that China was a more genuine partner to help and support Pakistan.

China’s ambassador to Islamabad recently revealed in an interview to BBC that militants in Baluchistan were no longer a threat to the economic corridor. One of the provincial tribal leaders said that many young people have laid down their weapons by the promises of financial benefits. He added, “Today, young men are not getting attracted to joining the insurgents as they did some 10 years ago. Many people see prosperity as a result of CPEC.”

CPEC a flagship project of OBOR, has many dimensions including local, political, strategic, security and economic. Security is a prerequisite to complete this this huge development project. Pakistan’s government has taken various steps to secure routes along CPEC and to secure Chinese workers too.

China’s efforts to negotiate with Baloch militants demonstrates positive signs for the uninterrupted progress of the projects. There are some internal as well as external challenges in the way of progress of this project.

The Parliamentary Committee on China Pakistan Economic Corridor (CPEC) informed in 2016 that a Special Security Division (SSD) comprising of 9,000 Pakistan Army soldiers and 6,000 Para-military forces personnel have been set up for the security of the project and individuals working on CPEC. Additional Security challenges also come from the fact that CPEC runs through Gilgit-Baltistan which India claims is a disputed territory.

Although the Karokoram highway was built in the same area in the 1980’s and India has built dams and roads in contested areas, without regard to Pakistani or Chinese claims over the territory. China and Pakistan’s efforts to protect CPEC routes will lead those areas (where insurgency was common) to development, peace and prosperity.

China’s efforts to negotiate with Baloch militants demonstrates positive signs for the uninterrupted progress of the projects. There are some internal as well as external challenges in the way of progress of this project. When internal challenges such as insurgency in Baluchistan and Uyghurs’ separatist movement in the Xinjiang region in China are addressed, it would be easy for both China and Pakistan to confront external security challenges coming from India and the US.

China may send ducks to Pakistan to tackle locust attack

US & China decide to cooperate over virus epidemic