Will Former Military Dictator Pervez Musharraf Be Convicted in Absentia?

A special court has reserved its verdict after Pervez Musharraf failed to appear before the bench. There is a strong perception that former military dictator will be convicted by the court for perverting the constitution and imposing emergency back in 2007. 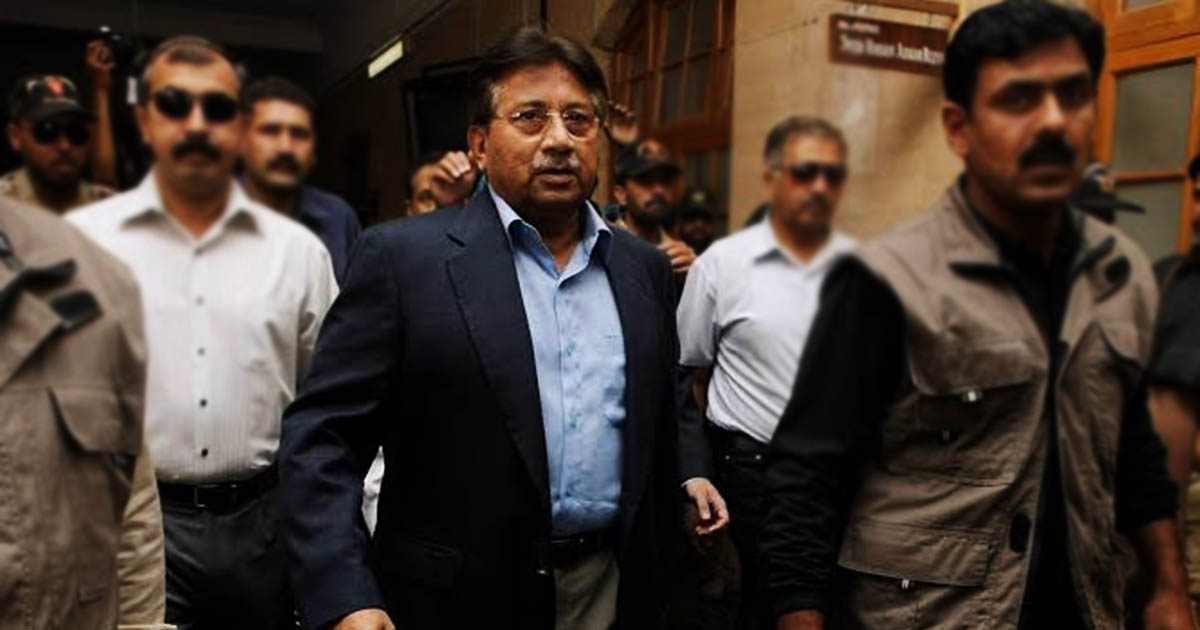 A special court in Islamabad on Tuesday reserved its verdict in a high treason case against former president Pervez Musharraf for abrogating and subverting the constitution by proclaiming emergency in Nov 2007. Analysts believe that the decision is likely to have political benefits for the former military dictator. Musharraf’s refusal to face the court on health grounds shall help his claim of being convicted without being heard by the courts.

According to details, a three-member bench led by Peshawar High Court Chief Justice Waqar Ahmad Seth resumed the hearing, the court was told that the former president’s lawyer was absent on account of Umrah.

Following this, Justice Seth said that the former president’s lawyer had been given a third chance to submit his arguments, but still he chose to skip the court.

However, the court took a short break and later announced that a verdict in the case has been reserved and will be announced on Tuesday, Nov 26. Additionally, the court said that Musharraf’s counsel could submit written arguments by Nov 26.

Musharraf is being trialed for imposing emergency in 2007 and detaining the judges of the Supreme Court of Pakistan. A case was registered against him in 2013 and his name was placed in the Exit Control List (ECL) by the Federal Investigation Agency (FIA) on the directives of the Sindh High Court (SHC). Later on, the Supreme Court of Pakistan allowed Musharraf to go abroad for his medical check-up and his name was removed from the ECL.

Moreover, the special court has declared Mr. Musharraf an absconder, issued perpetual warrants of his arrest and commenced proceedings under Section 87, 88 CrPC for attachment of his properties on July 19, 2016. On April 29, 2018, an application was filed by the federal government to give verdict on high treason case against Musharraf as early as possible.

The application titled “Federal Government of Pakistan versus retired General Pervez Musharraf” read “The turn of events have unfolded and he [Musharraf] has categorically made statement to the media abroad that he left the country with the help of his institution thereby casting aspersions on our armed forces and its then chief retired Gen Raheel Sharif.”

Read more: Musharraf to be tried in absentia in treason case: Special Court

It further mentioned that “it is a matter of common knowledge that shortly after leaving Pakistan he was seen on videos shared on social media sites where he is swaying to the beats of the music in wedding festivities and during his three months preferred stay in Armed Forces Institute of Cardiology (AFIC) he did not receive a single tablet of aspirin or underwent any angiogram test as according to him at that time the angiogram posed a potential threat to his life”.

Analysts believe that the former President shall prefer not to come back and create some serious problems for himself. It is believed that the health condition of Musharraf is not satisfactory which clearly gives him a reason to avoid court proceedings or serve any term in the prison if convicted after he fails to defend himself before the court.

Last time when the former CJP designed a trap for Musharraf and invited him to come back on his on conditions e.g. pre-arrest bail and dignified treatment, analysts suggested Musharraf not to throw himself in troubled waters. Dr. Moeed Pirzada, a prominent Pakistani journalist, said that “Will Gen. Musharraf be “naive” enough to fall in this trap? Hope he has brains enough not to create problems for all sides…and he won’t win from any seats…enjoy retired life..”

Will Gen. Musharraf be "naive" enough to fall in this trap? Hope he has brains enough not to create problems for all sides…and he won't win from any seats…enjoy retired life.. https://t.co/zmm7bpsun8

GVS contacted G-M Pitafi, academic and political commentator, for his comment on the development. “I have always maintained that the former dictator shall not come back. He left the country not to return and face the courts. Musharraf knows his position is very weak and the courts are comparatively independent now, therefore, he would never commit a mistake of surrendering before the present government,” he said.

When asked what will happen if Musharraf does not come back, Mr. Pitafi said “nothing is going to happen. The world shall remain the same. The court may give a verdict against Musharraf which shall always remain controversial since the former dictator’s followers would have some excuses to politically challenge and disregard the decision given in the absence of their leader”.