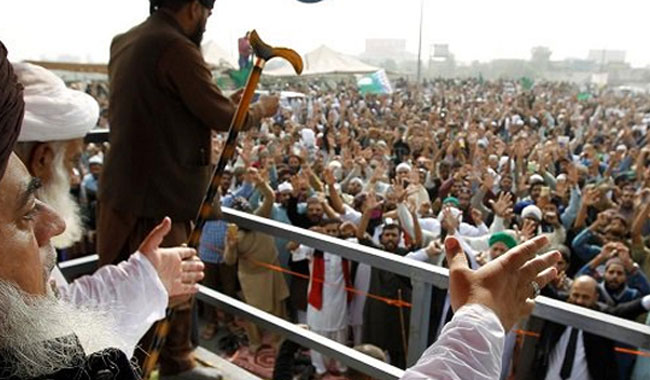 A group of ministers on Tuesday hinted at conducting an operation in case authorities failed to reach a peaceful agreement with protesters holding a sit-in at Faizabad interchange, the main junction between the twin cities. This comes in the wake of the conspicuous absence of State Minister for Religious Affairs Pir Muhammad Amin Ul Hasnat who belongs to the same background as the protestors.

Scores of supporters of the newly launched religious political party Tehreek-e-Labbaik-Ya-Rasulallah (TLYR), many armed with sticks and iron rods, have blocked the main entrance to Islamabad since last week, demanding the resignation of the country’s law minister and a strict adherence to blasphemy laws.

The implications for the Barelvi community are far more alarming. For decades, Barelvis boasted that they were free of violent extremism, which was the domain of the “Wahabis”.

Led by Khadim Hussain Rizvi, at least 3,000 protesters were staging a sit-in on one of the main highways leading to the capital. The TYLR sit-in called the “Tajdar-e-Khatam-e-Nubawat Dharna” started as a rally in Lahore, which made its way to the Faizabad Interchange, the main junction between Islamabad and Rawalpindi last week.

The organizers insist that their goal is not political but religious. Therefore the sit-in is being carried out by the TLYR and not the Tehreek-e-Labaik Pakistan party (which is the political wing of the TLYR). Pir Muhammad Amin Ul Hasnat has the same ‘Barelvi’ background and leadership as the majority of the protesters at the sit-in. He was being considered as a bridge between the government and the protesters.

Read more: Faizabad Dharna: A view of both sides

Sources assert that the state minister was available in Islamabad but he intentionally avoided appearing in the press conference against a religious party belonging to his own sect. Pir Hasnat has already raised controversy due to his support to the murderer of Salman Taseer, Mumtaz Qadri. He has on record called the executed murderer a “Martyr”. It is Mumtaz Qadri’s name which the TLYR espouses since its beginning.

The acts of Hasnat and the TLYR carry meaning for both the government and the Barelvi school of thought.  The PML-N has long been suspected of playing a double game with the Qadri issue.

The TLYR itself has been known for controversy within the Barelvi school of thought. The last failed sit-in at D-Chowk gained prominence for attacks by the organizers on “non-political” Barelvi leaders. Pir Muhammad Afzal Qadri, who is the guardian of the latest sit-in, blasted those Barelvi political leaders who claimed to be nonpolitical as having their “faith in doubt.” Many took this attack to be on the nonpolitical organization Dawat-e-Islami. In return, Afzal Qadri was blasted by Mufti Hanif Qureshi who is alleged to be the ideological mentor of Mumtaz Qadri.

The acts of Hasnat and the TLYR carry meaning for both the government and the Barelvi school of thought.  The PML-N has long been suspected of playing a double game with the Qadri issue. On one hand, it portrays itself as a “liberal” force to both the West and its liberal constituents while on the other hand, it portrays itself as an Islamist party to its conservative vote bank. Pir Hasnat and Nawaz’s son-in-law Captain (r) Safdar are mainly the conservative faces of the party.

The implications for the Barelvi community are far more alarming. For decades, Barelvis boasted that they were free of violent extremism, which was the domain of the “Wahabis”. Yet the subsequent rise of violent sectarian outfits in the form of Sunni Tehreek, TLYR, and the TTIP show that extremism is not limited to the “usual suspects”.