Will judicial activism enable JIT to get accountability? 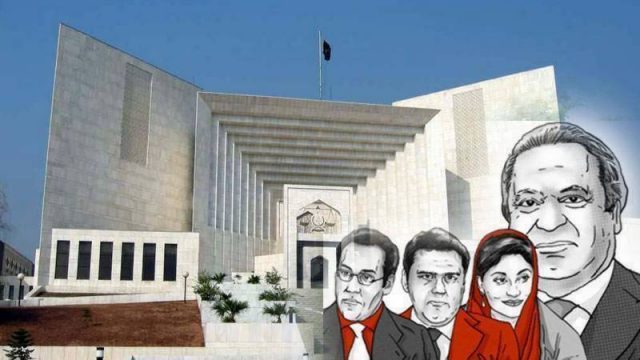 The Supreme Court’s (SC) seriousness of purpose in the PanamaGate case was evident from the brusque manner it dismissed Hussain Nawaz’s apprehensions of “personal bias” regarding two members of the JIT. The SC’s inference was clear, the PM and his family should come clean about the money trail or face the consequences. The Sharifs responded as usual through their proxies to maintain deniability. Because of “First Son” Hussain Nawaz’s interrogation by the JIT, Nehal Hashmi went overboard threatening those conducting accountability with a dire vengeance.

Given the storming and ransacking of the SC by a PML (N) Mob in 1998, this was taken very seriously. Nehal Hashmi was summoned to appear before the SC. Though Hashmi’s party membership was immediately suspended by the PM and he immediately resigned as a Senator, attacks by proxies are very much a “Sharif thing”. They are skating on very thin ice here.

One believes the COAS did obtain some not-so-public cast-iron guarantees, coincidence that no provocative tweets have since originated from our “de-facto PM” Mariam Nawaz.

The civil-military divide on the DawnLeaks issue was bridged, albeit after the “paper removal” of Pervaiz Rasheed, Tariq Fatemi, and Rao Tehseen Ali but with virtually no change in the “notification” that was the reason for the Army’s grief in the first place. Being pragmatic in the greater national interest instead of reacting, the Army (and Gen Bajwa personally) took a hit on their credibility by giving the PM this face-saving “reconciliation”.

The govt’s contempt for such niceties was immediately on display by deliberately taking Tariq Fatemi along in the PM-led govt delegation to China. One believes the COAS did obtain some not-so-public cast-iron guarantees, coincidence that no provocative tweets have since originated from our “de-facto PM” Mariam Nawaz. Unless she controls her natural “anti-khaki urges”, any further targeting the Army will have grave consequences for Mian Nawaz Sharif from its simmering rank and file!

To quote Dr. Bettina Robotka of Humboldt University, Berlin, Germany, “I was surprised that the Army caved in. The damage done to the few honest people within the system punished for their being honest cannot be exaggerated. We should finally drop the fiction of democracy at least according to the western model. It doesn’t work even over there anymore! And a feudally minded society as the Pakistani is unable to maintain the basic idea of democracy – equality in front of the law and equal opportunities for everybody, only a mutilated democracy is possible.”

How to tackle corruption?

The decline in the political order, deteriorating economic conditions and expanding underground economies have created conditions for profitable activity outside the legal framework in Pakistan.

The World Economic Forum (WEF)’s Partnership Against Corruption Initiative (PACI) Seminar in London on May 24, 2017, noted, “lack of enforcement of the legal and regulating framework for addressing corruption is often cited as a major impediment to promoting real change, especially in the business environment.” The mechanism for prevention measures include greater transparency in contracts between the public and private sector, improving documentation (making it increasingly e-based), improving the quality of oversight and having an honest and dedicated leadership.

While eradicating corruption altogether may be a pipedream, containment is possible if the rules are equally applicable to everyone regardless of their connections. Selective accountability tends to compromise the entire process. At a very successful “Horasis Global Meeting” organized May 27-30 by my good friend Dr. Frank Jurgen-Richter in Cascais, Lisbon, a panel chaired by Brook Horowitz for “Defeating Corruption” synthesized some “big ideas” about fighting this curse effectively.

The decline in the political order, deteriorating economic conditions and expanding underground economies have created conditions for profitable activity outside the legal framework in Pakistan. The symbiotic relationship between organized crime and terrorism results from ineffective and/or corrupt governance. Well infiltrated by organized crime, our domestic politics has been taken over in some places by criminals. Access to vast financial resources and running a parallel black economy makes organized criminal groups an existential threat to the nation. “Extra-constitutional activism” by the Pakistan Army forced successive governments into approving their suo-moto actions against terrorists. Accountability must target accessories and willing collaborators actively facilitating the loot.

At the highest reaches of govt and society, any individual using his office for material gain is a crook, pure and simple.  The JIT’s inquiry into the PanamaGate case has shown that outright lies are the order of the day. The Oxford Dictionary defines perjury as “an act of willfully telling an untruth when on oath”. Most problems can be traced to the willingness of those under oath for false representation of facts and distortions, to tell lies with impunity, forge documents, and erase, alter, deface, mutilate, etc evidence as may be required. A perjurer is a criminal.

Thanks to the convoluted logic that “Pakistan first” Musharraf used in framing the infamous National Reconciliation Order (NRO) for his survival in power, it effectively institutionalized corruption during the decade.

Quoting my article “The Missing Panama Files” of Nov 18, 2016, about the tools for obtaining and verifying forensic evidence, “An excellent forensic IT software produced by Australia’s Nuix Pty Limited can sort through all manner of jumbled data, logging unsearchable PDFs, pictures, and scanned documents. Nuix’s processing and investigation technology enabled ICIJ’s network of journalists to sift through the millions of leaked documents and cross-reference Mossack Fonseca’s clients.”

Angela Bunting, VP of Nuix, told reporters, “What we’ve done is enabled the ICIJ to do what they couldn’t do in probably months or years.” The paucity of time for the JIT makes use of technology crucial. Nuix sells its wares in 65 countries to an elite list of clientele including the United Nations, the United States Secret Service and many law enforcement agencies in the world. Licensed by Nuix, the State’s enforcing institutions can easily target fraud, crime, money-laundering, evading taxes in the fight against corruption, organized crime and their nexus with terrorism, etc in Pakistan.

Thanks to the convoluted logic that “Pakistan first” Musharraf used in framing the infamous National Reconciliation Order (NRO) for his survival in power, it effectively institutionalized corruption during the decade. And now he pontificates about corruption on TV regularly! Making the black NRO illegal, former CJP Iftikhar Chaudhry conveniently left its beneficiaries in place. The Federal Ombudsman indicting both his son Arsalan and real estate tycoon Malik Riaz for tax evasion could have compromised him. The case being shoved into the dustbin by Zardari as President was probably the quid pro quo for not disqualifying NRO beneficiaries.  That symbolically represented that practically no political, administrative and/or judicial will exists through the broad spectrum of governance to combat corruption.  The mostly silent majority “holier-than-thou” in Parliament aid and abet corruption by giving the criminals in the ranks of the political parties “democratic” cover.

The superior judiciary seems determined not to allow criminals to use the state apparatus for governance in the name of justice for their own ends. Without judicial activism, accountability will become a figment of imagination and justice will become a crime!