Will Madhuri replace Sri Devi in Karan Johar’s next film? 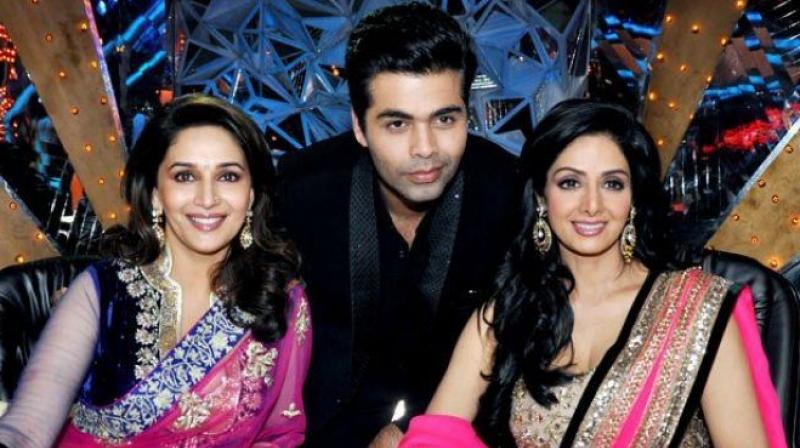 The movie is titled ‘Shiddat’ under the Dharma Productions. The movie is set in times of partition. It has in its casts Aditya Roy Kapoor, Sonakshi Sinha, Sanjay Dutt, Varun Dawan and Alia Bhatt. The movie is set to be a period drama set in the 1940s, with partition serving as the backdrop and Manish Malhotra is designing the look of the entire cast.

“Abhishek Varman’s next film was very close to mom’s heart …Dad, Khushi and I are thankful to Madhuriji for now being a part of this beautiful film…” Jahnvi wrote on Instagram.

She posted a picture of the two actresses from the sets of a dance reality show.

The film is being made by Dharma Productions in collaboration with Fox Star Studios and Sajid Nadiadwala. The film is expected to start rolling from early next year. Shiddat is written by Gulab Gulati and directed by Abhishek Varman.

Sri Devi and Sanjay Dutt were expected to play the parents of couple Varun Dhawan and Alia Bhatt in the movie.

Read more: The next Oscar goes to ‘Friend’s request’

Though Karan Johar confirmed that they have signed Madhuri Dixit for Dharma Productions but the movie is not ‘Shiddat’. Karan Johar in his tweet said there was a confusion and that Madhuri is not replacing Sri Devi however, Karan Johar did not inform about Sri Devi’s replacement in ‘Shiddat’.

The confusion still persists despite Karan Johar’s tweet as fans are seeking if Madhuri Dixit has taken up the role of Sri Devi. Fans and followers now await the response from Madhuri Dixit for further clarification.