Will Mehwish Hayat play Benazir Bhutto in next project? 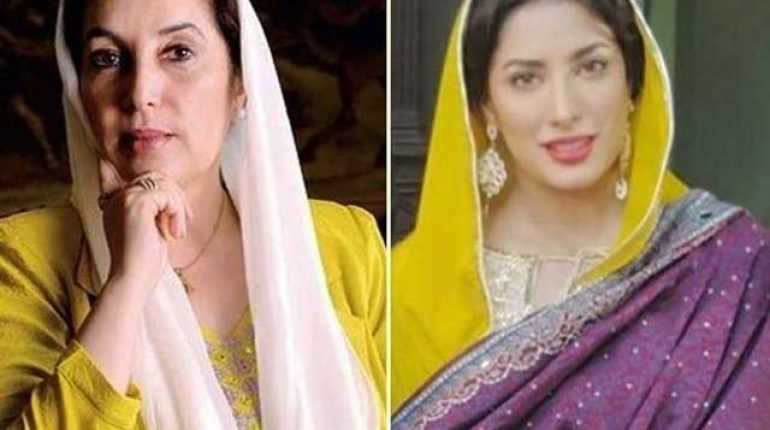 According to the recent reports rife on social media, ‘Punjab Nahi Jaungi’ starlet Mehwish Hayat is most likely to play slain leader Mohtarma Benazir Bhutto in a biopic.

@somethinghauteofficial made me smile this morning. Benazir is a true hero of mine, a real powerful woman and a inspiration for many millions around the world. Would be a privilege and honour to play her on screen and bring her wonderful journey, her inspirational story to the world ! #MehwishHayat #BenazirBhutto #biopic #womanofstrength #Superwoman #myhero

The starlet is said to have a close resemblance with the PPP leader and former Prime Minister of Pakistan Benazir Bhutto.

Many believe she shares the same courage and valour as Benazir Bhutto in fighting against injustice within society. Hayat is known for proactively supporting the cause of women’s rights in Pakistan.

The actor shared a picture on her Instagram post in which she wrote the possibility of playing BB in her upcoming project.

“Benazir is a true hero of mine, a real powerful woman and an inspiration for many millions around the world. Would be a privilege and honor to play her on screen and bring her wonderful journey, her inspirational story to the world!”

However, not much details are known about the project but fans and followers are expecting a powerful performance from Hayat as Benazir Bhutto.

She has already proved her mettle in projects like ‘Actor in Law’, ‘Punjab Nahi Jaungi’, ‘Dil Lagi’ and ‘Jawani Phir Nahi Ani’. Earlier there were reports that Bollywood actress Vidya Balan was approached for the biopic.

Benazir Bhutto, a Pakistani politician, served as Prime Minister of Pakistan from 1988 to 1990 and again from 1993 to 1996. She was assassinated on December 27, 2007, in Pakistan. She was an inspiration to millions in Pakistan and abroad for standing up to tyranny. A movie about her life would be appreciated by all audiences regardless of political affinities.