Will Nawaz be able to save his sinking ship through “Mujhe Kyun Nikala” rhetoric? 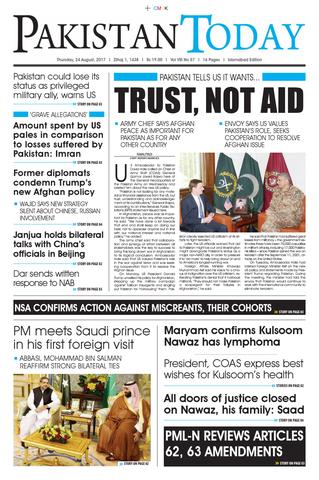 Ousted ex-Prime Minister Nawaz Sharif is holding a public rally in College ground- Abbottabad today.Nawaz’s address is expected to begin at 3 pm.  The organizers of the Jalsa have claimed that huge turn out is expected and that people from across the country will participate.

Earlier, Nawaz Sharif reached Benazir International airport, Islamabad, where he conducted brief talks on the current political climate of the country with Pashtoon Khawa Milli Awami Party leader Mehmood Khan Achakzai. After the brief encounter with Achakzai, Nawaz left for Murree, from where he reached Abbottabad.

The local police had shown concerns about the quality of the security arrangements in the ground. Police had declared the stage/podium unsafe for the Jalsa and had informed the local and central leadership about its quality, when the PML-N leaders Pervaiz Rashid, Amir Maqam, Mehtaab Abbasi and Asif Kirmani visited the venue to review the preparations for the gathering. While, speaking to the media present at the venue, ex-information minister Pervaiz Rashid challenged Imran Khan and said that PTI chairman is scared of Nawaz Sharif and that is why he is making calls for snap elections. He praised Nawaz and added that “Nawaz Sharif is Pakistan’s asset”.

Historically, Nawaz enjoys a great support in the area and analysts have argued that this is the right place to begin a campaign to counter the pressure exerted by the prosecution in Panama Paper cases in the accountability court. Nawaz is hoping to reach out to the public.  This rally is part of the Nawaz’s public mobilization campaign which is an attempt to cash on people’s sentiments.

House of Nawaz is under tremendous pressure as NAB continues to gather more and more evidence against the beleaguered family. After virtually exhausting all the options, Nawaz is seeking support from masses. Other than Nawaz, Maryam, and Capt. Safdar, other accused Hassan, and Hussein failed to appear in any of the court hearings and were declared absconders.  NAB chairman, Justice Javed Iqbal has proceeded in this regard and wrote to the interior ministry to put Hassan and Hussain on ECL.  Legal and Political analysts believe that after this, NAB will seek the cancellation of their passports. Nawaz is unable to gather momentum thus far to change the course of events in his favor. The only credible option on the table was to go to the public.

Post GT road rally, ex-PM will be launching his first mass contact campaign to actually engage with the public since the disqualification. Nawaz is aware of the political gains PTI is making after launching election campaign earlier this month, where Imran traveled across Punjab. PTI is trying to create a momentum for next elections and Nawaz is now trying to counter Imran’s ascendance by more likely playing a victim card.

Nawaz Sharif wants to dilute the effect of Panama judgment. Whether he will succeed, only time will tell.

Pakistan thanks Erdogan for his support on Kashmir