Will Nawaz’s ‘Positive’ meeting with Saudi-Royals bear any fruit? 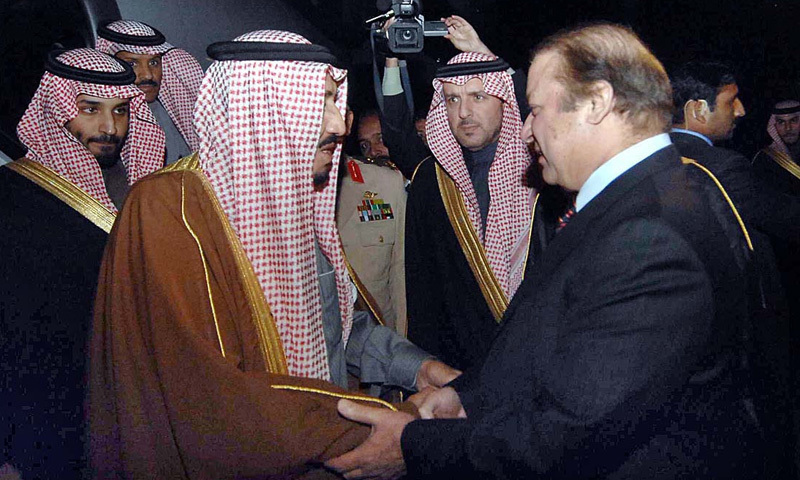 Ousted and indicted ex-Prime Minister Nawaz Sharif held a meeting with the influential and prominent personalities of the Royal family in Kingdom of Saudi Arabia (KSA) on Wednesday. PML-N’s local leadership has hailed the meeting as ‘positive’. Nawaz Sharif has apparently extended his stay in the KSA.

According to the media reports and PML-N sources, Nawaz Sharif is hoping to rekindle the magical relationship of past and gather backing from the all-important house of Saud.

Mian Nawaz Sharif was due in court today, and it was expected that Nawaz would arrive in Islamabad on a Pakistan International Airlines (PIA) flight PK-742. However, he landed in Jeddah, where he performed Umrah with his mother.

The extended visit to KSA may also points to his attempts to put pressure on the authorities to delay or evict him of corruption charges.

There is a buzz among the gossip mill in Islamabad that Nawaz Sharif has put a settlement proposal in front of key members of the Royal family to broker a deal with the establishment in Pakistan. According to this settlement, Nawaz will reduce his role in politics and he will be replaced by his able brother Shahbaz Sharif. Since younger Sharif enjoys a goods reputation among PML-N voters in the strong-hold of Punjab, therefore, it can be used as potent weaponry in coming general elections.

Three times Prime Minister facing the battle of epic proportions was charged in absentia first on 19th October along with his daughter Maryam Nawaz and son in law, Capt. Safdar in the London properties reference.  Secondly, the Accountability Court Judge Mohammad Bashir had charged Sharif in Al-Azizia Company, and the Avenfield Properties references through his pleader.

On the very next day, on 20th October, he was indicted in his third reference related to Flagship Investments and other off-shore companies. This time again, in his absence, he was charged through his pleader-Zafir Khan.

Nawaz failed to appear in the Court today, and the judge wrapping up the hearing in the Avenfield flats reference, adjourned the court until 3rd November.

Nawaz had objected that trial of the house of Sharif being conditioned to be completed under the supervision of a monitoring judge- Justice Ijazul Ahsan is against the constitutional provisions. He believes that he & his family have been denied the right to fair and transparent court proceedings.

Nawaz Sharif continuously argued during his tenure as a Prime Minister and post-ousting that he is ready to face all kinds of accountability as he is clean and has nothing to hide. But, rather than facing the charges put up against him, Nawaz has allegedly been looking to exploit the sources internally and externally.

Read more: Has Imran Khan kicked-off his campaign against…

Since Nawaz failed to appear in the Court today, the judge wrapping up the hearing in the Avenfield flats reference, adjourned the court until 3rd November. However, the accountability court issued bailable arrest warrants for the missing ex-PM on two other references, the Al-Azizia Steel Mills and Hill Metal Establishment reference and the Flagship Investment reference.

Thousands of Men to Be Pardoned for Gay Sex, Once a Crime in Britain