Will South Punjab be a Province? 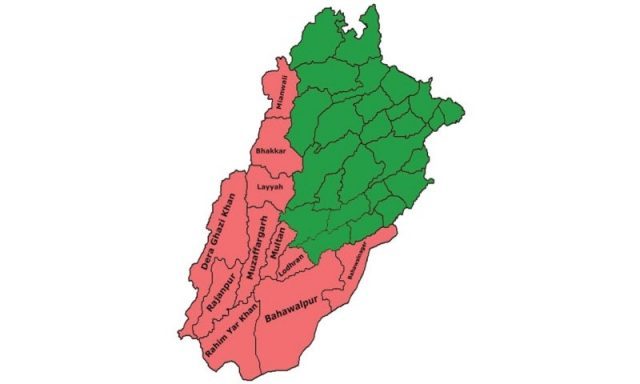 A great political upheaval has been witnessed in South Punjab during last month when some lawmakers of PMLN elected from South Punjab ditched it in a dramatic manner on the ground of grievances and backwardness of their area. These lawmakers announced that from now onward, they will contest for a separate province under the umbrella of their own party “South Punjab Soba Mahaz”.

But before this nascent party could be registered by the ECP, they merged themselves into PTI and in a written agreement reiterated its 29th April 2018 Lahore stance that they will take concrete steps for the establishment of South Punjab upon the recommendation of a committee headed by Chairman SPSM.

Two major national political parties PPPP and PTI in their public rallies are favouring a new province in Punjab which will be consist of three division namely; Multan, Bahawalpur and Dera Ghazi Khan on administrative basis but various Seraiki parties are demanding a separate province on the ethnolinguistic basis. The map of Seraikistan proposed by Seraiki parties consists of 21 Districts of Punjab. Besides this three division, they intend to include Seraiki belt of KPK Province namely Dera Ismail Khan and Tank Districts and also Sahiwal Division and some districts of Sargodha and Faisal Abad Division as well.

The Seraiki movement faces several challenges in the formation of a greater province Seraikistan on the issue of identity and majority. The first challenge they face is the changed ethnolinguistic demography of this area. Although South Punjab is a Seraiki majority area in its various districts like Khanewal, Vehari and Bahawalnagar, Punjabis outnumber Seraikis.  Moreover, in Lodhran, Bahawalpur, Multan, Rahim Yar Khan and Layyah Non-Searaikis are almost one-third of the population.

Muzaffar Garh, Dera Ghazi Khan and Rajan Pur are the only districts where their population is more than three fourth of the total population. Without convincing the non-Seraiki population, the movement for ethnolinguistic province “Seraikistan” will turn futile.

The second challenge faced by Seraiki province movement is another separate province movement that is more historic and non-ethnic is the restoration of Bahawalpur province movement. Because before merger into the one unit Bahawalpur division has its own separate legislative assembly which functioned like other assemblies of Pakistan and it also enjoyed the status of a separate state with its own currency, bank and army before partition. Punjab Assembly has also approved a unanimous resolution in its last tenure which demanded the creation of two new provinces namely South Punjab and restoration of Bahawalpur province.

The third biggest problem for Seraiki movement is that it is unable to recognise itself in the electoral politics. Seraiki parties performance in the last election of 2013 was very dismal. Three Seraiki parties contested the election.  In national constituencies. Pakistan Seraiki Party got 5326 votes, Seraikistan Qumi Ittihad pocketed 1890 votes while Seraiki Soba Movement Pakistan received 1797 votes. Similarly, in provincial assembly seats, these all three parties contesting for a separate Seraiki province were able to get sympathies of only 7913 voters. Due to their poor performance in the electoral process, they are unable to grab the attention of power corridors.

The prime hurdle in the formation of a separate province is the constitution of Pakistan. As Article 239 subsection 4 states:“A bill to amend the Constitution which would have the effect of altering the limits of a province shall not be presented to the President for assent unless it has been passed by the Provincial Assembly of that Province by the votes of not less than two-thirds of its total membership.”

Although, the unanimous resolution has already passed for the creation of two new provinces in Punjab on 9th May 2012. But still, no headway has been made because other parties want a single separate province instead of bifurcating South Punjab into two.

Although Seariki movement has already recognised themselves as a separate linguistic and ethnic identity in CNIC and Census column. Now they want to materialize their identity in the shape of a separate province. They believe that their poverty and backwardness will alleviate the formation of a separate province. But their demand of a larger Seraikistan does not seem plausible and feasible and it will not be acceptable to other ethnic diversities. The poverty and backwardness can be lessened by progress, not by bigger or smaller units. Progress can be ensured by education and industries. South Punjab is lacking both.

Qaiser Sajjad is a lecturer at Govt. Degree College Lodhran. He is also a visiting fellow at English Department, Islamia University Bahawalpur, can be followed on facebook @wr.qaiser. He writes on diverse national and international issues.

What would count as valid or invalid vote: clarified by ECP