Will the DAWN leaks Commission report find the actual ‘Leak’ ? 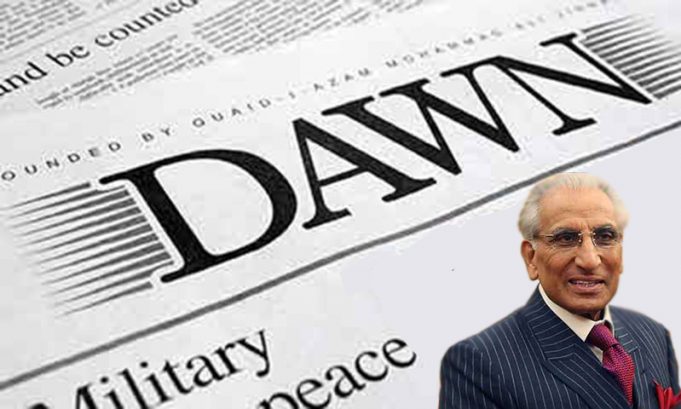 The interior ministry has confirmed that the Dawn Leaks inquiry report would be officially submitted on Wednesday, to Prime Minister Nawaz Sharif and then upon his go-ahead will be made public. It is being reported that the inquiry report revealed that the investigation body did not find any ‘solid proofs’ against the then Information Minister, Pervez Rasheed, who earlier resigned, for not managing the media and allowing such information to be printed. The report, allegedly, names Mr. Fatemi as one of the individuals responsible for leaking news to the Dawn reporter, Cyril Almeida, along with the Principal Information Officer, Rao Tehsin.

Earlier today in Washington, the Finance minister, Ishaq Dar, said that the government is considering replacing Tariq Fatemi, the Prime Minister’s Special Assistant on Foreign Affairs. “Albeit, the inquiry report did not recommend dismissal or removal but even if he is removed then it should not be assumed a big issue, ” he said this when talking to media in Washington, where he is attending IMF and other donor meetings.

However, on Tuesday, TV news outlets reported that Special Assistant to the Prime Minister on Foreign Affairs (SAPM) Tariq Fatemi, as clearly saying that he would not be resigning and taking the blame for being the ‘leak’ after the Dawn Leaks

However, on Tuesday, TV news outlets reported that Special Assistant to the Prime Minister on Foreign Affairs (SAPM) Tariq Fatemi, as clearly saying that he would not be resigning and taking the blame for being the ‘leak’ after the Dawn Leaks inquiry report was presented to the prime minister. News outlets reported Mr. Fatemi, addressing the allegations, said that he had nothing to do with “Dawn Leaks”.

Sources informed that throughout Tuesday, several meetings took place in the foreign office and he also met with the Prime Minister, in which it was assumed that Tariq Fatemi would be asked to resign. For the last several days, media outlets have been reporting the leaked contents of the report; and the fact that the committee investigating the scandal had recommended Mr. Fatemi’s and Rao Tehseen’s removal. This speculation was denounced a couple of days ago by the Foreign Office which had released a statement defending Mr. Fatemi and called these reports “malicious propaganda”.

The Dawn leaks affair as it has come to be known is related to a government meeting held with the military leadership in the aftermath of Indian ‘alleged’ surgical strikes conducted in Pakistan on 28th September 2016.

It was declared by DG ISPR, Maj. General, Asim Bajwa, at the time, as being a breach of national security.

Then a meeting was held in the Prime Minister’s office on 3rd October, which later became the subject of “Dawn Leaks”. Information was leaked to the reporter Cyril Almeida over the ‘alleged contents’ of the meeting, which according to the article later published in Dawn was that the civilian government gave the military establishment a strongly worded warning and implicated the intelligence establishment of aiding certain terrorist groups. Those present in this meeting included the PM, his brother Shahbaz Sharif, DG ISI and other functionaries.

After publication of the article an uproar occurred over the nature of the leaked information and its veracity. It was declared by DG ISPR, Maj. General, Asim Bajwa, at the time, as being a breach of national security.

After pressure from the public and military in November 2016, the government set up a four-member commission headed by former Lahore High Court Judge Amir Raza with a representative of the Inter Services Intelligence (ISI), the Intelligence Bureau (IB) and the Military Intelligence (MI) to look into the matter of who was the person who leaked the information. Other members also included the Establishment Secretary, Tahir Shahbaz, Punjab’s Ombudsman, Najam Saeed and the Federal Investigation Agency Director, Usman Anwar.

However, the two civil servants that are implicated so far are those who Cyril and his Editor called to confirm the original story and are not the actual ‘leak.’

This is the report that is now under discussion, that apparently has found or is ‘scapegoating’ two civil servants as being solely responsible for the leaks. Speculations have existed over the role played in this affair by Maryam Nawaz Sharif, the Prime Minister’s daughter, but she has not been mentioned in the report. However, the two civil servants that are implicated so far are those who Cyril and his Editor called to confirm the original story and are not the actual ‘leak.’ The true identity of Mr. Almeida’s original source is yet unknown.

If after months of inquiry the commission has failed to reveal and indict the true leaker, who had “compromised national security”, despite the involvement of ISI and MI in the committee what hope can the public have from the Panama JIT, where once again representatives from the ISI and MI have been included to show the transparency and accountability – effectiveness- of the due process.

If army clsnt get jstc in this case then we live in paradise of idiots tht @ImranKhanPTI will get smthng in #PanamaCase 4 us #DawnLeaks
— Eng.Usman awan (@MUHAwan4) April 26, 2017