Will the rescue of the hostages be the positive turning point between Pak-US relations? 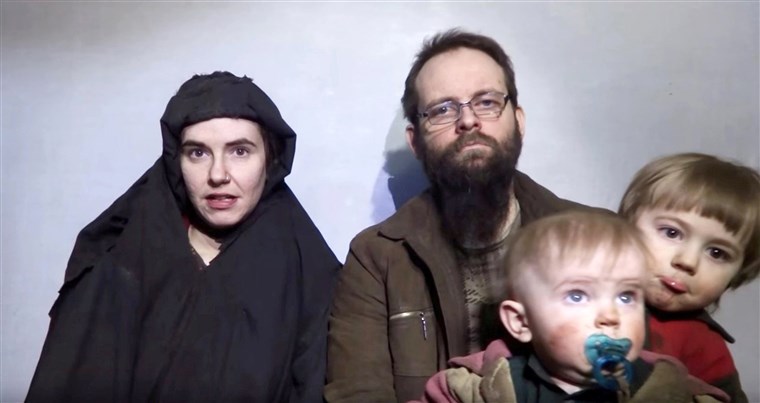 The Pakistan Army rescued a five-member American-Canadian family in an Intelligence-Based Operation (IBO) in the areas adjacent to the frontier region of Kohat. Caitlan Coleman, her three children, and her Canadian husband, Joshua Boyle were freed after a brief yet intense firefight between the Pakistani Army and Taliban captors.

According to the statement released by the Inter-Services Public Relations (ISPR), the Pakistan Army acted on a tip-off by the US intelligence which tracked the transfer of the family to Pakistan on 11th October.

Ahead of impending visits by Secretary of Defense, James Mattis and Secretary of State, Rex Tillerson, this event is being seen as a really positive development. However, analysts also warn again reposing too many hopes from this one-off success-story

“US intelligence agencies had been tracking them and shared their shifting across to Pakistan on 11 Oct 2017 through Kurram Agency border. The operation by Pakistani forces, based on actionable intelligence from US authorities was successful; all hostages were recovered safe and sound and are being repatriated to the country of their origin,” the statement read.

The ordeal of the Coleman-Boyle family started in 2012, when they were abducted by the Haqqani Network, a group the US believes is being supported and protected by Pakistan. According to reports, when the captors were encircled by Pakistan troops, they shouted “kill the hostages” but Pakistani infantry section acted with alacrity and neutralized the captors.

“The vehicle was immobilized with sharp shooting. We destroyed their tires. The hostages remained inside the vehicle. The driver and an accomplice managed to escape to a nearby refugee camp. There is a search operation underway for them right now,” Maj Gen Ghafoor told NBC News.

The quick action brought an end to the suffering of the family; it came at a time when Pak-US ties are on low ebb. It came only days after, the Pakistanis offered the US joint operations against the Haqqani Network, based on actionable intelligence. This successful military operation is seen as an important precedent for providing a framework for future cooperation.

The news of the successful IBO broke out as a US delegation led by Lisa Curtis, deputy assistant to the president and National Security Council senior director for South Asia was meeting the Gen Bajwa and Tehmina Janjua

Pakistani officials have always implored upon the US to share actionable intelligence instead of resorting to mere blame-games. Thursday’s operation was successful partly due to the provision of timely and actionable intelligence, something which sheds light on the usability of cooperation between the two countries. “The success underscores the importance of timely intelligence sharing and Pakistan’s continued commitment towards fighting this menace through cooperation between two forces against a common enemy.

President Trump expressed his gratitude in a statement, “Today they are free. This is a positive moment for our country’s relationship with Pakistan. The Pakistani government’s cooperation is a sign that it is honoring America’s wishes for it to do more to provide security in the region. We hope to see this type of cooperation and teamwork in helping secure the release of remaining hostages and in our future joint counterterrorism operations.”

Trump thanks Pakistan which secured release of Caitlan Coleman, Joshua Boyle, others, says US getting back respect pic.twitter.com/FM9KuLuISm

Patrick and Linda Boyle, the parents of Joshua Boyle, thanked the Pakistani Army and the government for rescuing their son, daughter in law and grandchildren in an emotional video message.

Pundits are of the opinion that the rescue operation could not have come at a better time for Islamabad. The news of the successful IBO broke out as a US delegation led by Lisa Curtis, deputy assistant to the president and National Security Council senior director for South Asia was meeting the Chief of Army Staff (COAS) Gen Bajwa and Foreign Secretary, Tehmina Janjua.

Pulling off a risky operation is seen as a testament to the country’s capability to “do more”. However, Pakistani officials want to stress upon the US to “do more together”. Experts believe that trust has to be restored so that actionable intelligence like the one shared on Wednesday can be frequently exchanged.

Ahead of impending visits by Secretary of Defense, James Mattis and Secretary of State, Rex Tillerson, this event is being seen as a positive development in a relationship that has recently had few. However, analysts also warn again reposing too many hopes from this one-off success-story.

GVS approached former Pakistani diplomat Shamshad Ahmed Khan to get his thoughts on the matter and its impact on Pak-US ties. Khan who remained as the foreign secretary from 1997 to 2000 termed this as a positive development but something not substantive enough to play a major role in ending trust deficit.”There is a long way to go; both sides have a lot of trust deficit which can only be done away through constructive engagements while taking greater care in the choice of words,” said the former diplomat.

Khan, with his vast experience and understanding of the nuances of international diplomacy, termed the US policy in the region as part of its overall strategy to counter China’s influence in the region.  However, the veteran diplomat warned Pakistan against confrontation with Washington.

US threatens Iran with UN sanctions if arms embargo ends

The guy who made your favorite cartoon, Tom & Jerry, dies at 95

UN fears for Rohingya being expelled by India