Will Zardari not save his “elder brother” this time? 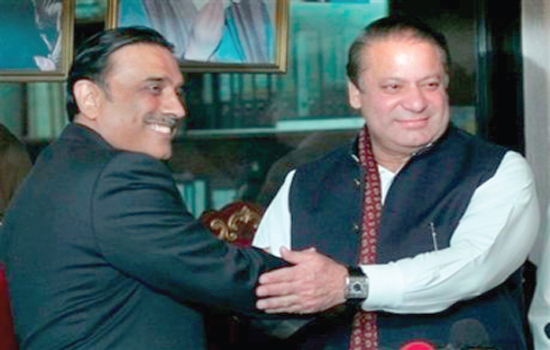 Former President and Co-Chairman of the PPP, Asif Ali Zardari has ruled-out any talks with the deposed premier, Nawaz Sharif. The 61-year old Zardari who returned to Pakistan this week said that he is not interested in establishing contact with Sharif, whom he once called him elder brother.

Zardari said the PPP also has no interest in becoming part of a ‘Grand National Dialogue’ proposed recently by Nawaz Sharif. In a meeting held at Bilawal House, Zardari went on to say that democracy is not under threat; it’s Sharif’s political career that is all but ending.

The PPP has been lambasted for being soft on the government over the pretext of saving democracy. It was Asif Zardari’s luncheon meeting with the then premier Nawaz Sharif which ensured PPP’s support against Imran Khan’s onslaught in 2014.

However, the PPP came out all guns blazing when the Panama Case was in its business end; their representatives and leaders took to press conferences outside the courts, public gatherings and prime time shows to berate Nawaz Sharif.

The PPP and other detractors of Nawaz remind him of his vociferous support to the Supreme Court ruling which ousted PPP’s premier Yousaf Raza Gillani in 2012.

Chairman Bilawal Bhutto rejected the idea of cooperation with the PML-N over its efforts to abolish Articles 62 and 63 from the Constitution. Bilawal not only reminded Nawaz Sharif of his military-planted antecedents but also of his subversive politics in the past. Bilawal also said that he would decline the call of PML-N.Federal Minister Saad Rafique said:”Bilawal said he will not receive our call, we have not called him. I do not understand who is advising Bilawal.” Rafiq added that the sensible father (Zardari) should talk through with his son.

The PPP and other detractors of Nawaz remind him of his vociferous support to the Supreme Court ruling which ousted PPP’s premier Yousaf Raza Gillani in 2012.Nawaz, before starting off his GT Road rally stated that Gillani was also wrongly removed.

The statement was censured by the PPP and hence the opposition was unable to field a joint candidate to contest the election of the prime minister.

Though for now, the PPP is not willing to shake hands with PML-N, a marriage of convenience cannot be ruled-out. There are reasons which can bring both parties together in the near-future. The most glaring of them all is Imran Khan. The 64-year old Khan, after leading a successful campaign to oust Nawaz from office has reiterated his resolve to continue his anti-corruption drive. In his Thanksgiving speech, he said:”Zardari, now it is your turn.”

The statement was censured by the PPP and hence the opposition was unable to field a joint candidate to contest the election of the prime minister. PPP has again started to mock and criticize Khan, terming his politics as immature and disruptive. Khan says it is a vindication of his long-held assertions that both PML-N and PPP are comrades in arms; they cannot go against each other and only decry each other for optics.

PTI will also have to face PPP in the elections; the party has also started mass contact campaign, especially in Punjab. Khan, as part of his election campaign, will also target corrupt practices of the PPP and its leadership.

With a common foe in Khan, PPP and PML-N may be compelled to join hands in the days to come. Even otherwise both will have to give inputs in the establishment of a caretaker setup; there are reasons for them to avoid frictions.

However, the future of PPP-PML ties will hinge upon two factors. Firstly, the health of PML-N over the next few months will be an important factor. If the review petition doesn’t gain traction; PML-N loses NA-120 and NAB proceedings are not impeded, PML-N will be on the look-out for crutches. Secondly, PTI’s and Khan’s rhetoric will also be an important determinant. Khan is least expected to lessen his anti corruption tirades, something which will take PPP to task as well.PPP is least likely to develop any love lost with Khan; hence, the elder brother, younger brother politics may well be adopted to counter Khan’s growing popularity.

Use of blasphemy card against Imran Khan: Will it benefit PML-N?