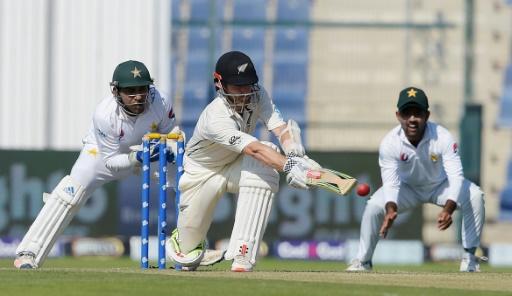 New Zealand skipper Kane Williamson struck a fighting half-century to delay leg-spinner Yasir Shah’s bid to become the fastest to 200 wickets on the opening day of the third and final Test in Abu Dhabi on Monday.

Williamson ground out an obdurate 71 not out to take New Zealand to 145-4 at tea, defying Yasir during his unbroken fourth-wicket stand of 73 with Bradley-John Watling who was unbeaten on 14.

New Zealand, who won the first Test by four runs in Abu Dhabi, brought in fast bowler Tim Southee and off-spinner Will Somerville in place of Neil Wagner and Ish Sodhi.

Before the resolute stand which saw a wicketless post-lunch session, Yasir had derailed New Zealand – who won the toss and batted — with three wickets, two in the same over. Yasir, who has figures of 3-26, needs another two wickets to complete 200 wickets and claim the record in his 33rd Test.

It is currently held by Australian leg-spinner Clarrie Grimmett who reached 200 wickets in his 36th Test, against South Africa in Johannesburg in 1936. Williamson struck five boundaries as he passed 50 in a Test for the 46th time — on 18 of those occassions he went on to make 100.

With both teams needing a win to seal a series which is currently tied at 1-1, Yasir is the key and the leg-spinner induced a mini-collapse in the morning as the Kiwis slipped from 70-1 to 73-4 at lunch.

Yasir trapped opener Jeet Raval leg before with a faster one for 45. Raval reviewed but ball-tracking showed it would have hit leg stump. With his next ball, Yasir clean-bowled Ross Taylor as the batsman went back but completely missed the ball.

Williamson struck five boundaries as he passed 50 in a Test for the 46th time — on 18 of those occassions he went on to make 100.

Henry Nicholls saved the hat-trick but shortly after he attempted to sweep and Yasir flicking the ball as it went through to bowl him around his legs. Yasir, whose 14 wickets helped Pakistan level the series in Dubai, has 25 wickets in the series so far.

It was teenage left-arm paceman Shaheen Shah Afridi, making his Test debut as a replacement for injured medium pacer Mohammad Abbas, who gave Pakistan their initial breakthrough and claim his first Test victim.

The 18-year-old nipped one back sharply to rap opener Tom Latham on the pads. Pakistan reviewed the on-field not out decision and were rewarded when ball-tracking showed the ball would have cannoned into the stumps.

New Zealand, who won the first Test by four runs in Abu Dhabi, brought in fast bowler Tim Southee and off-spinner Will Somerville in place of Neil Wagner and Ish Sodhi.