Women not allowed to worship in Modi’s India 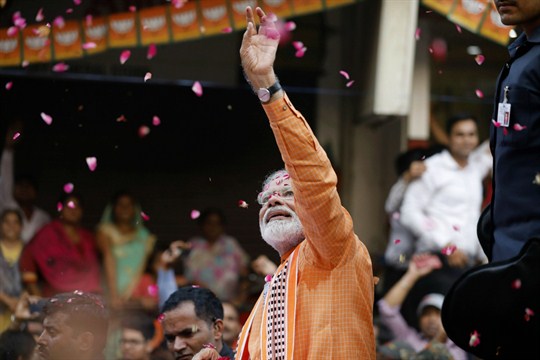 Indian police arrested 68 people taking part in protests around a flashpoint Hindu temple after a plea was made to the Supreme Court Monday seeking more time to follow an order to let women enter. The Sabarimala temple in the southern state of Kerala has become a major battleground between Hindu radicals and gender activists.

Tens of thousands of pilgrims have thronged to the hilltop shrine since it reopened Friday amid unprecedented security. “We arrested 68 devotees after overnight protests around Sabarimala,” V.N Saji, assistant commissioner of Kerala police, told AFP.

The board which manages Sabarimala temple approached the Supreme Court Monday to lodge a plea for more time to admit women, citing a lack of infrastructure.

The region has been increasingly tense with Hindu organisations and Prime Minister Narendra Modi’s Bharatiya Janata Party (BJP) opposing the Supreme Court order to let women in the temple. There have been several protests and strikes. Many pilgrims going to Sabarimala have also complained about restrictions on their movement during the new clampdown.

The Kerala government sent thousands of police to the region fearing a repeat of pitch battles around the temple in October, when the temple first reopened after the Supreme Court ordered the lifting of a longstanding ban on women between the ages of 10 and 50.

Police said many of those arrested late Sunday had been protesting against a ban on spending the night on the hilltop around the temple. Devotees, many shirtless in line with the tradition followed by pilgrims, chanted mantras as they faced off with police.

Tens of thousands of pilgrims have thronged to the hilltop shrine since it reopened Friday amid unprecedented security.

“What the police has done is wrong. I am here with other locals to protest against the arrest of devotees,” Raghunathan Nair, one demonstrator told AFP. He was one of more than 100 people who protested outside a police camp, where all the arrested devotees were being their court hearing.

Read more: Police on high alert ahead of Indian temple opening to women

Dozens of women took part in protests, all chanting mantras and slogans to praise Lord Ayyappa, the celibate deity of Sabarimala temple. About 700 women have registered to pray at the temple over coming weeks however none has yet made it to the hilltop.

Protesters stopped one leading woman activist from leaving the state’s main airport to get to Sabarimala. The board which manages Sabarimala temple approached the Supreme Court Monday to lodge a plea for more time to admit women, citing a lack of infrastructure.

The temple board had expected a decision from the court today, but no date has yet been given for the court to hear the case to delay its ruling. In January, the country’s highest court will also hear challenges to its decision to lift the ban on women.

Princess Haya’s love affair, a mere rumor or a conspiracy?

Nawaz Returned to Residence after London Bridge Hospital was Sealed

Coronavirus could repeat itself in cycles: Claims a top US scientist