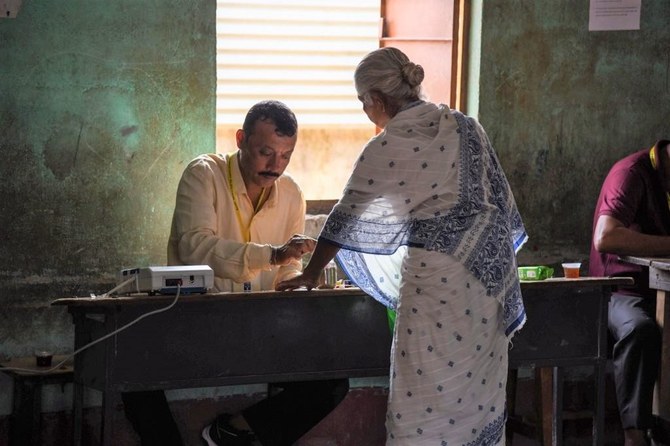 Voters in a flashpoint constituency in southern India went to the polls Tuesday after a campaign dominated by the fallout from the controversial decision to allow women to enter a Hindu temple. The district of Pathanamthitta in the state of Kerala includes the Sabarimala Hindu temple, where two women finally defied a longstanding ban on women of menstruating age last year.

Traditionalists were outraged and many women remain divided over the move, which has overshadowed the campaign with candidates staging election parades on the issue. Kanaka Durga and Bindu Ammini made history in December when police guided them into the hilltop shrine, after the Supreme Court ruled that the ban was unconstitutional.

Tens of thousands of people, including many women, took part in street marches and protests in support of the ban.

Days of pitched battles erupted between traditionalists and activists. The anger has not died down and core issues such as unemployment, health and education have been pushed aside during the campaign. The whole country is expected to follow the result when it is announced on May 23 after India’s marathon election.

Two of the three main candidates in the election are men who support the ban, while the third is a woman who has tried to dodge the topic. Veena George, who is standing for the alliance of left wing parties that runs Kerala’s state government cited an election commission advisory to avoid using the temple to get votes.

“We need a revival of job opportunities, agriculture and infrastructure. Educated women need jobs,” she told AFP on the last day of campaigning before Tuesday’s vote.

Read more: The three women hoping to upset India’s Modi at the polls

India’s main opposition Congress party has fielded Anto Antony, who won the last two elections and has backed the traditionalists. The Bharatiya Janata Party of Prime Minister Narendra Modi has brandished its pro-Hindu credentials as it seeks to make an impact in a state where it has always struggled.

Kanaka Durga and Bindu Ammini made history in December when police guided them into the hilltop shrine, after the Supreme Court ruled that the ban was unconstitutional.

The BJP has fielded K. Surendran, who became the symbol of the massive temple protests across Kerala. He now faces more than 200 police cases related to violence during last year’s Sabarimala protests. “The Communists have an issue with our prayers and religion but they can’t crush believers’ rights,” Modi told a rally in Kerala last week.

“We won’t tolerate any attack on a tradition that has lasted thousands of years,” Modi added to wild cheers. Many women have backed the traditionalist cause. “Local men and women agree. There is only one issue in this election — our faith. And the court shouldn’t have intervened,” Lakshmi, who works at a local hospital, and only uses one name, told AFP.

“I feel hurt as a Hindu when I see things going against our culture and tradition,” added Bindhu, a housewife. “The temple has always been a place where women could not go. It is not acceptable to see people coming and fighting to enter now,” she added. Tens of thousands of people, including many women, took part in street marches and protests in support of the ban.

However, uncertainty remains over how many women will vote for their right to enter Sabarimala. “Women should be free to choose whether to enter or not. To me, women’s safety, here and all over India, is the only issue that is important,” said Ansa S., a medical student.

Lady on Fire’s all woman cast a hit at Cannes

My Dad: The illegal refugee who hired Americans