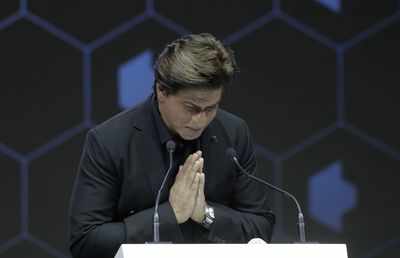 Superstar Shah Rukh Khan was honoured with a Crystal Award at World Economic Forum in Davos, Switzerland on Monday. The actor was given the accolade for raising awareness on human rights issues and his work for acid attack victims.

Khan is the founder of the non-profit organization that provides support to female acid attack victims in the form of medical treatment, legal aid, vocational training, rehabilitation and livelihood support.

While many non-governmental organizations are working to support the victims of acid attacks, their combined efforts fall short to the level of catastrophe that exists in our society.

“We, the powerful, need to get out of the way, to pick the barriers apart, the ones that give us names and races and colours and hierarchies,” he said.

Honoured to receive the @wef’s 24th Crystal Award, together with @eltonofficial and Cate Blanchett. My fan moment!!

Watch the #crystalawards via https://t.co/rILPgHRgtL at the #wef18 meeting in Davos.

“That is what I have learned from my beautifully scarred women,” he added, referring to the acid victims.

World Economic Forum gives Crystal Awards to the artists that endeavours to bring positive change in their society. While accepting an award in the Alps of Switzerland, Khan intensively discussed the brutality of the acid attacks in his heartfelt speech.

In his speech, Shah Rukh said that he learned how “courage can catalyze victimhood into heroism” from acid attack survivors. He also that said in today’s world, “power needs a complete reversal more than anything else.”

Khan is the founder of the non-profit organization that provides support to female acid attack victims in the form of medical treatment, legal aid, vocational training, rehabilitation and livelihood support.

He also shed light on the way he has been brought up well by his sister. He extended his gratitude towards his wife and sister for making him learn the importance of a ‘No’ of a woman.

” I would like to thank my sister (Shehnaz Lalarukh Khan), my wife (Gauri Khan) and my little daughter (Suhana Khan) for bringing me up well and teaching me the value of requesting, sometimes imploring, and may I add, sometimes even begging a yes from a woman instead of forcing it upon her.”

Khan also pointed that it’s the concept of power that requires reversal more than anything in the world.

“To disfigure a woman by throwing acid on her face is, to me, one [of] the basest, crudest acts of subjugation imaginable. At the source of it lies the view that a woman does not have the right to assert her choice. And yet, each of the women I met, I found within them, the courage to move on with their lives and to reject the idea of victimhood. What was done to them only made them braver and stronger and more able to free themselves to make the choices that everyone around them said they could not make or should not make.”

Acid attacks are something Pakistan has to deal with as they are just as rampant in our society as in India. While many non-governmental organizations are working to support the victims of acid attacks, their combined efforts fall short to the level of catastrophe that exists in our society.

The problem cannot be completely wiped out from the society but efforts should be meant to empower females.

No sin tax on cigarettes: A win for the tobacco lobbyists?