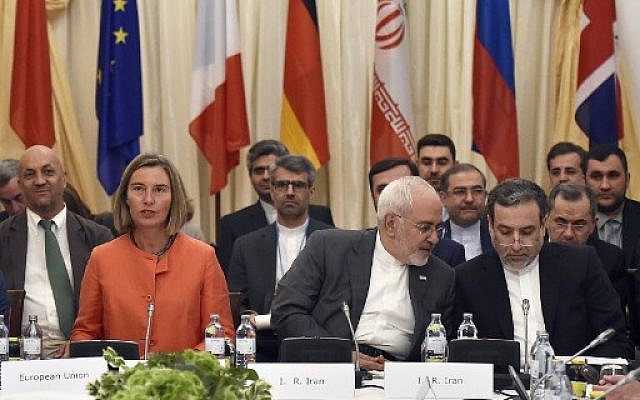 Iran’s remaining partners in the 2015 nuclear deal vowed Friday to keep the energy exporter plugged into the global economy despite the US withdrawal and sanctions threat.

The rial currency has fallen, prices have risen and the country has been hit by street protests and strikes.

Tehran’s top diplomat Mohammad Javad Zarif praised them for their “will to resist” US pressure, two months after President Donald Trump walked away from the landmark accord.

Britain, France and Germany along with Russia and China met with Iran in Vienna to offer economic benefits and assurances that would lessen the blow of sweeping US sanctions announced by Trump.

Read more: US sticks to goal of cutting Iran oil exports to zero

They said they remained committed to the accord and to building up trade and investment links with Iran, including “the continuation of Iran’s export of oil and gas” and other energy products.

“All the members, even the three allies, have committed and have the political will to take action and resist the United States,” Iran’s Foreign Minister Zarif told a Vienna news conference broadcast by the Fars news agency.

“This is the first time they have shown this level of commitment, but we will have to see in the future what they really want to do and what they can do,” Zarif said. “If they continue to demonstrate the political will they showed today, they will get things done without any problem.”

Iranian President Hassan Rouhani had Tuesday labelled the US push to cut Iran’s oil production to zero “a baseless fantasy” and an attempt to drive “imperialist policy in flagrant violation of international law”.

Since Trump’s shock move in May, Washington has warned other countries to end business in Iran and stop buying its oil from early November or face punitive measures.

The foreign ministers Friday agreed on an 11-point list of joint goals in the Austrian capital, where the accord was signed with the aim of stopping Iran from building the atomic bomb in return for sanctions relief.

In the joint statement, they reconfirmed their commitment to the deal and its “economic dividends” for Iran, which has suffered worsening financial turbulence since Trump abandoned the accord.

After the US threat to penalise companies that do business with Iran, the remaining signatories said they would work for “the protection of companies from the extraterritorial effects of US sanctions”.

Although there were no concrete pledges or deadlines, they also vowed efforts to keep open financial channels with Iran, promote export credit cover and maintain open air, sea and overland transport links.

“These initiatives are aimed at preserving the nuclear deal which is in the security interest of all,” said the joint statement read out by EU foreign policy chief Federica Mogherini.

French Foreign Minister Jean-Yves Le Drian said the signatories were trying to respond to “US extraterritorial measures aimed at companies that use the dollar for their commercial transactions”.

“We must put in place measures that allow Iran to trade as long as it meets its commitments,” he told RTL radio in France, cautioning that the new steps may take until November when many of the sanctions take effect.

Friday’s developments came after Iran had voiced initial doubts about the other signatories’ commitment on the eve of talks.

Rouhani had Thursday told French President Emmanuel Macron by phone that the Europe-led offer of economic measures did “not meet all our demands”, Iran’s state news agency IRNA reported.

Trump in May slammed the nuclear accord signed under his predecessor Barack Obama as “horrible” and “defective at its core,” earning applause from Iran’s regional rivals Saudi Arabia and Israel.

“This is the first time they have shown this level of commitment, but we will have to see in the future what they really want to do and what they can do,” Zarif said.

Iran, which strongly denies ever seeking to build a nuclear bomb, has warned it could resume uranium enrichment for civilian purposes if the deal collapses. Since Trump’s shock move in May, Washington has warned other countries to end business in Iran and stop buying its oil from early November or face punitive measures.

Several major firms — including France’s Total and Peugeot, and Russia’s Lukoil — have said they are preparing to leave. The rial currency has fallen, prices have risen and the country has been hit by street protests and strikes.

German Foreign Minister Heiko Maas conceded that “we won’t be able to compensate for all the effects of enterprises withdrawing from Iran because they see their American business interests threatened by the sanctions”.

“After the withdrawal of the United States, which we can’t understand, we face a difficult situation,” he added, but he stressed that “we want to make clear to Iran that it will still gain economic benefits through this agreement”.

Russian MPs back unlimited deployment of Air Force in Syria

How to Use SMART Goal to Become Highly Successful in Life

For Yemenis, shaky truce not much different from war