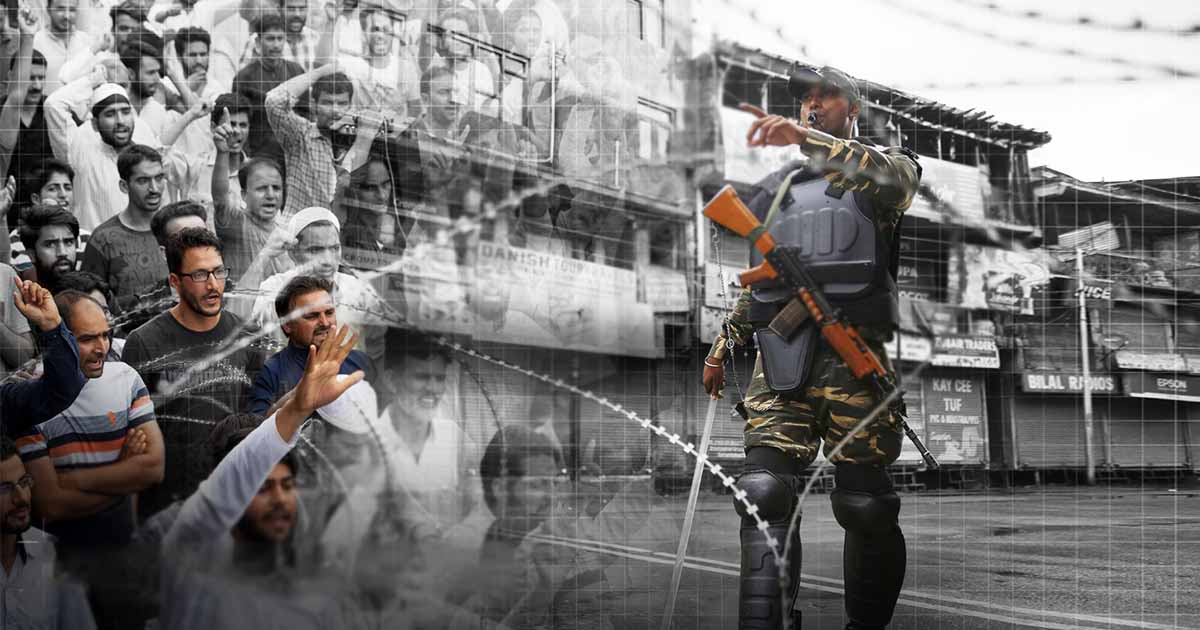 Addressing a large number of people forming the ‘human chain’ from D-Chowk to Radio Pakistan Chowk in Islamabad on Friday Oct 11, 2019 to express solidarity with the plight of Kashmiris under Indian occupation, PM Imran Khan expressed deep disappointment over the blanket coverage of Hong Kong protests by the international media while keeping silence over gross human rights violations in India-occupied Kashmir. He rightly pointed out the double standards inherent in this attitude.

The Hong Kong riots are clearly an integral part of hybrid warfare under the false flag of a ‘pro-democracy’ opposition movement instigated to create trouble for China in ruling this part of their country. The Western countries and especially Europe have distanced themselves to a certain degree because ultimately it hurts their own interests if China cracks down to restore order as it well might.

This is even more so because Europe has its own peculiar problems with new super power China in the matter of trade, the Belt Road Initiative may even make Hong Kong ultimately irrelevant. On the other hand, Europe and the West have no stakes in Kashmir. A far-away place, most don’t know (or refuse to acknowledge) the historical background of the Kashmir conflict and they are not interested in learning about unless impressed upon.

Human rights of Kashmiris, yes, very sad, but let’s face it: India is a much larger market and has a much better image than Pakistan. Therefore US official Alice Wells recent testimony in the US Senate criticizing Indian repression in Indian Occupied Kashmir and urging restraint was very much needed. She diplomatically hedged it by talking about press freedom in Pakistan, what about any Press freedom in Kashmir, indeed what about media freedom being selective even in India?

Does that mean that creating an understanding and empathy if not sympathy in the West for the Kashmir cause is impossible? Certainly it is not but it needs extra efforts to carry the message across. Because apart from the political establishment and the big business in Europe and the West there are people there who do care for others and who are ready to help when help is needed. Just remember the wave of help for the refugees overrunning Europe. But things have to be explained to them in a proper way.

PM Imran Khan’s speech in New York at the UNGA was a tremendous extra effort that got the message across. But the public there was limited and the speech was not widely transmitted in international TV, particularly in Europe and the US. So his message needs to be supported by further and wider efforts to explain the situation not only to the establishment, but to civil society and the people at large. To organize and sustain such a campaign is the directly responsibility of our Foreign Office, and to a certain degree by the Information Ministry. Like Maryam Aurangzeb before her, Firdous Awan focusses only on internal political opponents.

Unfortunately, the Foreign Office, the Foreign Minister and the embassies so far have failed in getting Kashmir the attention that is needed. While Kashmir has been a focus of foreign policy of Pakistan for many years, its treatment has become a command exercise in the embassies with dull programs for the ‘inner circle’ only without creating an impact in the host society. Why would on each 5th February the same people, mostly Pakistanis, may be some diplomats from other embassies and the wives of the staff come together to listen to a dull and routine proforma speech about Kashmir by whoever is the Ambassador? What understanding does that create or what empathy in the host country?

One suggestion that we have repeatedly made in order not let to the steam of Imran Khan’s speech deflagrate is to send retired ambassadors to the capitals where they had once been stationed and by utilizing their contacts with friends there reach out to a wider circle of the population in an effort to explain the situation in Kashmir. Of course, for the former diplomats to be chosen for such a program one has to make sure that they have had such contacts and are still in touch with them.

It should not be a nostalgia trip financed by the exchequer for them. And the kind of sessions they should organize have to be inter-active with the public. Only real discussions about why Pakistan is so interested and emotional about it, why it is dangerous to let India have its way, what the dangers are and other questions that would be asked have to be allowed. They should go to the universities to address academics and young people who are already doing work on questions of democracy and human rights.

Another idea could be to utilize the cultural attaches as heads of Pakistan cultural centres that not only present Pakistani views on Kashmir but who acquaint the foreign public with Pakistani culture like art, fashion, literature, movies

Ask the German political foundations in Islamabad and the French and other cultural centers for help in the respective countries. Be ready to face the Indians who are present over there in big numbers and who will be certainly attending anything on Kashmir and not be quiet on it. And present Kashmiris wherever possible who can speak for themselves. Why is our Foreign Minister Shah Mahmood Qureshi deaf to this idea? Or is it that he just does blind to any idea if it comes from someone other than himself?

Some help has already come from abroad. Turkey and Malaysia, two large and important Muslim countries, have supported Pakistan’s stand openly. Just a couple of days ago the Malaysian PM Mahatir repeated his resolve that he would not retract his criticism of New Delhi’s actions in Kashmir even though Indian traders have urged a boycott of Malaysian palm oil. The impasse could exacerbate what Mahathir described as a trade war between the world’s second biggest producer and exporter of the commodity and its biggest buyer so far this year so there is a big stake for Malaysia in their support.

Turkish President Recep Tayyip Erdogan had come forward and urged India to hold talks with Pakistan over the disputed region of Kashmir following Modi’s decision in August to revoke seven decades of autonomy in the disputed Muslim-majority state. Indian PM Modi has delayed a planned visit to Ankara this year to show displeasure over the Turkish President’s comments and mulls other sanctions like the decreasing of Turkish imports.

There could be other initiatives as well. Pakistan has for many decades neglected to foster and nurture its image in the world. We have left the space to India and the mostly pro-Indian media. So another idea could be to utilize the cultural attaches as heads of Pakistan cultural centers that not only present Pakistan’s views on Kashmir but who acquaint the foreign public with Pakistani culture like art, fashion, literature, movies.

There has to be a budget for this to be able to invite artists and writers, to bring paintings and other pieces of art for an exhibition and to properly advertise the programs. The embassies of Turkey and Malaysia could be asked to team up in the efforts in Western capitals to invite other countries to join their protest against India’s atrocities in Kashmir. There could be more and different ideas. But the long and the short of it is that wondering why the world is not interested in the plight of Kashmir is not enough. One has to do something, and in this case even go out of one’s way to get the message across.

Ikram Sehgal, author of “Escape from Oblivion”, is Pakistani defence analyst and security expert. He is a regular contributor of articles in newspapers that include: The News and the Urdu daily Jang. The article was first published in Daily Times and has been republished with the author’s permission. The views expressed in this article are the author’s own and do not necessarily reflect Global Village Space’s editorial policy.