The military show of force was followed by a pageant involving 100,000 civilians and 70 floats depicting China's greatest achievements. A giant portrait of Mao, followed by those of past leaders and Xi, streamed across the avenue as the president and other officials waved. 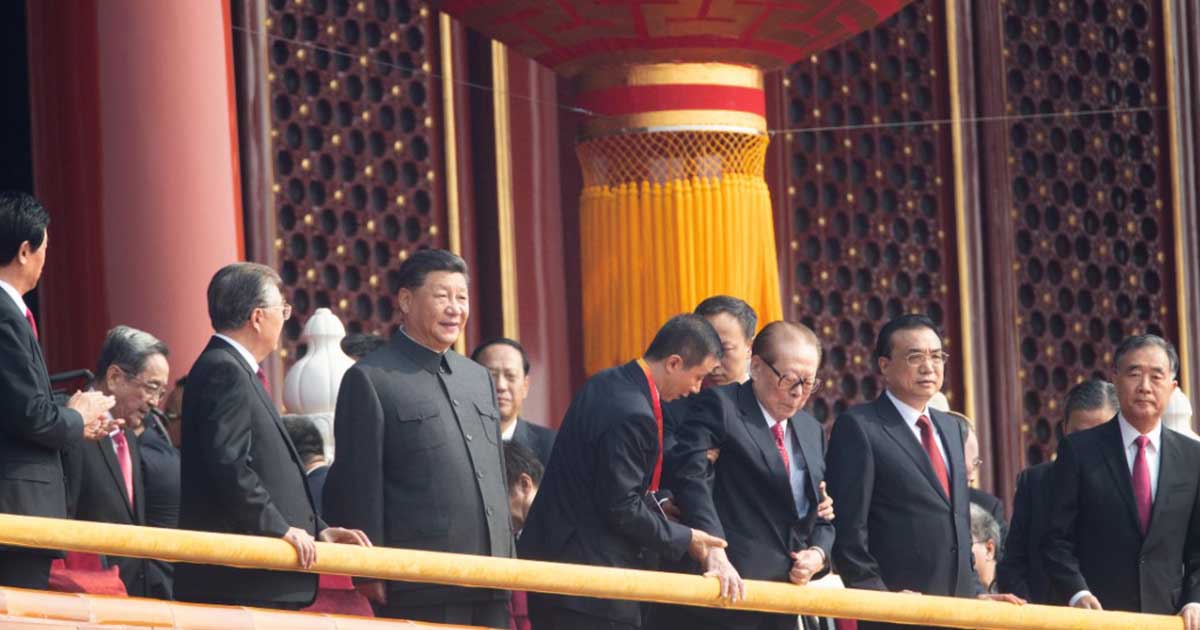 President Xi Jinping declared Tuesday that “no force” can shake China as he oversaw a huge military parade to celebrate 70 years of Communist Party rule, shadowed by protests in seething Hong Kong that threatened to steal the spotlight.

#China70Years A phalanx holding the portrait of Chinese President Xi Jinping pass the Tiananmen Square to mark the country’s great rejuvenation as the country has stood up, grown rich, and is becoming strong. pic.twitter.com/k360BLaiQd

Some 15,000 troops along with tanks, new nuclear missiles and a supersonic drone paraded down the Avenue of Eternal Peace as Xi and other Communist Party leaders watched from a rostrum overlooking Beijing’s Tiananmen Square.

The event was meant to extol China’s journey from a poor nation broken by war to the world’s second-largest economy, but Xi faces a clutch of challenges from a US trade war to months of unrest in Hong Kong.

Xi, who wore the distinctive “Mao suit”, delivered a speech invoking the “Chinese dream” of national rejuvenation — his grand vision of restoring the country to perceived past glory.

Under Mao, tens of millions of people died during the disastrous Great Leap Forward, and the country was plunged into violent chaos during the decade-long Cultural Revolution.

“There is no force that can shake the foundation of this great nation,” Xi said from the Tiananmen rostrum where Chairman Mao Zedong proclaimed the People’s Republic of China on October 1, 1949.

“No force that can stop the Chinese people and the Chinese nation forging ahead,” the country’s most powerful leader since Mao said before reviewing troops in an open-roof car.

Helicopters flew in a “70” formation over the city as troops goosestepped across Tiananmen Square in what state media described as the country’s biggest-ever military parade, featuring 580 pieces of armament and 160 aircraft.

The People’s Liberation Army brought out its newest hardware, including the DF-41, a nuclear-capable intercontinental ballistic missile with range enough to reach the entire United States, and the DF-17, a launcher for a hypersonic glider.

Warplanes including the J-20 stealth fighter soared through the smog-choked skies, and state media said a high-altitude, high-speed reconnaissance drone made a public appearance for the first time.

“The party hopes that this occasion will add to its legitimacy and rally support at a time of internal and external challenges,” Adam Ni, China researcher at Macquarie University in Sydney, told AFP.

US trade war negotiations have dragged on, and African swine fever has raced through the country’s pig supply, sending pork prices soaring. But the major headache is Hong Kong, where pro-democracy protesters hit the streets early, with a series of rallies against what they see as the erosion of their special freedoms.

Thousands defied a police ban to march through the centre of the city, the scene of violent clashes during almost four months that have seen the worst unrest since Britain returned it to China in 1997.

In his speech, Xi said China “must adhere” to the one country, two systems policy governing Hong Kong and “maintain the long-term prosperity and stability” of the city. He also called for the “peaceful development” of relations with Taiwan — the self-governed island that Beijing considers a renegade province — but said China should “continue to fight for the full reunification of the country.”

Xi’s words on Hong Kong “won’t of course reassure everyone but it shows the limits within which Beijing wants to operate vis a vis Hong Kong in the future, in spite of its increasing interference in local affairs,” said Jean-Pierre Cabestan, professor of political science at Hong Kong Baptist University.

The Beijing festivities were held under tight security, with road closures and even a ban on flying kites.

The military show of force was followed by a pageant involving 100,000 civilians and 70 floats depicting China’s greatest achievements.

A giant portrait of Mao, followed by those of past leaders and Xi, streamed across the avenue as the president and other officials waved.

Replicas of a space rocket, a homegrown passenger plane and high-speed trains were followed by smiling ethnic minorities — imagery that glosses over accusations of human rights abuses in the frontier regions of Tibet and Xinjiang.

The Communist Party has repeatedly defied the odds to remain in power for seven decades. Under Mao, tens of millions of people died during the disastrous Great Leap Forward, and the country was plunged into violent chaos during the decade-long Cultural Revolution.

After Mao’s death in 1976, the party launched the reform and opening-up policy under paramount leader Deng Xiaoping, starting decades of breakneck growth and development. But the party retained a stranglehold on power, sending troops to end the biggest challenge to its rule in 1989 when pro-democracy protesters occupied Tiananmen Square.

Xi has made clear that he believes only the Communist Party can make the country realise its dream — with him at the helm.