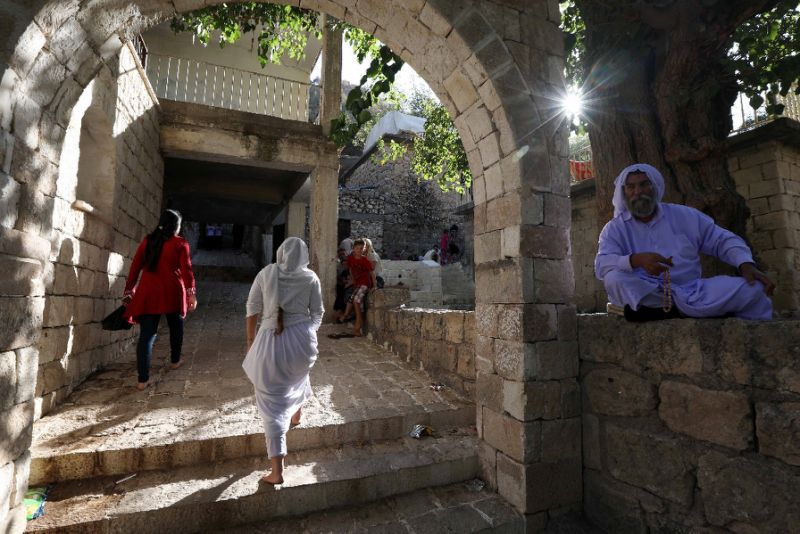 Yazidi pilgrims trekked up a mountain in northern Iraq barefoot Friday for their most important ritual, their joy doubled on hearing that their “daughter” Nadia Murad had won the Nobel Peace Prize.

During the seven-day festival, known as the Jemayyiat, friends and families gather around the tomb of their founder Sheikh Adi at a mountain top temple in the holy town of Lalish.

They unite as a people to worship and eat together in a festive mood which this year has taken on a whole new flavour because of Murad.

“We are very happy because she won,” said pilgrim Loqman Suleiman as he walked along the one-kilometre path to the temple.

“She is the Yazidi voice from abroad and she speaks for all our nation,” he said.

All around him, pilgrims flocking to Sheikh Adi’s shrine are all smiles and proud of the young Nobel peace laureate, the first Iraqi to receive such an honour.

Murad, a 25-year-old Yazidi campaigner, will share the 2018 Nobel Peace Prize with Congolese doctor Denis Mukwege for their work in fighting sexual violence in conflicts around the world.

The young woman is a former Islamic State group sex slave who in 2014 was kidnapped by the militants and held three months before she managed to escape.

She survived the worst cruelties inflicted on her people.

Thousands of Yazidi women and girls were abducted, raped and brutalised by militants during their assault on the Kurdish-speaking minority, which the United Nations has described as genocide.

‘We pray for her’

Murad once lived a quiet life in the village of Kocho in the Yazidi stronghold of Sinjar close to the border with Syria before the militants turned it into hell.

Years after her ordeal she campaigns for the 3,000 Yazidis who remain missing, presumed still in IS captivity, with Lamia Haji Bashar, a friend with whom she shared the 2016 Sakharov human rights prize.

Zeri Khodr, who is also from Kocho, said 12 members of her family who were abducted by Daesh militants are still among the missing and Nadia’s efforts to lobby for their release is of utmost importance.

“Nadia used to visit us in the (refugee) camps to ask about our welfare,” Khodr, 40, said.

“She is like a daughter to us and we pray that she will continue her fight” for the missing Yazidis, she added.

The Yazidis are one of Iraq’s most vulnerable minorities who mainly live in remote corners of northern Iraq and are followers of an ancient religion that emerged in Iran more than 4,000 years ago.

Their faith is rooted in Zoroastrianism but has over time integrated elements of Islam and Christianity.

With no holy book and organised in castes, Yazidis pray to God facing the sun and worship his seven angels — first and foremost Melek Taus, or Peacock Angel.

Yazidis believe that the seven angels gather during the seven-day Jemayyiat festival to shower those who gather at the Lalish temple with their blessings.

And on Friday they were truly blessed as the Nobel committee announced that Murad became a peace laureate.

“Today marks a special day for the Yazidis and other minorities and all victims of Genocide and mass atrocities committed” by IS, said the Yazidi NGO Yazda.

“We hope that this recognition will help Nadia and Yazidis endeavours to bring justice, peace, and coexistence,” Yazda tweeted on Friday.