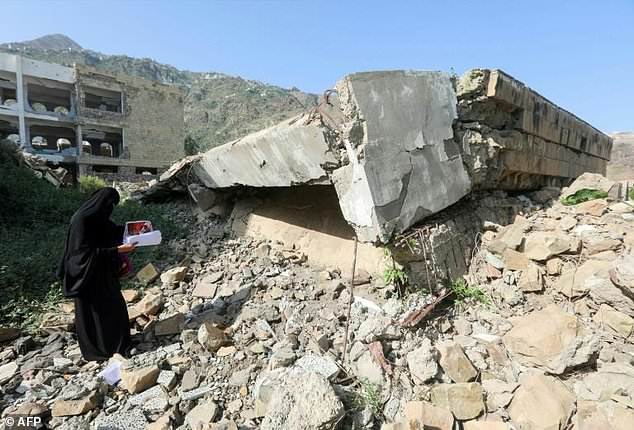 A Yemeni activist who was held and allegedly tortured for months by Huthi rebels this week criticised the UN-backed peace process for his country as “naive”, warning against “humanizing” his captors. Hisham Al-Omeisy, an outspoken activist, journalist and political commentator, was arrested in August 2017 after speaking out against restrictions and corruption in rebel-held areas of the war-ravaged country.

Omeisy, who has also harshly criticised the actions of the Saudi-led coalition that has been fighting the rebels since 2015, says the Huthis accused him of being an American and Saudi spy. “I was tortured in prison… They employed barbaric measures,” he told AFP in an interview on the sidelines of the UN Human Rights Council in Geneva.

“The international community, and especially the Saudis, are willing to fight this war to the last Yemeni”.

He warned that UN officials trying to bring both sides to the table to hammer out a peace deal were being “played by the Huthis”. Omeisy was finally released in January after an international campaign to secure his freedom. He lives in Cairo but says he still follows the situation at home.

Yemen’s war pits forces loyal to President Abed Rabbo Mansour Hadi’s government against Iran-backed Huthi rebels, who seized control of the capital Sanaa in 2014. Some 10,000 people have died since the conflict escalated in 2015 when the Saudi-led coalition entered the fighting to support the government.

UN mediator Martin Griffiths tried earlier this month to organize the first negotiations between Yemen’s warring sides in two years, but the Huthis failed to show up in Geneva. Omeisy said the rebels refusal to come should not have been a surprise and questioned whether those trying to broker peace sufficiently understand the complexities of the conflict.

“The process came off as very naive and overly simplistic,” he said. A major mistake, he said, was trying to “humanize” the Huthis. Omeisy said he knew from his time in Huthi custody how brutal they were. “They would hang me from the wall, beat me up. I had cuts and bruises all over my body,” he said, displaying scars on his wrists from metal cuffs and a stab wound on the back of one hand. He also had pictures of big, red scars on his back and thigh.

His interrogators demanded that he confess on video to being a spy, but Omeisy said he refused, pointing out that if he had given in, “I know I would have been executed”. He said he was held alone in a tiny concrete cell with no light and no toilet and was often denied food and water. “They dehumanize you,” he said, adding that he knew of at least 16 journalists who were held in his block. He says he is haunted by their screams.

The UN insists there is no military solution to Yemen’s conflict, but Omeisy insisted it would be preferable to go in quickly to retake the areas under Huthi control, instead of allowing the conflict to drag on. The impression on the ground, he said, is that “the international community, and especially the Saudis, are willing to fight this war to the last Yemeni”.

The investigators “are independent” and enjoy “enormous credibility on the ground”, Omeisy said, adding that it was “extraordinarily important that it continues its work”.

He described the Yemen conflict as Syria “on steroids”. While Syria’s war has been raging for more than seven years, he warned that Yemen’s conflict could “drag on for 70”. The UN process was “flawed”, he said. “You need something beyond just good intentions. You need a solid strategy, and you need a solid implementation.”

Omeisy meanwhile said he strongly supported the work of a group of investigators appointed by the UN Human Rights Council a year ago to probe violations in Yemen. In a report presented to the council Wednesday, the investigators said there was a reason to believe that all sides in Yemen’s conflict had committed “war crimes”.

The council is due to determine this week if the probe can continue for another year, but Saudi Arabia and others are opposed to extending its mandate. The investigators “are independent” and enjoy “enormous credibility on the ground”, Omeisy said, adding that it was “extraordinarily important that it continues its work”.

End of an era: Japan’s emperor kicks off abdication rites

The prospects of Islamabad’s marriage with Moscow