Yemen: Around 10,000 dead and a humanitarian crisis 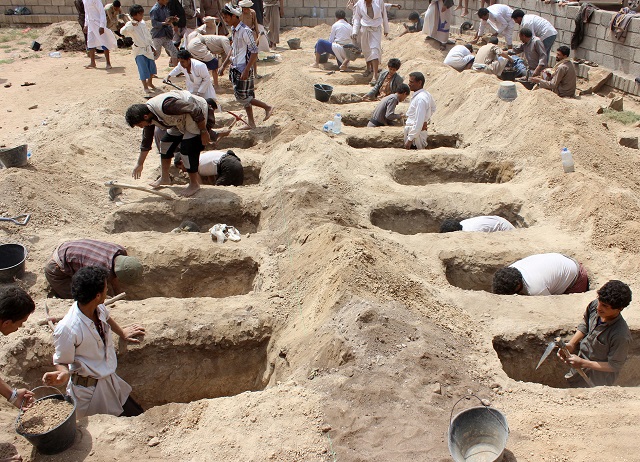 The war in Yemen has since March 2015 left around 10,000 people dead, the vast majority civilians, and caused the world’s worst humanitarian crisis, according to the United Nations.

The conflict pits government forces against Iran-backed Huthi rebels, who seized control of the capital Sanaa in 2014. The conflict escalated in 2015 when a Saudi-led coalition launched military operations to come to the aid of President Abed Rabbo Mansour Hadi and his internationally-recognized government.

Civilians, in particular children, pay a heavy price during the conflict. On Thursday, at least 29 children were killed in an air strike on a bus blamed on the coalition. According to the World Health Organization (WHO), the conflict has killed since 2015 around 10,000 people, including 9,500 civilians, and left more than 55,000 injured.

The UN children’s fund UNICEF last month slammed the devastating impact of the conflict on children, with some 2,200 minors killed and 3,400 injured in the fighting. “These are only numbers we have been able to verify. The actual figures could be even higher,” said Henrietta Fore, UNICEF executive director.

Children make up half of the some 22 million people in Yemen. Several raids blamed on the coalition have left many civilian victims, including on a wedding hall in the town of Mokha in September 2015, killing 131 people. The alliance denies responsibility.

In October 2016, a coalition air strike at a funeral in Sanaa killed 140 people. The coalition, accused of multiple mistakes, has admitted responsibility for certain raids, but accuses the rebels of using civilians as human shields.

Read more: Gulf crisis continues to fuel the fire in Syria and Iran

Yemen has seen more than a million suspected cholera cases, including 2,200 deaths, amid the conflict. In early August the WHO announced that a new “major wave” of cholera cases is likely to hit Yemen.

The warning came a day after a deadly strike on Yemen’s largest hospital in the rebel-held port city of Hodeida, where WHO staff were preparing the cholera vaccination drive at the time of the attack.

According to a UNICEF study in March 2018, nearly half a million children have abandoned school since the conflict escalated, bringing to two million the number of children without schooling. “A whole generation of children in Yemen is faced with a dark future due to the limited or inexistent access to education,” a UNICEF representative in Yemen said.

More than 2,500 schools are out of use, of which two thirds have been damaged in attacks, 27 percent closed and seven percent used by the military or as shelters for displaced people. According to UNICEF, at least 2,419 children have been recruited as soldiers since 2015.

In March 2017, Stephen O’Brien, the UN’s under-secretary general for humanitarian affairs, said that Yemen was the scene of “the largest humanitarian crisis in the world”. Two thirds of the population are in need of assistance and more than seven million have no regular access to food, he said, pointing to massive displacements of people due to the conflict.

According to UNICEF, 78 percent of Yemenis live in poverty. 1.8 million children under five and 1.1 million pregnant or breastfeeding women suffer from acute malnutrition, an increase of 128 percent since late 2014. More than half of minors do not have access to drinking water or adequate sanitation, it said.

In March 2018, Amnesty International accused Western countries of supplying Saudi Arabia and its allies with arms for attacks “many of which may amount to war crimes”.

In July, Amnesty said human rights violations in a string of Yemeni prisons run by the United Arab Emirates, a key coalition member, could amount to war crimes, in a report rejected by Abu Dhabi.