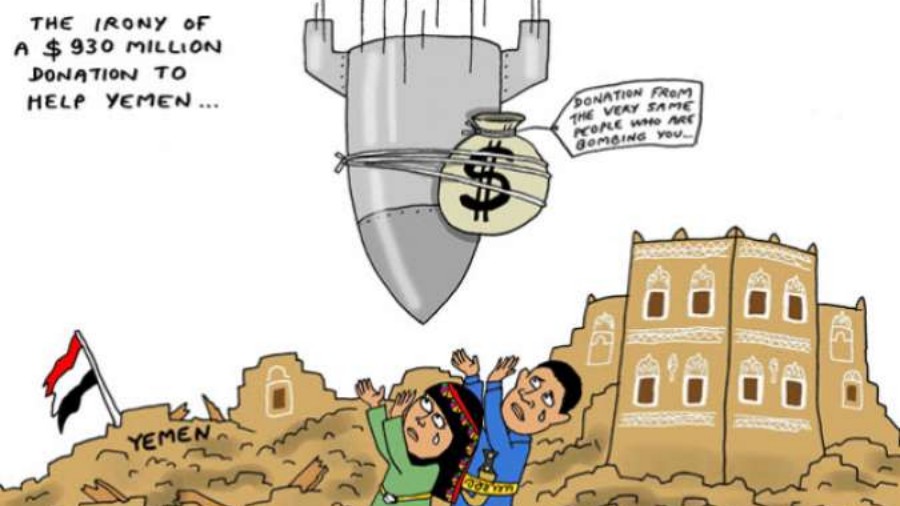 Saudi conduct of its ill-fated war in Yemen coupled with Crown Prince Mohammed bin Salman’s alignment with the Trump administration and Israel, and his often coercive approach to diplomatic relations, has opened the door to challenges of the kingdom’s moral leadership of the Sunni Muslim world, a legitimizing pillar of the ruling Al Saud family’s grip on power.

The cracks in Saudi legitimacy are being fuelled by the escalating humanitarian crisis in Yemen, described by the United Nations and aid organizations as the world’s worst since World War Two; shocking civilian deaths as the result of attacks by the Saudi-led coalition; electoral successes by populist leaders in countries like Malaysia, Turkey and Pakistan; and the kingdom’s inability to impose its will on countries like Qatar, Jordan, Lebanon, Kuwait and Oman.

An attack this week on a bus in the heartland of Iranian-backed Houthi rebels that killed at least 43 people, including 29 children returning from a summer camp, dealt a significant body blow to Saudi moral authority. The coalition said it would investigate the attack that has sparked international outrage.

The attack was but the latest of multiple incidents in which weddings, funerals, and hospitals have been hit by coalition forces in a war that has gone badly wrong and demonstrates Saudi military ineptitude despite the fact that the kingdom’s armed forces operate some of the world’s most sophisticated weaponry, according to military sources.

Mr. Trump reversed a decision by his predecessor, Barack Obama, to halt the sale of air-dropped and precision-guided munitions until it had better trained Saudi forces in their targeting and use of the weapons. An Obama official said at the time that there were “systemic, endemic” problems in Saudi targeting.

“Malaysia and other Muslim nations can no longer look up to the Saudis like we used to. They can no longer command our respect and provide leadership. The Saudis have abandoned the Palestinians, just like the Egyptians. The Saudis have moved much closer to Israel who is suppressing and killing the Palestinians,” said Raja Kamarul Bahrin Shah Raja Ahmad, a member of Malaysia’s upper house of parliament and the head of the ruling Pakatan Harapan (Alliance of Hope) coalition in the Malaysian state of Terengganu.

The cracks in Saudi legitimacy are being fuelled by the escalating humanitarian crisis in Yemen, described by the United Nations and aid organizations as the world’s worst since World War Two

“Perhaps Malaysia under the leadership of Dr. Mahathir Mohamad should take the lead again in speaking up for the oppressed Muslims of the world. It is about time Malaysia again show the leadership that was once so much admired and respected worldwide,” Mr. Bahrin added. Malaysia has sought to distance itself from Saudi Arabia since the return to power in May of Mr. Mahathir, whose past Islamist rhetoric and stark anti-Israeli and anti-Jewish statements propelled him to prominence in the Islamic world.

In anticipation of investigations into allegations of corruption against former prime minister Najib Razak and his recent indictment, Seri Mohd Shukri Abdul, Mr. Mahathir’s newly appointed anti-corruption czar, noted barely a week after the May election that “we have had difficulties dealing with Arab countries (such as) Qatar, Saudi Arabia, (and the) UAE.” Speaking to Al Jazeera last month, Mr. Mahathir said that “we are disappointed that Saudi Arabia has not denied that the money was given by Saudi,” referring to $681 million in Saudi funds that were allegedly gifted to Mr. Razak.

Malaysia is but the latest Sunni Muslim nation to either challenge Saudi Arabia or at least refuse to kowtow to the kingdom’s foreign policy as it relates to its bitter rivalry with Iran; Prince Mohammed’s tacit backing of US President Donald J. Trump’s staunch support of Israel and pressure on Palestinians; its 14-month old economic and diplomatic boycott of Qatar in cooperation with the United Arab Emirates, Bahrain and Qatar; and the war in Yemen.

Islam cannot be either ‘moderate’ or ‘not moderate.’ Islam can only be one thing. Recently the concept of ‘moderate Islam’ has received attention.

Like Mr. Mahathir in the past, Turkish President Recep Tayyip Erdogan, despite his evolving autocracy, has emerged as an Islamist populist counterpole, his credibility enhanced by his escalating disputes with the United States, his often emotional support for the Palestinians, and opposition to moves by Mr. Trump like his recognition of Jerusalem as the capital of Israel.

Mr. Erdogan’s Turkey this week became the latest target of Mr. Trump’s wielding of trade and economic sanctions as a means of bullying countries into submitting to his demands. Mr. Trump doubled metals tariffs on Turkey after earlier sanctioning two senior Turkish ministers in an effort to force Mr. Erdogan to release American evangelist Andrew Brunson.

Mr. Brunson has been detained in Turkey for the past two years on charges of having been involved in the failed 2016 military coup against Mr. Erdogan and seeking to convert Turkish Kurds to Christianity.

Mr. Erdogan has in recent years consistently thought to thwart Saudi policy in the region by positioning himself as the leader of a Muslim world opposed to Mr. Trump’s Israel-Palestine approach and a de facto Arab alliance with Israel, maintaining close ties to Iran and defying US sanctions against the Islamic republic, supporting Qatar, and expanding Turkish influence in the Horn of Africa in competition with the UAE, Saudi Arabia’s closest regional ally.

Mr. Erdogan has portrayed Prince Mohammed’s vow to return Saudi Arabia to an unidentified form of ‘moderate Islam’ as adopting a Western concept. “Islam cannot be either ‘moderate’ or ‘not moderate.’ Islam can only be one thing. Recently the concept of ‘moderate Islam’ has received attention. But the patent of this concept originated in the West. Perhaps, the person voicing this concept thinks it belongs to him. No, it does not belong to you.

Mr. Trump reversed a decision by his predecessor, Barack Obama, to halt the sale of air-dropped and precision-guided munitions until it had better trained Saudi forces in their targeting and use of the weapons

They are now trying to pump up this idea again. What they really want to do is weaken Islam. We don’t want people to learn about religion from foreign facts,” Mr. Erdogan said. Echoing former US president George W. Bush’s assertion of an axis of evil, Prince Mohammed charged in March that Turkey was part of a triangle of evil that included Iran and Islamist groups. The crown prince accused Turkey of trying to reinstate the Islamic Caliphate, abolished nearly a century ago when the Ottoman empire collapsed.

Similarly, Pakistan’s prime minister-in-waiting appeared to be charting his own course by saying that he wants to improve relations with Iran and mediate an end to the debilitating Saudi-Iranian rivalry despite the fact that the kingdom has so far ruled out a negotiated resolution and backs US efforts to isolate the Islamic republic.

In a bow to Saudi Arabia, Jordan has backed the kingdom in its row with Canada over criticism of Riyadh’s human rights record and refrained from appointing a new ambassador to Iran but has stood its ground in supporting Palestinian rejection of US peace efforts.

Similarly, Lebanese prime minister Saad Hariri has reversed his resignation initially announced in Riyadh last year under alleged duress while Oman and Kuwait, alarmed by the Saudi-UAE campaign against Qatar, have sought to chart a middle course that keeps them out of the firing line of Riyadh and Abu Dhabi. For the time being, Saudi Arabia is likely to successfully fend off challenges to its leadership of the Muslim world.

However, responding viscerally to criticism like in the case of non-Muslim Canada or, more importantly, two years ago to Muslim leaders who excluded Wahhabism and Salafism, the religious worldview that underpins the Al Sauds’ rule, from their definition of Ahl al-Sunnah wal-Jamaah or the Sunni people, is unlikely to cut ice in the longer term.