Zainab Alert Bill: Govt moves to protect every “Zainab” in the country

National Assembly unanimously passed Zainab Alert, Response and Recovery Bill to strengthen the justice system against child abuse cases. Legislatures from government and opposition poured in tweets calling it a landmark decision in a fight to protect children of Pakistan. 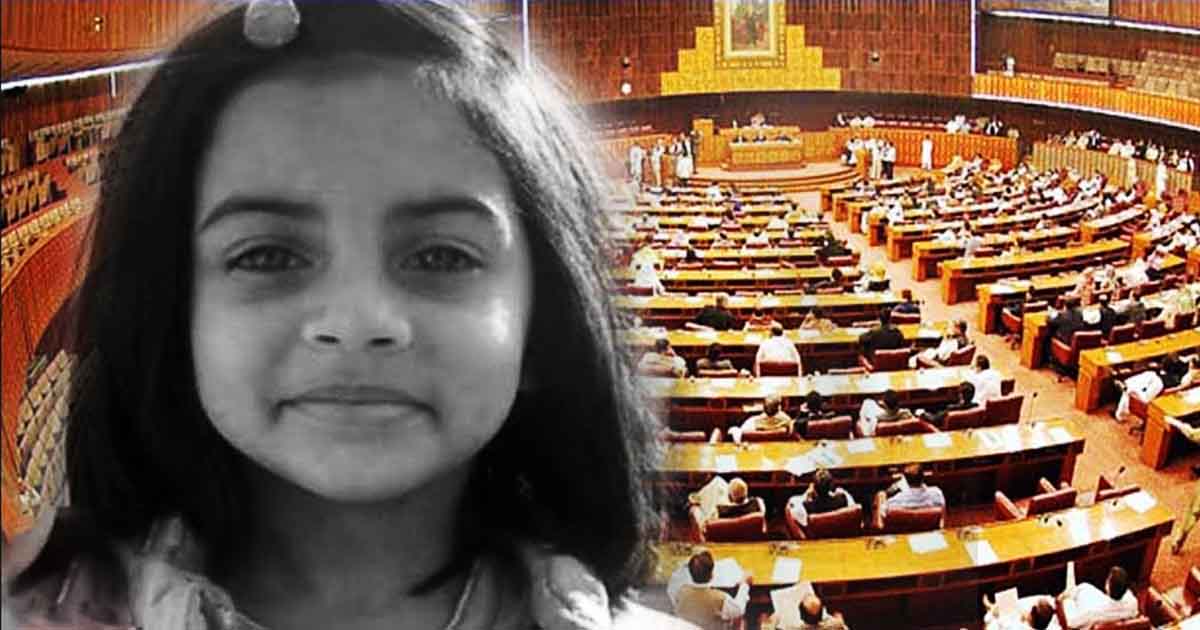 In a historic move, National Assembly unanimously passed the Zainab Alert, Recovery and Response Bill on Friday, 9th January. The bill introduced a multitude of measures to speed up the recovery of missing children and the conviction of child abusers in sexual assault cases.

The bill is named after and approved on the second death anniversary of an eight-year-old girl, Zainab from Kasur, who was a victim of sexual abuse. Zainab was raped and found dead in the heap of trash in Kasur on 9th January 2018.

The parliamentary committee had deferred the bill in August 2019, directed the government to include and rationalize extreme punishment against sexual assault on children

The incident sparked a nationwide uproar. Calls were made and protests erupted across Pakistan to bring the offender to justice.

The case, under heightened public attention, also exposed the deficiencies of the legal and justice system impeding the conviction of pedophiles and rapists.

The bill proposes extreme rigorous punishment for the perpetrators of child sexual abuse rapists; stipulating life imprisonment in child abuse cases from a minimum of 10 years to a maximum of 14 years.

The bill also proposes to take action against the police officer who delays investigations in such cases and failed to respond to alert within two hours.

The bill, approved by National Assembly, is only applicable in Islamabad. But provincial assemblies will have to take up the bill for implementation. The bill, after passed from NA, will be presented in the Senate for approval.

Asad Umar, Federal Minister for Planning, Development, and Reforms, informed that the cases of kidnapping, murder and sexual abuse involving children will be completed within three months.

Today finally after a long long wait the Zainab Alert Bill & ICT Persons with Disabilities Bill were passed by National Assembly. Hoping Senate will pass them on an urgent basis so they become laws. These laws are really needed.— Shireen Mazari (@ShireenMazari1) January 10, 2020

PPP Chairman @BBhuttoZardari Chairman of the Standing Committee for Human rights reccomended Zainab Alert bill moved by @ShireenMazari1. This is how parliament works at its best. Hopefully this law will help prevent incidents of child abuse in Pakistan. Well done! pic.twitter.com/k4p68MILR7

The parliamentary committee had deferred the bill in August 2019, directed the government to include and rationalize extreme punishment against sexual assault on children.

The opposition and government officials equally hailed the approval of the Zainab Alert bill from the National Assembly. Speaker National Assembly, Asad Qaiser, Asad Umar, Faisal Javed Khan, Opposition member, Nafisa Shah congratulated the people of Pakistan for passing the bill that will prove beneficial in protecting children and accelerating the conviction of perpetrators of child abuse.

Thank you National Assembly for passing the much awaited #ZainabAlert bill. It will now be laid in Senate. Then Provincial assemblies to work on the same bill. Much needed – please expedite. It ll pave way for setting up Zainab Alert Response and Recovery Agency. #2020عوام_کا_سال pic.twitter.com/CWA3vesKi7

Sadly, children have become a vulnerable segment in society. Statistics have recorded a surge in heinous crimes against children in the past few years. With the Kasur child abuse scandal of 2015, affecting more than 350 children, the worst incident of child abuse to date in Pakistan.

Was Ambassador Haqqani implementing the policy or making it?

Opposition buoyant as the Panama judgment is reserved