Zardari, Faryal among others in money laundering probe: JIT 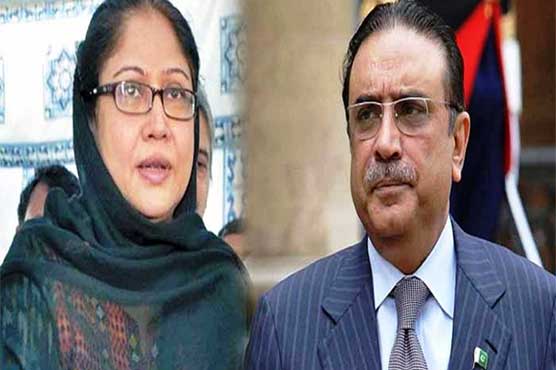 Imran khan in a public meeting in Bisham area of Shangla district on Tuesday, alluded to the anti-corruption proceedings taking place while campaigning for votes.

Interestingly PPP’s earlier petition to have DG FIA replaced was also in correlation to the same case, termed by the FIA as the ‘biggest money-laundering case in Sindh’.

Mentioning the success of the Avenfield trials, he remarked that Nawaz and his daughter expect to return on Friday to hero’s welcome rather than that reserved to corruption convicts. He also added that after ex-PM Nawaz, it was ex-President Asif Ali Zardari’s turn to undergo accountability for corrupt practices, citing the money laundering cases currently propped against the PP leader.

Upon acquiring the mantle of prime minister, the PTI chief pledged to recover taxpayer money looted by previous rulers to be sent to the exchequer and used for the country’s development.

Read more Accountability boards are on fire this month: FIA summons Zardari and…

Earlier on the Supreme Court took its cue from the Federal Investigation Agency (FIA) to summon individuals whose names came up in a Joint Investigation Team (JIT) probe on money laundering, on July 12. The list would include names of presidents and chief executive officers for three banks supposedly involved in dubious transactions totaling Rs35 billion. The apex court also took the precaution of placing said persons on the Exit Control List (ECL) until the investigation is concluded.

According to the ongoing investigation, a total of 29 fictitious accounts have been identified belonging to seven individuals and thirteen beneficiaries, including PPP leader Zardari and his sister, Faryal Talpur. Sixteen of these accounts were registered in Summit Bank, eight in Sindh Bank and five in United Bank Limited.

The investigation which was initiated in 2015, made its first main arrest on July 6, when Stock Exchange of Pakistan chairman Hussain Lawai, and a close assistant of Zardari, was apprehended. The FIA inquiry began when financial surveillance of Pakistan’s State Bank generated a ‘suspicious transaction report’ earlier in January for ten accounts.

FIA sources consider the staggering sum as black money collected from numerous buyoffs, commissions and grafts. Despite such huge sums being transacted, the bank authorities failed to mention any suspicious activity to the security agency.

The apex court also took the precaution of placing said persons on the Exit Control List (ECL) until the investigation is concluded.

Bank managers listed such as Adeel Shah Rashidi of Summit bank admitted to knowingly signing documents to approve accounts with forged signatures. Other accounts were also embezzling funds and laundering money while bank authorities were aware of its alleged links to the Zardari-associated Omni Group.

Rashidi later on also revealed that the mala fide documents had been approved by the corporate department where Taha Raza, former head of Summit Bank’s corporate unit, had directed the account opening with a comment; “referred by Hussain Lawai”.

The brazen act established the existence of fraudulent documents and omission of standardized formalities, said the FIA Director General.  Interestingly PPP’s earlier petition to have DG FIA replaced was also in correlation to the same case, termed by the FIA as the ‘biggest money-laundering case in Sindh’.

In the same vein, PPP issued a statement today linking the allegations and summoning to character assassination in for the upcoming election campaigns against PPP leader Asif Zardari.

PPP leader Saeed Ghani said the accusers are “frustrated at Bilawal Bhutto-Zardari’s popularity,” citing the re-opening of the case as being a consequence of Bilawal’s increasing popularity. Although Bilawal’s popularity is increasing, it is no secret that Asif Ali Zardari whisked away billions in taxpayer money to satisfy selfish ends during his tenure. It is also no secret that he only managed to come to power through sympathy votes garnered after the unpredictable murder of his wife and the people’s candidate Benazir Bhutto. PPP’s party politics within its native Sindh is still centered around feudalism and is steeped in the romanticism of Zulfiqar Ali Bhutto’s legacy of martyrdom.

Corrupt leaders? A tale of bad governance and misuse of authority