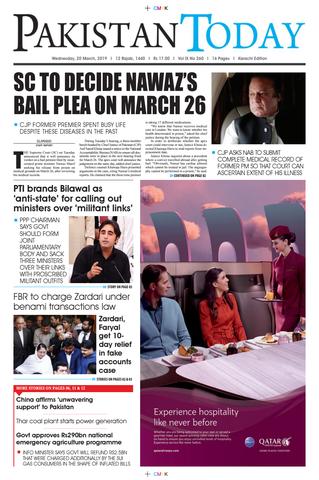 Asif Ali Zardari, former president of Pakistan, said on Monday that the democratic forces are becoming weak in the country ever since the day the Pakistan Tehreek-e-Insaf (PTI) government came to power. According to media reports, while speaking to the media after a meeting with Jamiat Ulema-e-Islam-Fazl (JUI-F) chief Maulana Fazlur Rehman, the Pakistan People’s Party (PPP) Co-chairman said his party has made efforts for the continuity of democracy in the country for the past 10 years and to prevent any incident from happening that could weaken democratic forces.

Maintaining that the PTI government is incapable of handling the country’s affairs, the former president said he will discuss the issue with all political forces.

Pakistan Muslim League Nawaz (PML-N) spokesperson Marriyam Aurangzeb while talking to reporters outside the accountability court on Monday said that incapability of government that Asif Zardari spoke about was agreed upon by the PMLN. About Zardari’s call to unite against the government, Aurangzeb said PMLN would consult among themselves and the opposition before reaching to the decision.

Prior to it, Mr. Zardari has also threatened to topple the sitting government of the PTI. He is of the view that the PTI-led government has failed to maintain rule of law and popular legitimacy since it has lost several by-elections. Meanwhile, Mr. Zardari is facing corruption charges and the NAB is investigating a case against him and his sister. He is accused of money laundering and fake bank account. The SC is monitoring the case.

The government has, on the other hand, made it clear that there is zero tolerance on the matters related to corruption and misuse of authority.

Moreover, like after the general elections, all the political parties (largely known as the status quo) got united against the PTI and decided to bring a joint opposition to make it difficult for the PTI to form a government. But due to some internal issue, the PPP did not agree with the PML-N to file a joint candidate for the slot of Prime Minister. Both parties remained unable to agree on the name of the joint presidential candidate as well.

Interestingly, during the by-elections, the opposition has once against got united to give a tough time to the government. But Prime Minister Imran Khan made it clear during his maiden speech to the nation that whenever powerful and corrupt people will be brought before the law there will be a campaign against the government.

A narrative will also be established as if the democracy was under threat, he added. Similar observations have been made by the information Minister on Tuesday. He maintained that the government is facing and will face more challenges by the political opponents for allowing the NAB to independently conduct inquiries into financial matters of those who have been holding the public offices. As a matter of fact, all these apprehensions expressed by PM Khan are becoming reality as demonstrated by the opposition leaders.

The PTI government is incapable of handling the country’s affairs, the former president said he will discuss the issue with all political forces.

It can be asserted that Mr. Zardari is indirectly threatening the government of a tough and more aggressive opposition if it does not offer an NRO or a deal to the corrupt politicians in the country. Since the NAB is working independently, it is threatening the system developed by such ‘criminals’. The government has, on the other hand, made it clear that there is zero tolerance on the matters related to corruption and misuse of authority.

It is yet to be seen how does the PPP deal with the emerging political situation in the country? But it is clear at this moment that the party has deiced to stand by infamous Maulana Fazal who has even accused Imran Khan of being a Jewish agent.

The statement of Zardari can be seen as the desperate “last stand of the Old Order”. As the PML-N and the PPP once were publicly seen as bitter rivals, in reality, they formed a system that protected their crimes of corruption. With the coming if the PTI to power and the unleashing of NAB, this system seems to be under threat. Thus the bitter words from Asif Ali Zardari.

Previous articleRethinking the education paradigm – Saad Rasool
Next articleDesperate? Indeed, to serve and save the nation! – Javed Hassan

22 June 2021
Previous articleRethinking the education paradigm – Saad Rasool
Next articleDesperate? Indeed, to serve and save the nation! – Javed Hassan