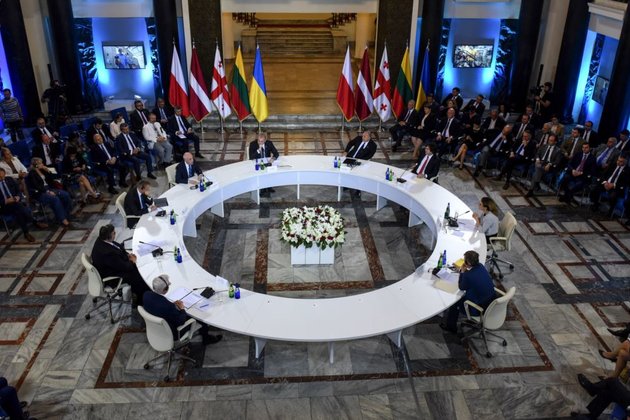 Georgia on Tuesday condemned Russia’s continued “occupation” of its territory, a decade after the two countries went to war over the Kremlin-backed separatist regions of Abkhazia and South Ossetia.

“This is a war against Georgia, an aggression, an occupation, and a blatant violation of international law,” Georgian President Giorgi Margvelashvili told a round table meeting attended by Georgian government officials and visiting foreign ministers of Latvia, Lithuania, Poland, and Ukraine’s vice premier.

“The aggressor’s appetite has only increased after the invasion,” he said. Georgia and its Soviet-era master Russia have long been at loggerheads over Tbilisi’s bid to join the European Union and NATO with the spiralling confrontation culminating in a five-day war in 2008.

Russia and separatist authorities in Abkhazia and South Ossetia have rejected repeated calls from the UN General Assembly for the “safe and dignified return to their homes”.

On August 8, 2008, the Russian army swept into Georgia — bombing targets and occupying large swathes of territory – after Tbilisi launched a large-scale military operation against South Ossetian separatist forces who had been shelling Georgian villages in the region.

Over just five days, Russia defeated Georgia’s small military and the hostilities ended with a ceasefire mediated by France’s then-president Nicolas Sarkozy, who at the time held the European Union’s rotating presidency.

Read more: Who were the Russian journalists killed in the car?

After the war, Moscow recognised South Ossetia and another separatist enclave, Abkhazia, as independent states where it then stationed permanent military bases. Tbilisi and its Western partners condemned the move as an “illegal occupation of Georgian soil” and the first time a sovereign state’s borders were changed in Europe through military force since the end of World War Two.

Speaking to AFP last week, Margvelashvili said that back in 2008, the West believed Russia’s military campaign against Georgia “was an isolated move which will not be repeated against other countries”.

”And then we witnessed what Russia did in Ukraine in 2014,” he added, referring the Kremlin’s support for pro-Moscow rebels in Eastern Ukraine and Russia’s annexation of the Crimean peninsula.

Georgia on Tuesday condemned Russia’s continued “occupation” of its territory, a decade after the two countries went to war over the Kremlin-backed separatist regions of Abkhazia and South Ossetia.

In an interview to the Kommersant daily on Monday, Russian Prime Minister Dmitry Medvedev — who was president in 2008 — defended Moscow’s recognition of the separatist regions as “the only possible step… to maintain durable peace” and “stability in the South Caucasus”.

Read more: The “Orenda Project” on a mission to transform primary education

Smack in the Jaw

In an editorial published on Monday on the website of Russia’s Echo Moskvy radio station, Mikheil Saakashvili — Georgia’s president in 2004-2013 — said Russia had been preparing to invade his country years before the war broke out.

He said Georgia had no chance of winning a war against its giant northern neighbour, but gave “the aggressor a smack in the jaw” when it offered resistance and won “time until the international community woke up.” Russian President Vladimir Putin –- a prime minister during the war — said in 2012 that he approved a plan of military action against Georgia as early is in 2006 and that Russia has “trained South Ossetian militia”.

Earlier on Tuesday, the Georgian foreign ministry denounced Russia’s continued military build-up in the separatist regions. “The Russian Federation has not implemented its international obligations despite constant calls from the international community… and has further reinforced its illegal military presence on the ground,” the ministry said in a statement.

In a statement issued on Tuesday, the EU’s foreign policy chief Federica Mogherini said the “Russian military presence in both Abkhazia and South Ossetia continues to violate international law”. She reiterated Europe’s “firm support of the sovereignty and territorial integrity of Georgia” which she hailed as a “model of democratic stability in the region”.

Joining the chorus of international condemnation, the German foreign ministry called Russia’s recognition of the breakaway Georgian areas Abkhazia and South Ossetia “unacceptable.” The 2008 war claimed the lives of hundreds of soldiers and civilians from both sides. The UN said around 120,000 people were displaced during the war, though most returned to their homes afterwards.

Up to 18,500 ethnic Georgians were forcibly displaced from South Ossetia, according to prosecutors from the International Criminal Court which in 2016 opened an investigation into war crimes committed during the conflict. Russia and separatist authorities in Abkhazia and South Ossetia have rejected repeated calls from the UN General Assembly for the “safe and dignified return to their homes”.

Corrupt Israeli PM to be investigated by police