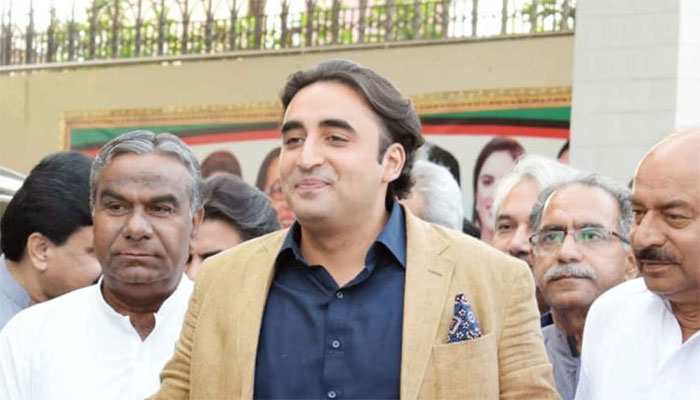 Pakistan People’s Party (PPP) Chairman Bilawal Bhutto Zardari on Sunday insisted there was a “grand plan” in action to force the party to withdraw its support for the 18th Amendment to the Constitution of Pakistan. Speaking to the media, he declared that PPP would never compromise on the 18th Amendment even if his whole family is put in jail.

He said that there was a “grand plan” behind the joint investigation team in the fake accounts case, which aims to force the party to withdraw its support of the 18th Amendment. His statements echo that of his father and PPP President, Asif Ali Zardari who claimed that he became embroiled in the money laundering scandal because the powers that be were unhappy with the 18th Amendment as well as with his party’s victory in the July 25 general elections in Sindh.

PPP and other small groups have been known to use the appeal of ethnic politics in order to stave off accountability efforts.

Meanwhile, Chief Justice Saqib Nisar observed on 3rd of January, that there had been a lack of debate on the 18th Constitutional Amendment before its passage from parliament. He further stated that parliamentary debates were relevant to interpret any constitutional provision; therefore, amendments had been debated in the legislatures all over the world before their enactment.

On January 5, a three-member Supreme Court (SC) bench rejected NICVD Representative Senator Raza Rabbani’s request seeking a full bench in the case.  The request for a full bench came after the comment by Chief Justice of Pakistan (CJP) Mian Saqib Nisar over the matter of debate over the 18th amendment. However, during Friday’s hearing, Justice Ijazul Ahsan clarified the court was not reviewing the 18th Amendment, but the issue pertaining to the dissolution of certain hospitals on the basis of the amendment.

There has been a continuous debate on the national media over the 18th amendment revolving around these two events. This has led to the generation of a narrative that the present PTI government or the much-maligned “establishment” wants to do away with the provincial autonomy given by the 18th amendment in order to take down the PPP. However, it can be asserted that much of this has no basis in facts on the ground.

Speaking to the media, he declared that PPP would never compromise on the 18th Amendment even if his whole family is put in jail.

Much of the narrative is generated by the discussion over the 18th amendment in the Supreme Court which is often exploited by the PPP and its allies. However, a close examination reveals that the real issue of the petition pertains to the devolution of certain institutions from Federal control to the provinces. The petition had been filed by employees of the Jinnah Postgraduate Medical Centre (JPMC) that challenged the devolution of the federal government-run hospitals to the province in 2011.

However, the Sindh government appealed against the decision in the Supreme Court the same year. The Supreme Court suspended the Sindh High Court judgment declaring the devolution of three prestigious healthcare institutions. It is noteworthy that from its inception since 2011, the case received scant public attention from the PPP until the recent startling JIT report implicating Asif Ali Zardari and most of the Sindh government in money laundering.

Justice Ijazul Ahsan clarified the court was not reviewing the 18th Amendment, but the issue pertaining to the dissolution of certain hospitals on the basis of the amendment.

A joint investigation team (JIT) report submitted in the Supreme Court has held the Zardari and Omni groups responsible in the mega money laundering and fake accounts case. A two-judge bench headed by Chief Justice of Pakistan Justice Mian Saqib Nisar heard the suo motu case at the apex court’s Lahore registry and issued a notice to the PPP co-chairperson Asif Zardari. The court also imposed a ban on the sale and purchase of Zardari and Omni groups’ properties.

During the hearing, the chief justice remarked that expenses of the Zardari and Bilawal house were paid through companies operating fake bank accounts. The PPP leadership has challenged the case only until after the launch of anti-corruption cases against its top leadership. It is interesting to note that the 18th amendment and by default, provincial autonomy came only under “threat” after Zardari and his sister were implicated in money laundering.

To many, it seems that the PPP is using the time-tested tactic of sub-nationalism to save itself and blackmail the forces of accountability. PPP and other small groups have been known to use the appeal of ethnic politics in order to stave off accountability efforts. In this case, the PPP is trying to combine provincial autonomy with the bogey of “non-democratic forces” out to sabotage democracy. This fits it into its narrative that the current government is a stooge of the establishment and is out to impose a one-party system on the entire nation.

Much of the media took off on this case with talk shows filled to the brim with debates based on rumours about rolling back the 18th amendment and the formation of forward blocks in the Centre and Sindh. Some were counting the days of the Sindh as well as the Federal government. This all goes to show that the gambit of the PPP paid off as it turned the accountability process into a controversial issue about the role of democracy and provincial autonomy.

Previous articlePakistan Army inducts A-100 rockets in its arsenal
Next articleBaluchistan and Sindh should cut FATA some slack: Taimur Jhagra

23 July 2021
Previous articlePakistan Army inducts A-100 rockets in its arsenal
Next articleBaluchistan and Sindh should cut FATA some slack: Taimur Jhagra

Will the Federal Government take control of three Karachi hospitals?