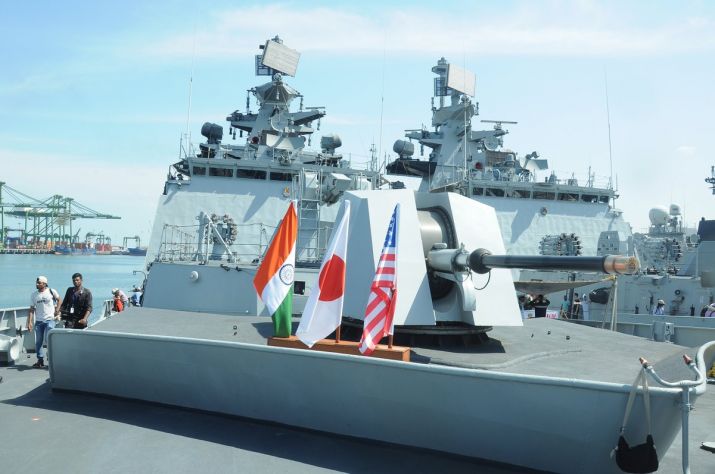 The steady transformation in the global politics has been causing new strategic alliances or partnerships formation. The materialization of new partnerships is advantageous for many regional actors and alarming for the smaller states, particularly in Asia. The Great Powers strategic competition would not only make Pakistan’s strategic environment vulnerable but also drags it into their strategic theater.

Read more: Hotline between India and USA will continue under Trump

An emerging alliance between the US and India

Hence, the United States and its like-minded states’ perceptions about India—a natural partner—are not ignorable in the prevalent regional and global politics. The United States and Japan constituted strategic partnership with India. Indeed, this strategic partnership is to check China’s increasing clout in the global affairs, particularly in Asia-Pacific. China’s assertiveness in the South China Sea is a nuisance for the United States and its South East Asian allies. Moreover, its increasing naval presence throughout the Indian Ocean irritates India that regarded the Indian Ocean as part of its immediate sphere of influence.

Washington and Tokyo encourage New Delhi’s Indo-Pacific strategy. They are confident about India’s potential to balance or check China. India’s is equally determined to materialize Indo-US strategic partnership for the pursuit of its regional and global agenda. This facilitates India in purchasing modern military equipment and transfer of technology from the United States. Moreover, Washington supports unconditionally New Delhi at the international forums against Pakistan. It also endorses India’s Great Power ambitions in South Asia, Indian Ocean and beyond.

The complexity in the Indian Ocean strategic environment has gradually been multiplying since the announcement of New Delhi’s Indo-Pacific strategy. The United States affirmed India’s attempt to build blue water Navy and broaden its maritime sphere. The increasing Indian Naval capability is attractive for the Americans, Japanese, Singaporeans, Australians, etc. They are determined to facilitate India’s endeavor to emerge as Great Power to balance China’s increasing strategic significance in Asia.

Recently, the United States and Japan reiterated India as a natural partner. On July 10, 2017, the United States, Japan, and India launched a tri-nation Malabar exercise in the Bay of Bengal. In the Exercise, the US Navy’s largest nuclear-powered aircraft carrier—USS Nimitz, the Indian Navy’s solitary aircraft carrier INS Vikramaditya and Japan Izumo-class helicopter carrier participated. They deployed front-line warships, submarines, and aircraft as part of the maritime exercise.

The US Navy spokesperson stated: “As members of Indo-Asia-Pacific nations, our maritime forces are natural partners, and we look forward to continuing to strengthen our bonds and personal relationships.” Certainly, United States, Japan, and India maritime forces cooperation is advantageous for their national interests, but disturbing for the other Indo-Pacific littoral states.

Malabar 2017 is aimed at achieving deeper military ties between the three nations. A noteworthy feature of the exercise is the inclusion (first time) of aircraft carriers from all three navies. It was ‘conducted ashore and at-sea.

Malabar naval exercise was conceived in 1992 and formally started as a bilateral exercise between India and United States in 1994. Japan joined it as a permanent partner in 2015. Australia and Singapore had also taken part in previous editions of the exercise. The continuity and broadening of the horizon of Malabar naval exercise reassure India about the US and its like-minded states commitment in working with it to reshape the Asian security environment in general and contain China in particular.

Malabar 2017 is aimed at achieving deeper military ties between the three nations. A noteworthy feature of the exercise is the inclusion (first time) of aircraft carriers from all three navies. It was ‘conducted ashore and at-sea. The ashore training included “exchanges on carrier strike group operations, maritime patrol and reconnaissance operations, surface and anti-submarine warfare, explosive ordnance disposal and visit, board, search and seizure (VBSS) operations. And at-sea portions covered “professional exchanges and embarks, submarine familiarization, air defense exercises, surface warfare drills, anti-submarine warfare, gunnery exercises and VBSS operations.” It was reported (CNN, July 11, 2017) that the current Malabar exercise is ‘the largest naval exercise the region has seen in more than two decades’. It involves 16 ships, two submarines, and more than 95 aircraft.

Importantly, India has already embarked on its mission to contain China to demonstrate that it is a natural partner of the United States. The former rejected latter’s One Belt, One Road initiative. New Delhi invited Dalai Lama to disputed Arunachal Pradesh/south Tibet. It also blocked Chinese road construction on Chinese territory along the Bhutan-China border. India had attempted to bully Pakistan, especially after failing to tame the current uprising in Kashmir. It has also been struggling to obstruct China-Pakistan Economic Corridor project.