4 dangerous weapons Pakistan would use against India if war erupts

Pakistan has studied India for 70 years. It is prepared to defend itself against 5 times bigger India. If war erupts Pakistan can easily beat the enemy. Here are 4 Pakistani weapons India is afraid of. 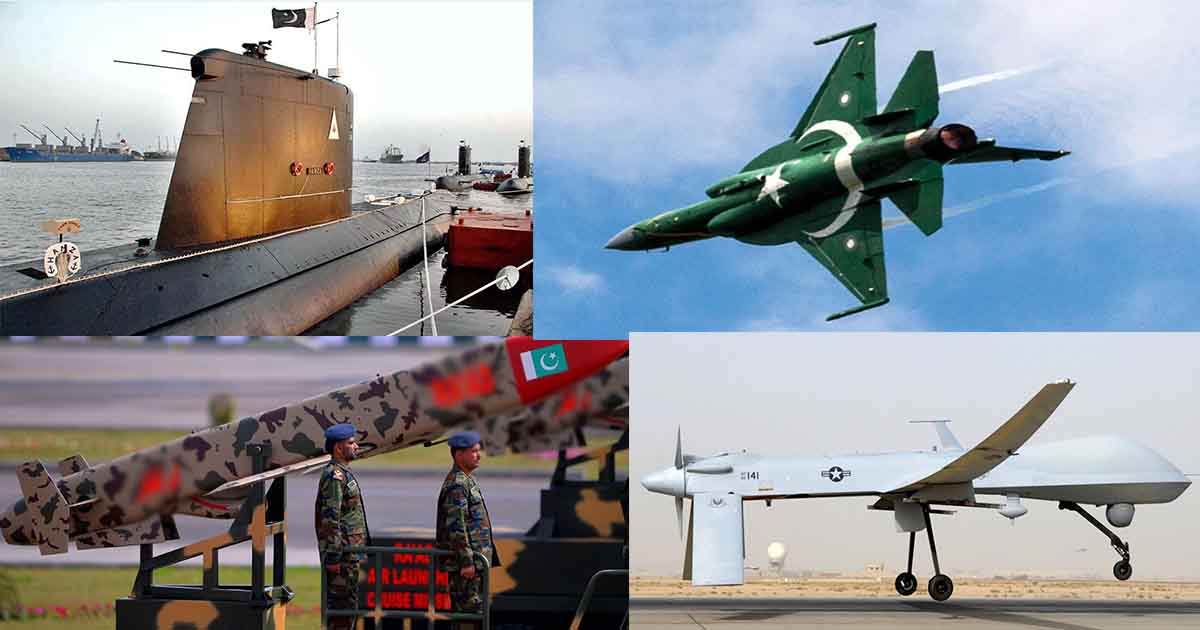 Pakistan developed animosity with larger, stronger India as soon as sub-continent was partitioned in 1947.

Pakistan has invested in nuclear weapons as an inexpensive way to assure territorial integrity. Invading Pakistan means destruction and one of the surest ways to a nuclear war. So it can be easily said that Pakistan’s nuclear program is successful.

Pakistan is a machiavellin state. It practices a brutal form of realpolitik that involves constantly playing one party against another. It succesfully distracts all parties from Pakistan’s own weakness. In support of such a policy it has evolved a wide spectrum of destructive tools. All of these tools are arrayed against India.

These are five of the most dangerous weapons India could face if it attempts to attack Pakistan.

JF-17 Thunder is a low-cost, single-engine multirole fighter, jointly designed by the Chengdu Aircraft Industry Group and the Pakistan Aeronautical Complex. Pakistan has built more than two hundred JF-17s. It is a significant upgrade over the existing Mirage III, Mirage V, and Chengdu F-7 fighters.

The JF-17 has five weapons hardpoints that can carry a total of 8,000 pounds of fuel, equipment or munitions. Air-to-air weapons are supplied by China, with PL-5 and PL-9 short-range infrared missiles occupying the two wingtip hardpoints.

For beyond visual-range engagements, the JF-17 would be equipped with the Chinese PL-12 active-radar homing missile. Air-to-ground weapons are less well known but would likely include various forms of unguided “dumb” bombs, laser-guided bombs, rocket pods, precision-guided missiles and anti-ship missiles.

Pakistan’s most effective naval assets against India are its three Khalid-class diesel electric attack submarines. If Indian Navy attempts to impose a blockade on Karachi and other ports, these submarines alone could practice an “anti-access, area-denial” (A2/AD) strategy of their own against it.

Today is 48th 'Hangor'day. Hangor was a Pak submarine that sank Indian Navy Ship 'Khukri' in 1971. We salute the courage & skills of the crew & of Pakistan Navy.This heroic action is the only incident in Naval history of a successful kill by a 'conventional submarine' since WWII. pic.twitter.com/7SmNdjTNXF

The three Khalid-class submarines are modernized versions of the French Agosta-class diesel electric submarines. Khalid, Saad and Hamza are relatively small, weighing in at 2,050 tons submerged. The Khalid class can make 12 knots surfaced and just over 20 knots submerged. All three submarines difficult to detect because of their air independent propulsion system, allowing them to stay submerged for greater periods.

Read more: Pak Navy keeps its submarine a SECRET! But why?!

The Khalid class is armed with four 533mm standard diameter torpedo tubes. The torpedo tubes can be used to launch French-made ECAN F17 Mod 2 wire-guided torpedoes. Capable of both active and passive homing, the F17 Mod 2 can deliver a 250kg warhead up to 20 kilometers. The submarines can strike targets with the famous Exocet anti-ship missile at longer range. SM39, the submerged version of Exocet, has a range of up to 50 kilometers and a high explosive warhead of 165 kilograms.

In 1998, Pakistan shocked the world by simultaneously detonating multiple nuclear devices that ranged in yield from sub-kiloton to up to a possible 36 kilotons.

The number of nuclear weapons Pakistan is estimated to be between 130 and 140. Pakistani nukes have two delivery systems: aircraft bombs and ballistic missiles. Early model Pakistani F-16 fighter-bombers were probably designated in the late 1990s to carry nuclear gravity bombs. From Pakistan’s F-16 base at Sargodha, a nuclear armed F-16A can go as far as center of India.

Read more: Why Pakistan has the most feared nuclear weapons program in the world

Pakistan possesses short-range tactical ballistic missiles, the Ghaznavi, Shaheen, Abdali and Nasr missiles. For longer range strikes Pakistan has an unknown number of Ghauri-2 missiles, an intermediate range ballistic missile based on the North Korean Nodong missile. Not much is known about the Ghauri-2, which was first deployed in the 1990s. A liquid fueled, road mobile, single stage missile with a range of approximately 2,000 kilometers, it theoretically has the ability to hit eighty percent of India. An intermediate range ballistic missile, Shaheen-2, is solid-fueled and reportedly has a range of 2,000 kilometers.

The Shaheen 3 missile is a two-stage, solid-fueled medium-range ballistic missile in development by Pakistan. The missile is reportedly capable of carrying both nuclear and conventional payloads to a range of 2,750 km, which would make it the longest range missile in Pakistan’s strategic arsenal.

India would fear the Pakistani drones because they are the ideal complement to small armed groups.

We also produce Tanks and APCS in Heavy industry Taxila we produce our own UAVS for example armed Burraq drone. Pakistan air force is the only air force in world which produce Fighter jets by its own. pic.twitter.com/9dwMacrnPx

Since 2008, Pakistan has fielded two small unmanned aerial vehicles for tactical reconnaissance, the Shahpar and Uqab. Although drones have legitimate battlefield uses, the thought of Pakistan possessing drones spurs thoughts of more nefarious purposes than providing reconnaissance and security for Pakistani troops.

The smaller of the two drones, Uqab, is described by Pakistani defense contractor Global Industrial Defence Solution (GIDS) as a “tactical UAV system which can be used for battlefield damage assessment, aerial reconnaissance, artillery fire correction, search and rescue, route monitoring, flood relief operations” and so on.

Uqab has a range of 150 kilometers and an endurance of six hours. A twin-tailed design with a single push turboprop engine, Uqab is capable of speeds of up to 120 to 150 kilometers an hour. Navigating by GPS, Uqab has both a full color real-time camera and a thermal imager camera.

The Shahpar drone, also made by GIDS, is slightly larger and faster, about 15% bigger and capable of speeds up to 150 kilometers per hour. Some effort has been put into reducing the Shahpar’s radar signature, although with a large push propeller attached to the rear of the drone that may be a forlorn hope. Endurance is increased to 7 hours, and the data link can transmit real-time video up to 250 kilometers. Shahpar is capable of autonomous takeoff, flying and landing, utilizing GPS.

Pakistani Rangers can send Shahpar and Uqab to stir up trouble at a border outpost or in a large city. Drone surveillance could be used to reconnoiter objectives, screen flanks and provide security, and provide real-time intelligence. The Shahpar, capable of carrying payloads of up to 50 kilograms, could likely even be used to covertly deliver cargo