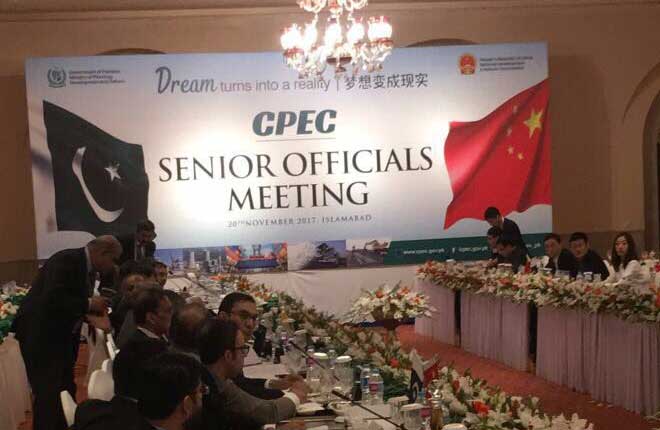 China and Pakistan have been working to promote the construction of the CPEC project through the sustenance of a Joint Cooperation Committee (JCC). According to the available information on the official websites of CPEC, there are five working groups, which include long-term planning, energy, transportation infrastructure, industrial cooperation and Gwadar Port. JCC deals with the overall planning and coordination while the above mentioned working groups are responsible for the detailed planning and implementation of the projects under CPEC.

Since August 2013, seven JCC meetings have been held to review the progress on CPEC. The first ever meeting of JCC on CPEC was held in Islamabad on August 28th, 2013, which symbolized the joint efforts of both countries to promote the implementation of the relevant work on the key areas of infrastructure, energy and investment. The summary for the long term planning of the CPEC project was prepared on the basis of mutual understandings of both countries.

The 7th JCC meeting has further deepened mutual cooperation between the two countries under the framework of CPEC and paves a clear way for Pakistan to enter the phase of industrial cooperation.

This meeting also reviewed the reports presented by the joint working groups on five key areas. The fifth meeting was held in Pakistan on 10-12th November 2015. In this meeting it was concluded that the construction of Diamer-Bhasha Dam should be included along with the accorded approval of the coal-based power plants to be built at the Thar Desert in Sindh province to enhance the capacity from 660-2600 MW.

The 6th JCC meeting was held in Beijing on December 29th 2016 in which several new projects were signed. Each province was set to get an industrial zone. It was concluded on a pleasing note to speed up the development of the existing projects. Important decisions taken during this meeting include that a 1320 MW power plant will be completed in Sahiwal in 2017.

The continuity of the meetings of Joint Cooperation Committee since 2013 to November 2017 shows the evaluation and the progress of work on the ongoing projects under CPEC.

The most recent 7th JCC meeting on CPEC was held on November 20th 2017 in Islamabad. The key points of this meeting included the signing of much debated CPEC Long Term Plan (LTP) 2014-2030 which includes collaboration in areas of industrial cooperation, agriculture, tourism and financial cooperation. It has attempted to formalize the future roadmap for industrial and economic collaboration involving special economic zones along the CPEC stretch in Pakistan and adopt a Long Term Plan (LTP) 2030.

It has been inferred that the main focus of the seventh JCC meeting remained on the special economic/industrial zones  while the five joint working groups (JWGs) met earlier on the November 20th 2017 to remove any irritant and suggested the five ways on the projects pertaining to — Gwadar, energy, transport infrastructure, special economic zones.  Pakistan’s primary objective is to enhance its industrial capacity from assembling imported parts to local production of goods and encouraging China’s enterprises to invest in the Pakistani market to improve the energy efficient appliance industry.

Moreover, Khyber-Pakhtunkhwa in this meeting raised its preference for Rashakai industrial estate over Hattar in unequivocal terms and China has agreed to the provincial right of site selection for industrial estates. Furthermore, since China’s proposed financial structure regarding Diamer-Bhasha Dam was not approved by Pakistan yet, it provides the two sides with an opportunity to generate a debate for the future development of this project.

In this backdrop, the harmony between the provincial and federal governments is required and they should work enthusiastically for the inclusion of more projects under CPEC and to complete the ongoing projects.

There was also an ample discussion on the railway projects, Gwadar International Airport, energy projects and industrial estates, already included in the CPEC with the focus on the implementation of the existing projects and the finalization of the feasibility reports of these projects. Under the road map, the Chinese side would start investing in the nine Special Economic Zones directly after JCC’s clearance to avail benefits of tax exemption.

The cabinet committee on the CPEC presided over by Prime Minister Shahid Khaqan Abbasi has already cleared the proposals for the fresh projects and nine SEZs. This will offer 15- to 20-year tax exemption to China in case investment is made before 2020.

In a nutshell, the chronological order of the seven JCC meetings show that there are following the projects which Pakistan has been pursuing in the last seven meetings of JCC which include Diamer-Bhasha dam, the Main Line 1 (ML1is considered as the logistic backbone of this corridor) up gradation of the Peshawar to Karachi railway line, the Karachi Circular Railway, and three road projects (which include KKH (remaining portion), D.I.Khan to Zhob and Khuzdar to Basima, Completing feasibility and other formalities of Gilgit—Shandur—Chitral—Chakdara and Naukundi—Mashkhel—Panjgaur roads coincided with 7th JCC).

Gwadar International Airport, energy projects and industrial estates, already included in the CPEC with the focus on the implementation of the existing projects and the finalization of the feasibility reports of these projects.

The approval of the project ML1 is awaiting the cost estimates, which would be generated within the coming three months. Federal Minister Ahsan Iqbal said that the Long Term Plan would be made public on 18th of December 2017, which would further add the prospects for more inclusive research of this mega project.  Simultaneously there are bright prospects to jack up the developments in various sectors that include agriculture and information technology.

This demonstrates the success of this meeting and the willingness of China to diversify its cooperation under the CPEC project. In this backdrop, the harmony between the provincial and federal governments is required and they should work enthusiastically for the inclusion of more projects under CPEC and to complete the ongoing projects.

It can be hoped that the end result would be productive and the project will be able to proceed. The continuity of the meetings of Joint Cooperation Committee since 2013 to November 2017 shows the evaluation and the progress of work on the ongoing projects under CPEC. The 7th JCC meeting has further deepened mutual cooperation between the two countries under the framework of CPEC and paves a clear way for Pakistan to enter the phase of industrial cooperation.

Asia Maqsood is Research Associate at Strategic Vision Institute Islamabad. She has done M. Phil in Defence and Strategic Studies from Quaid-Azam University Islamabad. She works on China Pakistan Economic Corridor and South Asia’s Regional issues. The views expressed in this article are authors own and do not necessarily reflect the editorial policy of Global Village Space.

Previous articlePakistan and Russia closing in on better trade ties
Next articleWhy has Nepal banned solo travellers from climbing Everest?

India, Pakistan agree to repatriate prisoners above 70 years of age