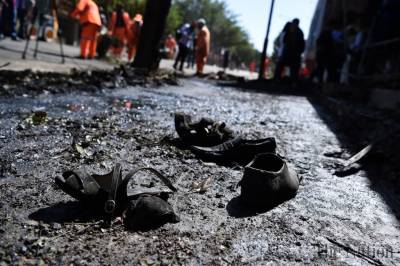 An election candidate was among eight killed in a suicide attack in Afghanistan on Tuesday, officials said, days ahead of a parliamentary vote that militants have vowed to disrupt.

Another 11 people were wounded when the attacker blew himself up inside Saleh Mohammad Asikzai’s campaign office in the southern city of Lashkar Gah, Helmand provincial governor spokesman Omar Zhwak told AFP.

Violence had been expected to escalate ahead of the poll, which more than 2,500 candidates are contesting.

Asikzai, a young first-time candidate, was campaigning on a platform of “positive change”.

There was no immediate claim of responsibility for the attack. Helmand has long been a stronghold for the Taliban, which was toppled from power in a US-led invasion in 2001.

President Ashraf Ghani condemned the attack and said Afghans who believed in democracy would not allow “terrorists” to stop the elections.

It is not clear how many people were inside the room at the time of the blast, which comes a day after the Taliban warned candidates to pull out of the “bogus” election scheduled for October 20.

Describing the polls as a “malicious American conspiracy” and urging voters to boycott them, Taliban spokesman Zabihullah Mujahid said the militants would pull no punches to disrupt the ballot. It was the second suicide attack to target a parliamentary candidate since campaigning officially kicked off on September 28.

But there are concerns over how they will manage as the Taliban and IS step up attacks across the country.

An attack on a rally in the eastern province of Nangarhar on October 2 killed 13 people and wounded more than 40. The Islamic State group claimed the attack, which the candidate survived. Violence had been expected to escalate ahead of the poll, which more than 2,500 candidates are contesting.

Tuesday’s attack takes the number of candidates murdered in targeted killings to at least six. Hundreds of civilians also have been killed or wounded in poll-related violence in recent months.

Preparations for the ballot, which it is a test run for next year’s presidential vote, have been in turmoil for months and there has been a debate about whether the vote should go ahead.

Bureaucratic inefficiency, allegations of industrial-scale fraud and an eleventh-hour pledge for biometric verification of voters threaten to derail the process, which is three years late.

Some 54,000 members of Afghanistan’s beleaguered security forces will be responsible for protecting more than 5,000 polling centers on election day. But there are concerns over how they will manage as the Taliban and IS step up attacks across the country.

In other violence, “hundreds” of Taliban fighters stormed a military post in the northern province of Jowzjan on Monday, provincial police chief Faqir Mohammad Jawzjani told AFP. At least 12 soldiers and 30 Taliban fighters were killed in the attack, he said.

Trump-Kim creations on the menu as Singapore chefs mark summit