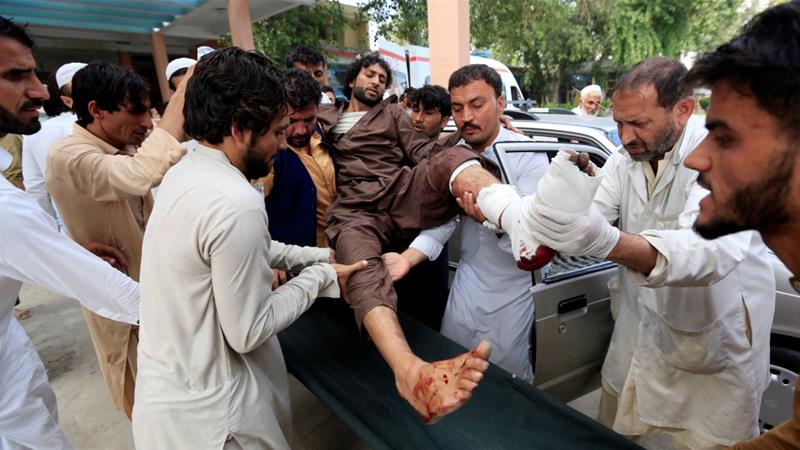 A suicide attack on a political rally in eastern Afghanistan killed at least 13 people on Tuesday, officials said, as the country braces for an escalation in violence ahead of this month’s parliamentary election. The attack is the first suicide assault since campaigning officially began last Friday for the long-delayed ballot, preparations for which have already been marred by dozens of bloody attacks.

More than 40 people were wounded, some of them critically, when the militant blew himself up among supporters of candidate Abdul Nasir Mohmmand in Nangarhar province, provincial governor spokesman Ataullah Khogyani said.

Mohmmand survived the attack, Khogyani confirmed, but he did not say if the candidate had been hurt. Provincial health director Najibullah Kamawal put the death toll slightly higher at 14.

The international community is pushing hard for the vote to happen before November’s ministerial meeting in Geneva, which the United Nations says is a “crucial moment” for the Afghan government and its foreign partners to demonstrate progress.

The Islamic State group claimed responsibility for the attack, the US-based SITE intelligence group reported, citing a statement released by the militants.  An AFP reporter saw numerous ambulances delivering bodies and wounded people to a hospital in the provincial capital of Jalalabad.

Sayed Humayun, who had brought his injured cousin to the medical facility, said scores of people had been inside a hall listening to campaign speeches when the bomber struck. “I heard a big explosion,” Humayun told AFP.

“For a while I could not see, I thought I was blinded, but later I saw I was surrounded by bodies and people covered in blood.” The force of the blast caused the ceiling to collapse on top of the gathering.

“There are still people trapped under the rubble,” Malik Zeerak, who was at the rally, told AFP. Siraj ur Rehman, whose leg was hurt in the blast, said Mohmmand had begun addressing his supporters when he heard “a big bang from the middle of the room”.

Violence has plagued the run-up to Afghanistan’s parliamentary vote, which is scheduled for October 20 — more than three years after it was supposed to be held.

Five candidates have been murdered in targeted killings, according to the Independent Election Commission, and hundreds of civilians have been killed or wounded in poll-related violence.

Mohmmand survived the attack, Khogyani confirmed, but he did not say if the candidate had been hurt. Provincial health director Najibullah Kamawal put the death toll slightly higher at 14.

The latest attack comes amid predictions that Afghan battle deaths will top 20,000 this year — including civilians and combatants. That would be the highest number since the start of the conflict in 2001 and potentially make Afghanistan deadlier than Syria.

More than 2,500 candidates will contest the vote, which is seen as a test run for next year’s presidential election. But preparations have been in turmoil for months. Bureaucratic inefficiency, allegations of industrial-scale fraud and an eleventh-hour pledge for biometric verification of voters threaten to derail the election and any hope of a credible result.

The international community is pushing hard for the vote to happen before November’s ministerial meeting in Geneva, which the United Nations says is a “crucial moment” for the Afghan government and its foreign partners to demonstrate progress.

But it is a daunting task as the Taliban and IS, which have vowed to disrupt the ballot, ramp up attacks across the country. Some 54,000 members of Afghanistan’s beleaguered security forces will be responsible for protecting more than 5,000 polling centres on election day.

More than 2,000 polling centres that were supposed to open will be closed for security reasons.