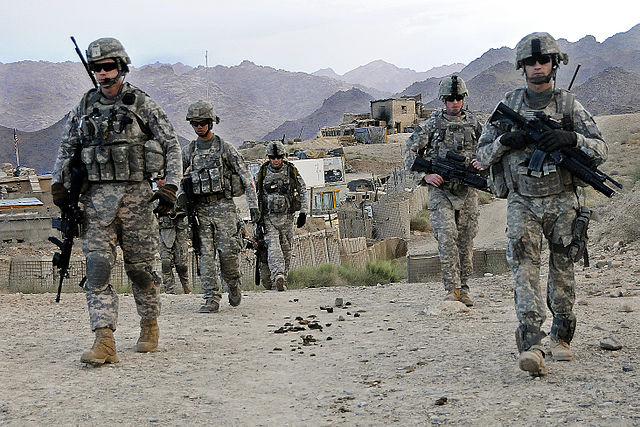 How can we explain Donald Trump’s decision to withdraw part of the U.S. force currently in Afghanistan, at a time when U.S. officials are attempting to facilitate negotiations between the Taliban and the Afghan government? Perhaps there is no explanation, as reports of the withdrawal came as a surprise to all the Afghan war’s major players—including the U.S. Special Representative for Afghanistan Reconciliation.

Earlier this month, Zalmay Khalilzad said in an interview with Afghanistan’s popular TV station, Tolo News, that the United States will not tolerate a repeat of the human rights abuses of the Taliban era. He expressed optimism about the prospect of talks between the Taliban and the Afghan government and insisted that the United States will stand by Kabul should the peace talks fail. “I explicitly told this to the Taliban team in Abu Dhabi,” he went on to say.

The fall of Najibullah’s government was accelerated in major part due to the total loss of Soviet financial assistance.

That was only hours before reports began to emerge that the Trump administration was planning to pull half of its remaining troops in Afghanistan, about 7,000, out of the country. The Taliban expressed optimism about the announcement, stating that the departure of U.S. troops could help the peace process because it could “lead to trust building that the U.S. wants a political solution.”

Read more: Repercussions of US withdrawal from Afghanistan

Afghanistan’s Neighbors After a U.S. Withdrawal

Pakistan: The Taliban is not a homogenous and organized group, and therefore it may not be accurate to assume that most of its factions are influenced by or being used as puppets of Pakistan. There is no reason to expect the government of Pakistani Prime Minister Imran Khan to reverse the Pakistani military’s long-standing use of proxies like the Afghan Taliban. But if he were to steer Taliban factions that do listen to Pakistan toward a settlement with Kabul, even in the absence of U.S. forces, Khan could prove that his government is not run by the military or Pakistan’s Inter-Services Intelligence (ISI) organization. This would be, understandably, a very difficult task for the PM, but Khan’s credibility is at risk. He gained some good PR due to his government’s recent efforts in bringing the Taliban to the negotiating table. It’s time to work on repairing Pakistan’s image in the world.

China: Beijing stands to lose less than Afghanistan’s South Asian neighbors in the event that the Taliban returns to power, due to the steady links they have established with the Taliban. China has hosted numerous Taliban commanders throughout the years and has invested in Afghanistan’s mining industries and other fields. Afghan markets are filled with Chinese goods, so China’s presence will be untouched by the Taliban’s return, as long as it does not lead to a civil war.

Iran: For the Iranian government, the U.S. withdrawal will come both as a relief and source of concern. It will mean that Afghanistan cannot be used as a base from which the U.S. could attack Iran. However, it will also mean new challenges for Iran if weakened Afghan government forces are no longer able to keep IS-Khorasan Province (IS-K) from its doorstep. After Iran’s then-archenemy, the Taliban regime, was ousted from power in 2001, Tehran helped in the formation of the interim post-Taliban government. It brought together warlords who were at odds with each other at the Afghanistan reconstruction conference in Bonn. It asked Gulbuddin Hekmatyar, an Afghan warlord who had lived in exile in Iran for several years, to leave the country due to Hekmatyar’s opposition to the United States.

The Taliban is not a homogenous and organized group, and therefore it may not be accurate to assume that most of its factions are influenced by or being used as puppets of Pakistan.

Things changed with President George W. Bush’s “Axis of Evil” remarks in his State of the Union address in January 2002. Iran felt betrayed and misused. It then began developing contacts with the Taliban and providing the insurgents with improvised explosive devices (IEDs). The relationship between Iran and the Taliban was not systematic, like that of Taliban and ISI or the Pakistani military. But the Iranians saw value in working with the Taliban to destabilize the U.S. occupation—again, due to fears that the U.S. might use Afghanistan as a base from which to attack Iran.

Then Afghanistan saw the rise of IS-K, a group several times more brutal and violent than the Taliban. Iran was attacked by bombings believed to have been conducted by this group and supported by Iran’s Arab rivals. Having no confidence in the Afghan government to defeat IS-K and suspecting that the group would be used to destabilize Iran, Tehran turned to the Taliban. Iran’s national security requires a strong Afghan government, albeit one that does not increase the threat of a military attack from the U.S. In the absence of a strong Afghan government and faced with the threat of IS-K, the Iranians felt they needed to ally with the Taliban.

Read more: Only solution to Afghan problem: US Withdrawal

According to Ali Shamkhani, the Secretary of Iran’s Supreme National Security Council (SNSC), all contacts with the Taliban “have taken place with the knowledge of the Afghan government.” Other concerns for Iran in trying to stay engaged with Afghanistan’s development include the two countries’ shared transboundary waters, especially the Helmand and Harir Rivers. The flow and the level of these waters have been influenced by political developments in Afghanistan.

India: The Indian government will without doubt not be happy about the U.S. withdrawal. India has broad investments in Afghanistan and is involved in joint projects with Iran and Afghanistan, notably at Iran’s ocean port of Chabahar. Afghans have far more positive views of India, than of any other neighboring country. But India may have made a huge mistake in failing to develop ties with the Taliban, the way China and Iran have done.

Could History Be Repeated?

On May 15, 1988, Soviet forces started leaving Afghanistan in compliance with the Geneva Accord signed in April of the same year by the Soviet Union, Afghanistan, the United States, and Pakistan. Within 10 months, all Soviet troops had left Afghanistan. The government of Muhammed Najibullah Ahmadzai could hold on to power, at least in Kabul, until the spring of 1992, three years after the Soviets left. That was in major part due to billions of dollars in Soviet financial and military aid to Najibullah’s government, much of it in the form of aircraft and missiles.

After Iran’s then-archenemy, the Taliban regime, was ousted from power in 2001, Tehran helped in the formation of the interim post-Taliban government.

Within weeks after Najibullah was ousted from power, war broke out among multiple factions and a civil war kicked off that involved six fighting groups. By the end of 1992, thousands of Afghans had been killed and hundreds of thousands of Kabul residents fled their homes. In November 1994, the Taliban, a new Islamic fundamentalist group, emerged, and by September of 1996 had occupied Kabul. In 1998 they took Mazar and Bamiyan and the rest of the country and ruled until 2001 when they were ousted by the United States.

The concerns of those opposing Trump’s decision to withdraw U.S. forces from Afghanistan include factors such as the possibility that the withdrawal may embolden the Taliban to reject any peace talks with the Afghan government. Trump’s aim of leaving Afghanistan may not have been a surprise, as he frequently talked about doing so during his 2016 presidential campaign. The timing of the withdrawal, however, was.

It must be said that a drawdown in the U.S. military presence in Afghanistan—even one this large—may not necessarily translate into the Taliban taking over the country. Obviously the over 17 year long presence of U.S. forces has not been able to end the conflict. U.S. and coalition forces have tried different tactics in dealing with the insurgency, increasing and reducing their presence in Afghanistan several times along the way. The truth is that military might alone has not been able to bring the Taliban to the negotiating table.

One of the major differences between the Afghan government now and during the last communist regime is that back then the government in Kabul was opposed by all, except the Soviet Union. Now, no one desires the Taliban back in power and the Afghan government, despite all its shortcomings, is supported by the international community. The fall of Najibullah’s government was accelerated in major part due to the total loss of Soviet financial assistance. It’s hardly imaginable that the international community would completely cut aid to Kabul today.

The Trump administration has sent conflicting messages regarding Afghanistan in the past. Pulling troops out of Afghanistan could be another one, and this decision could be subject to change. As the Taliban may have figured out by now, one element of this administration’s policy-making overshadows everything else: its unpredictability.

Fatemeh Aman is a nonresident fellow in the Atlantic Council’s South Asia Center. Twitter @FatemehAman. The views expressed in this article are author’s own and do not necessarily reflect the editorial policy of Global Village Space.

Another win for Russian diplomacy: Taliban accept the invitation to attend talks in Moscow