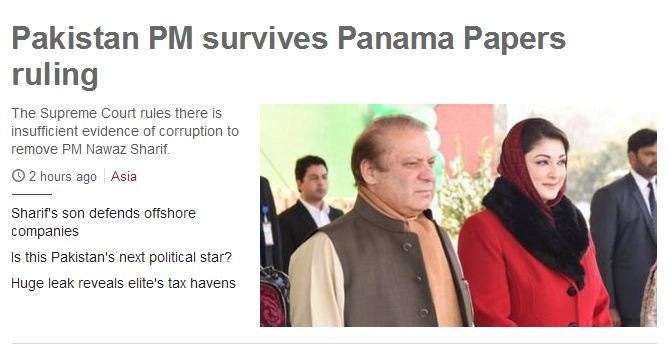 Finally, the hype is over, Supreme Court Of Pakistan (SC) delivered its ‘historic’ judgment. Prime Minister Nawaz Sharif, accused of alleged money laundering, is not disqualified but will face Joint Investigation Team (JIT) to vindicate himself and his family from the allegations.

Logically the family of Prime Minister and PML(N) leadership should be worried since PM Nawaz has now officially become an ”accused” in the Panama case. However, when the decision by the Apex Court came, PML (N) leaders and workers started distributing sweets and cheered the moment. Their reactions implied that the Prime Minister is now in a ‘safe zone’. Soon after the SC unveiled its verdict, Maryam Nawaz, daughter of PM Sharif, tweeted pictures of Mian Brothers while ‘celebrating’. These reactions, in the context of Pakistan, were not surprising at all. Historically Judicial Commissions and JITs in Pakistan – from Memogate to Model town in recent time – have failed to deliver justice.

Imran Khan, who has been striving for Panamagate’s investigations since last one year, seemed mentally prepared, apparently on the face of it, for the situation. He looked and sounded hopeful that JIT will effectively probe into Prime Minister’s alleged illegal assets inside and outside the country. Undoubtedly, the time period between now and the final decision of the Panama Case will provide a battleground to political parties and it will impact overall 2018 General Elections.

Read more: Nawaz still in the game: Does Imran still have hope of accountability

Even if we ignore the Panama controversy and all its heat for a moment, an average Pakistani still questions: do our institutions possess enough capacity to bring ‘rich and powerful’ under the cover of justice? A simple answer is: NO. We don’t have to go far to find the reason. There are multiple incidents, even in recent years, where our Judicial system appeared incompetent to provide effective justice – for example in the cases of Ayyan Ali, Dr Asim, Sharjeel Memon, Mushtaq Raisani, Model town, Kasur child abuse case and the list goes on – reinforcing the impression that where ever strong political entities are involved, our Judicial system fails to deliver.

Institutions are a reflection of society; well-aware and civilized societies, as in the democratic west, possess strong institutions. In these modern democracies, unlike Pakistan, all citizens are treated equally. These societies demonstrate high moral values; even minor allegations compel public office holders to leave. However, in Pakistan, we have no such examples. Supreme Court decision and the JIT have thrown yet another test if Pakistan’s institutions will be able to prosecute the ‘untouchable elites’.

Sufian Qazi is a student of International Relations at SZABIST Islamabad. His interests are mainly in domestic and international politics. The views expressed in this article are the author’s own and do not necessarily reflect Global Village Space’s editorial policy.

Previous articleNawaz still in the game: Does Imran still have hope of accountability?
Next articleCPEC’s vulnerabilities: Can Pakistan carve a way out?

24 July 2021
Previous articleNawaz still in the game: Does Imran still have hope of accountability?
Next articleCPEC’s vulnerabilities: Can Pakistan carve a way out?

Nawaz-Jindal meeting: Friendship, diplomacy, or something else?

Is Nawaz Sharif threatening to become the next Mujibur Rahman?