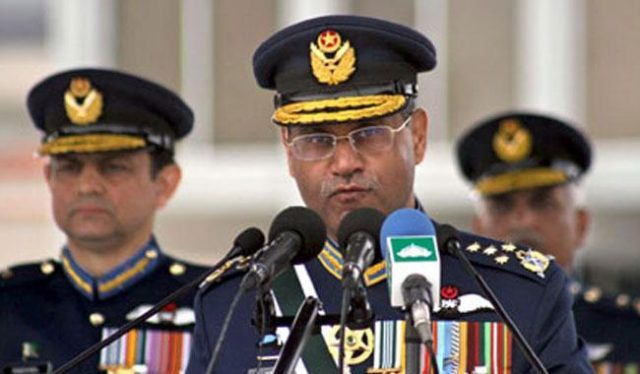 In the morning of 19th March 2018, in an extraordinary ceremony held at Air Head Quarters Islamabad, command of Pakistan Air Force was transferred to AM Mujhaid Anwer Khan. Departing chief, ACM Sohail Aman was given a guard of honor by a fleet of JF-17 thunders, which would not have been a unique sight for the people of Rawalpindi and Islamabad owing to the current 23rd March parade rehearsals. ACM Sohail Aman’s retirement certainly marks end of an area for the elite force of the country.

He graduated from PAF Academy Risalpur in 1980 and was commissioned as Pilot Officer in PAF. He was a certified test pilot as well as a pro-falcon (F-16) rider. Aman was a graduate of Air War College Karachi from where he received his master’s degree in Strategic Studies. He has not only served at different airbases within the country but abroad as well. During his deputation period, ACM Aman was able to fly American F-15 Eagle in Saudi Arabia and Royal Air Force’s Tornado in United Kingdom.

Pakistan has made significant progress in its UAV and missile development programs. The procedure followed before was to outsource the projects in demand to China, but ACM Sohail Aman altered this practice.

Along with several medals of Honor from Government of Pakistan, he is the recipient of prestigious “Legion Of Merit” from US government for the remarkable success of Pakistan Air Force in the war against terror. He took charge from Air Chief Marshal Tahir Rafique Butt on 19 March, 2015 and handed it over to AM Mujahid Anwer Khan on 19 March, 2018. While the appointment of an air or naval chief is not deemed as significant as that of an army chief but Sohail Aman has certainly earned the his place to be commemorated in his 3 year tenure.

It was his polite and composed way of speaking, along with the key decisions he took for the force, which made him stand among the likes of force’s previous greats Noor Khan, Asghar Khan and Mushaf Ali Mir. First and foremost, the much lauded success which Pakistan has achieved in the fight against the terrorism in tribal belt is primarily due to a strategic shift. Previously, the practice was to move in the infantry into the battle zone straight ahead or the target area was softened by means of artillery strikes.

But the artillery strikes lacked precision, resulting in ample collateral damage. When Operation Zarb-e-Azb was launched, the strategy was shifted and fighter jets were used to bomb the hideouts and terrorist sanctuaries. The technology which the 4++ generation fighter jets are equipped with, allows minimal collateral damage, high precision and accurate damage estimate. The infamous Shawal Valley of North Waziristan Agency, also known as the valley of death because of the concentration of extremist, hostile elements, was softened by the continuous bombing of F-16s and JF-17s. This strategy has not only reduced the time required to clear the areas but has also saved lives of many infantrymen of Pakistan Army.

Read more: Should Pakistan have any positive expectations from the Foreign Secretary meetings…

Induction of twin-engine French fighter jets Rafael by Indian Air Force had tilted the balance of power between two forces further in favor of IAF. To counterbalance the edge, Pakistan started the negotiations with Russian Federation for the procurement of 5th generation Su-35 Flanker fighter jets. The deal was quite expensive, having potential to put a dent on country’s GDP for many years to come. Due to extravagant nature of purchase and reluctance of Russians to provide a very important component, Active Electronically Signaled Array (AESA) radar, the idea was dropped.

Engineers at Air Weapons Complex (AWC) were encouraged to work on these projects, and sophisticated cruise missile Hatf-VIII (Ra’ad) and Pakistan’s very own missile equipped UAV, Shahpar were the results ultimatley.

But it was pretty much evident that Pakistan will require the few squadrons of latest 5th generation aircrafts in near future. Keeping in view this future vision, under the leadership of ACM Sohail Aman, Pakistan Air force initiated the “Project Azm”. Under the banner of this project, Pakistan has kicked off the research and development of its own state of the art 5th generation fighter jet. In years to come, when this project will start to bear fruits, ACM Aman will definitely be remembered and praised.

Pakistan has made significant progress in its UAV and missile development programs. The procedure followed before was to outsource the projects in demand to China, but ACM Sohail Aman altered this practice. Engineers at Air Weapons Complex (AWC) were encouraged to work on these projects, and sophisticated cruise missile Hatf-VIII (Ra’ad) and Pakistan’s very own missile equipped UAV, Shahpar were the results ultimatley.

It was the trust which he had put into his engineers and subordinates which resulted in such feats. It is often debated that his open stance of shooting down a US Predator drone crossing Pakistan’s airspace was uncalled for, given the fact that it has never been the policy of Pakistan government. But this is not something as much a big deal as the ones he has done to lift up the air force of Pakistan and it contingents. And he will surely be attributed for the later ones.

Previous articlePakistan vs India: Whose navy is better?
Next articleMark Zuckerberg apologizes for “breach of trust”

21 September 2021
Previous articlePakistan vs India: Whose navy is better?
Next articleMark Zuckerberg apologizes for “breach of trust”

Justice Isa: Should judges be required by law to declare their assets?