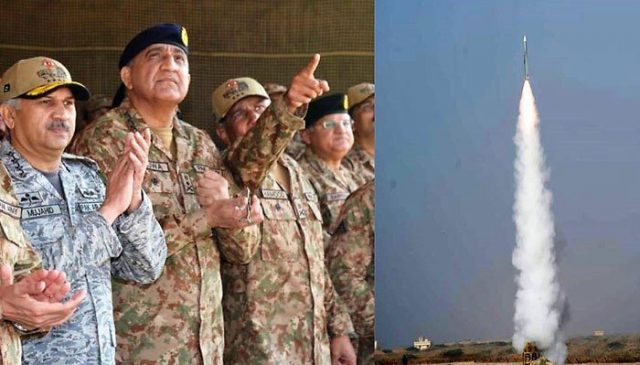 The Pakistan Army Air Defence displayed its firepower capability at Air Defence firing ranges near Karachi. Firing by all air defense weapon systems was the culminating event of two weeks long Exercise Al Bayza-2019. The exercise was conspicuous by the first ever use of the newly inducted LY-80 air defense system.

Interacting with the officers and troops, COAS congratulated Army Air Defence for the successful conduct of firepower capability display. COAS said that LY 80 has greatly enhanced air defense capability of Army Air Defence while strengthening it at the national level along with PAF, the overall custodian of the defense of Pakistan air space. CAS Air Chief Marshal Mujahid Anwar Khan also congratulated Pak Army for induction of LY 80 which has reinforced Pakistan’s overall Air Defence capability.

Commander Karachi Corps, Commander Army Air Defence Command and number of other senior commanders and principal staff officers also witnessed the event. The HQ16A or LY-80 is a Chinese-made ground-to-air defense missile system which was introduced in the Chinese armed forces in September 2011. This is a land-based version of the HQ-16 system used in ships (and fired from VLS (Vertical Launch System) containers.

The HQ-16A is based on a joint development of the Russian Buk-M1 (SA-11 ‘Gadfly’) and Ural/Buk-2M (SA-17 ‘Grizzly’) Surface-to-Air Missile (SAM) systems, for use from mobile ground vehicles and later from ships. The HQ-16A is able to engage aerial targets at high altitude; the mid-range HQ-16 is also able to intercept very low-flying targets at a distance of up to about 40 kilometers, filling the gap between the HQ-7 short-range SAM and the HQ-9 long-range SAM systems. The HQ-16A missile can hit targets of an altitude from 400 to 10,000 meters.

According to the website Armyrecognition.com, the HQ16A (LY-80) missile can intercept an aerial flying target from an 15 m to 18 km of altitude, while its maximum interception range for combat aircraft is 40km, and between 3.5 km and 12 km for cruise missiles flying at an altitude of 50 meters at a speed of 300 meters/second. Single-shot kill probability is a claimed figure of 85 percent against combat aircraft, and 60 percent against cruise missiles. The missile guidance system is of the composite type, comprising initial independent inertial guidance and intermittent illumination and semi-active homing terminal guidance.

The Pakistan Army formally inducted the LY-80 (HQ-16) medium-range surface-to-air missile (SAM) system on 12 March 2017. According to analysts, the LY-80 will become the backbone of Pakistan’s medium-range ground to air defense system, in addition to the HQ-7 command-line-of-sight short-range ground-to-air defense system. Pakistan has also shown interest in the longer range HQ 9 system with a range of 125 km. Reports indicate that  Pakistan has also shown interest in the Russian S-400 air and missile defense system.

Acquiring these air defense capabilities, along with the optimum use of F16s and JF17s, will make Pakistan’s ‘defence by denial’ strategy more potent. Defense by denial is a strategy that aims to make the acquisition of a military objective very difficult for an enemy.

The strengthening of the Pakistan air defence through the induction of the LY-80 also makes Pakistan’s nuclear deterrent stronger. Air defense capabilities make sure that a nation’s nuclear assets survive the initial enemy attack and then retaliate. The survival of the nuclear arsenal is instrumental to acquiring this potential and a strengthened air defense capability is vital for the survival of the nuclear arsenal.

Previous articleHave the dark clouds of FATF started to wither away?
Next articleHuge Jackpot of Rs. 255,182,923 paid out online in a Slot Machine

18 June 2021
Previous articleHave the dark clouds of FATF started to wither away?
Next articleHuge Jackpot of Rs. 255,182,923 paid out online in a Slot Machine

US to Saudi Arabia: No more ‘bombings in Yemen’

Is PTI government ‘the most corrupt regime’ in Pakistan’s history?

Who benefits from a locked down Kashmir?