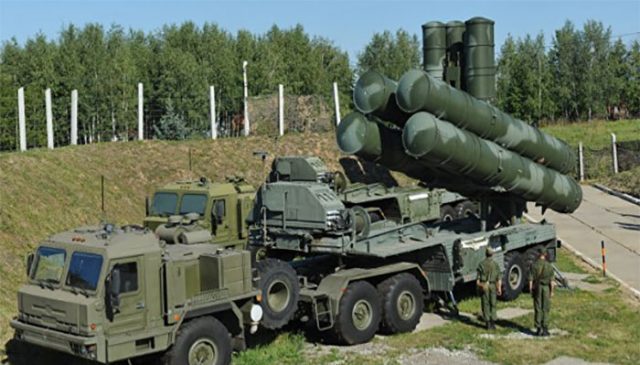 The Indian ruling elite seems convinced that with the modernization of the Indian armed forces and pile up of military hardware, India would be able to shift the balance of power in its advantage which would inevitably establish its hegemony in the region. Pakistan has been struggling to maintain a strategic equilibrium with India, despite its armed forces engagement on the Western border to combat the transnational terrorist syndicate and suspension of the United States’ military aid and Coalition Support Fund.

The encouraging factor is that Pakistan did not express its anxiety over the Indo-Russian recent S-400 deal. It has remained concentrated on its bilateral ties with Russia.

Instead of entrapping in the conventional arms race with India, it has increased its reliance on its nuclear weapons capability. It announced full spectrum deterrence policy and development of the battlefield or low-yield nuclear weapons. Indeed, the buildup of low-yield nuclear devices has caused much hyperventilating in the Western countries and their think tanks, but it has checked India’s Cold Start Doctrine and Pro-Active Military Operation Strategy.

India signed S-400 missiles deal with Russia and also celebrated the September 29, as a Surgical Strike Day to intimidate Pakistan and divert the attention of the opposition from the corruption scandal of Prime Minister Narendra Modi.

Similarly, according to the United States’ posture Review released in February 2018, the Americans were also modernizing their nuclear arsenal. Hence, Pakistan’s diversification of its nuclear capability is not against the trends in the global strategic environment.
President Putin and Prime Minister Modi finalized the S-400 defensive systems deal on October 5, 2018. India’s $5 billion investment in the purchasing of S-400 Long Range Surface to Air Missile System stirred the South Asian strategic environment.

“The S-400 is Russia’s fourth-generation air and missile defense system, accessing aerial targets up to 400 kilometers away, and has the potential to counter threats from ballistic missiles, Unmanned Aerial Vehicles, and aircraft.” It was reported that S-400 is more accurate than its contemporary systems such as Americans Patriot system. However, the strategic analysts have consensus that both defensive systems are not 100 percent accurate and therefore the offensive strikes pierce the defensive shield.

The buildup of low-yield nuclear devices has caused much hyperventilating in the Western countries and their think tanks, but it has checked India’s Cold Start Doctrine and Pro-Active Military Operation Strategy.

The destabilizing factor is that S-400 and Patriot missiles gives a ‘false sense of security and can instill a tendency to pre-empt.’ The S-400 missiles neither destabilize Pakistan’s defensive fence nor make ineffective its offensive strikes. In addition, S-400 will not be able to cover the entire Indian Territory. Pakistani armed forces can easily perforate this kind of defensive shield by using its cruise missiles.

Secondly, they can saturate it with the employment of their multiple independently targetable re-entry vehicles (MIRVs) capability. On January 24, 2017, Pakistan tested its medium-range, surface-to-surface, ballistic missile Ababeel, which used MIRV having capability to deliver multiple conventional and nuclear warheads.

Third, they can reduce the time of detection by forward placing of submarine-launched systems—Babur III submarine-launched cruise missile. The encouraging factor is that Pakistan did not express its anxiety over the Indo-Russian recent S-400 deal. It has remained concentrated on its bilateral ties with Russia. It was reported that the Pakistan Army and the Russian military would carry out joint military drills—Friendship 2018— at the training range of the National Counter-Terrorist Center in the Pabbi Mountains, Pakistan, from October 21 to November 4, 2018. Last year, similar joint drills were held in the North Caucasus.

In summary, the strategic stability in South Asia is being threatened by the offensive posture and induction of lethal weapons by India, but it does not destabilize Pakistan’s deterrent capability.